By all means use sport as soft diplomacy, says the Socceroos coach. But it should be the round ball game.

Socceroos coach Ange Postecoglou has blasted the Turnbull government for choosing AFL over soccer as part of trade negotiations with China. In April Malcolm Turnbull led a trade delegation to China, where he announced that Port Adelaide and the Gold Coast Suns would play the first AFL game for premiership points in China in 2017. But in his book, Changing The Game, Postecoglou claims that the government would make better headway in China if soccer was used as a tool of soft diplomacy instead of AFL.

In a passage of the book, tweeted by AAP Sports journo Vince Rugari, Postecoglou writes that Australia has misjudged how important the round ball game is to China.

“Neither the PM or anyone in his office noticed that Chinese President Xi Jinping is actually a football fan. That around the same time as the trade mission he was outlining his plans for football in China, plans that involve investing billions of dollars, hosting the FIFA World Cup, building the Chinese professional league, opening 22,000 football-specific high schools and working towards winning the FIFA World Cup in 2050.”

Perhaps Postecoglou was just a bit offended by Turnbull’s statements while he was in China, where Turnbull talked up Aussie rules.

“I think as we all know, and I say this as a former mediocre rugby player, AFL is the most exciting football code,” the PM told the press at the time.

Postecoglou needs no convincing that sport is a diplomatic tool, but he thinks that AFL is a square peg for a round hole when it comes to China.

“For many countries in our region, sport is the easiest access point. When it comes to the Subcontinent, our cricket commonality serves us well. But for the rest of Asia, we seem stumped, although we shouldn’t be. Resoundingly, the answer is football.”

“If a prime minister, on behalf of a trade mission and business leaders, is going to impress the Chinese in the world of sport, surely he should use a sport common to both, like football, where Australia and China actually have relations that the Chinese actually care about.”

President Xi’s personal interest in the sport could have been leveraged, writes Postecoglou.

“… it didn’t occur to anyone that having the Socceroos as part of the trade mission might have been advantageous,” he said. “With whom might President Xi have preferred a photo, Timmy Cahill or Gary Ablett Jr?”

Perhaps when his career in soccer is over, the successful coach might move into a role with DFAT. 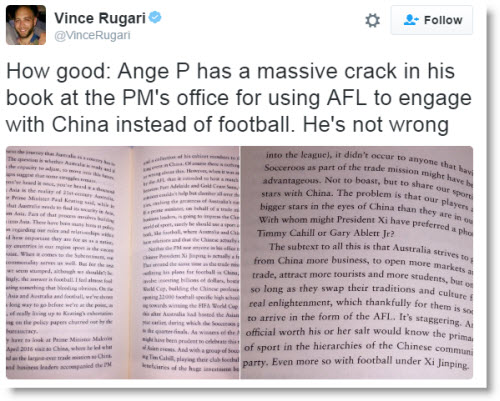 “Any official worth his or her salt would know the primacy of sport in the heirarchies of the Chinese communist party. Even more so with football under Xi Jinping.”

What Postecoglou fails to mention is that the AFL appearance was based around a commercial deal for Chinese property developer Shanghai Cred to sponsor Port Adelaide. This year was the first time an AFL match was broadcast on Chinese television. A common love of soccer could be a sure way to Xi’s good books, but does the round ball sport offer such lucrative financial opportunities? While Football Federation Australia is focusing on growing the A League, the AFL has not only been expanding with franchises in Greater Western Sydney and the Gold Coast, but has been experimenting with overseas audiences. In recent years matches have been played in New Zealand, and China is seen as the next great frontier.

‘does the round ball sport offer such lucrative financial opportunities?’
Are you serious? Are you aware that an A-league club is owned by a Chinese company? (there are a couple of others with Asian owners as well). Are you aware that Chinese clubs play in Australia every year as part of the Asian Champions League? Do you know that many of those clubs are owned by Chinese companies active in Australia? For example Shanghai Greentown Shenhua – owned by the Greenland Group, property developers active in Sydney and elsewhere.

I could go on, but suffice to say that a prime reason Australia was admitted to the Asian Football Confederation in 2005 was Japan, China, Korea etc being aware of the commercial possibilities thus encouraged. And so it has proved.

Still, good luck with that ALF match broadcast in China. Tho it might take a while to catch the viewing figures – in the hundreds of millions – enjoyed in China by the EPL. La Liga etc. Any idea how many Chinese watched the Asian Cup when it was held here last year?

I have lived in Asia for most of the last decade. When we had Australia Network it showed 12 hours of AFL every winter weekend. I never knew any locals who watched it. I know embassies were surveyed in 2010 about AN programs and have presumed it was Aussies in the various embassy, consulate and high commission offices who wanted AFL to continue to be shown.

China seen as the next great frontier for AFL? Good luck with that.

Calling soccer football is marketing on the part of the FFA, and cultural cringe on the part of every other Australian. Thinking that the indigenous game is not worthy, that Australian English doesn’t exist.

Agree. Soccer has always felt that the Australian public owed it a living, and has for at least 60 years bragged that they will take over as number one sport in Australia. They ignore the fact that soccer is nowhere near number one in English speaking countries. Think USA, Canada and New Zealand for a start. South Africa is a special case because non-whites were not allowed to play rugby. Soccer is not the number one sport in Japan or Korea, and is certainly not number one in the Indian sub-continent.
The AFL was craven in allowing soccer to usurp the football name. Why did they quietly drop the names Football Victoria and Football Australia to accommodate soccer. Soccer’s stated ambition is to put the real football out of business. Why help them. Newspapers south and west of the Barassi line continue to confine the word football to the Australian game.