The cost in dead workers of the government’s construction ‘watchdog’

As a bill to re-establish the Australian Building and Construction Commission returns to the political spotlight, what would be the impact of the return of the ABCC on safety in the construction industry? Construction is usually the fourth worst industry for workplace fatalities (behind agriculture, transport and mining, respectively) and in 2015, 33 workers died in the sector, according to data released in recent days by Safe Work Australia.

The data allows us to have a look at the long-term trend in fatalities in the construction sector as a proportion of the overall workforce, and a pattern plainly emerges — a downward trend in construction sector fatalities that commenced before the ABCC was established by the Howard government was halted and reversed while the original ABCC operated, and then resumed after it was “neutered” (to use the word of former ABCC head, hardline IR reform advocate John Lloyd) by Labor. 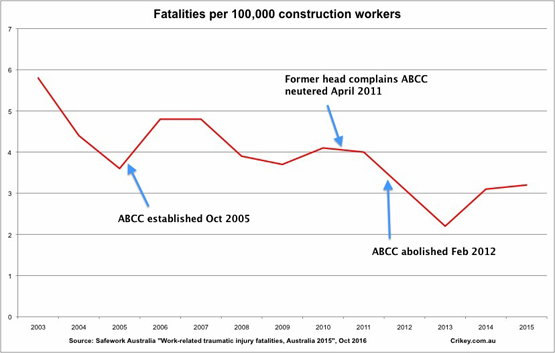 If construction sector deaths return to the average level of the ABCC years, it will mean an extra 10 deaths a year. — Bernard Keane

CFMEU busted for … doing its job

Yeah but they’re probably Labor voters so from the LNP’s point of view that’s a good thing. I mean, it’s not like we’re talking about a political party built on principles and ethics.

What’s a few workplace deaths? Unless it’s in a Labor government home insulation scheme, then it’s a scandalous tragedy.

“For the first eight months of the insulation program, there were fires and some injuries, but no fatalities. This suggests that the safety measures urgently developed in consultation with Minter Ellison and others and implemented by DEEWR were substantially sound.

“By the end of the program in February 2010, only one fatality – that of Marcus Wilson who died of heat exhaustion – had occurred where regulations were complied with.
Improvement in fire safety during the HIP is shown in the detailed fire data here: CSIRO Risk Profile Analysis – Guidance for the Home Insulation Safety Program. [22]

“Specifically regarding electrocutions, tables from the National Coronial Information Service show the total number of deaths over the three years of the Labor government from 2008 to 2010 averaged 13 per year. This includes three insulation workers killed during the HIP.

“So it appears that all the risk assessment and mitigation during the HIP worked effectively in reducing electrical safety risks as well as workplace danger across all construction work.

“It is unlikely there has been another industry in Australia – or elsewhere in the world – where there was such a huge rise in construction activity with an accompanying drop in the rate of adverse incidents as dramatic as that during the HIP.”