Ebeid is wrong on SBS Zela: Former editor speaks out

Michael Ebeid told Senate estimates that no resources were dedicated to SBS Zela before it was shut down. Former editor Danielle Warby says that is wrong. Myriam Robin and Sally Whyte report.

The former managing editor of SBS Zela has broken her silence, disputing the characterisation of the women’s sport website given by SBS managing director Michael Ebeid to a Senate estimates committee.

Ebeid told the committee Zela had been shut down because it wasn’t getting a lot of traffic. The dedicated women’s sports portal was launched at the start of 2016 and was shut down in August. In May, Zela had one of its biggest scoops when it revealed the dire playing conditions in the W League. The posts are still online, but the site has not been updated since August.

Ebeid told the Senate committee that no resources had been taken away from Zela, as, he implied, it had never had any resources to begin with, but was merely an aggregation of existing women’s sports content that was still being covered through SBS’ other sports pages. “It’s not a channel, just a web page that aggregates stories of women’s sports and topics,” he said.

“It’s not closure of the site, it’s just moving the content from one page to a different part of our website. We’re still covering the stories, the topics — the issues will still be there in every way,” he said.

Former managing editor of Zela Danielle Warby has disputed this description, which airbrushes out her work, and that of freelancers and contributors, on the site. Warby was hired initially on a part-time and then full-time basis to work on the site. She has left SBS since its closure. 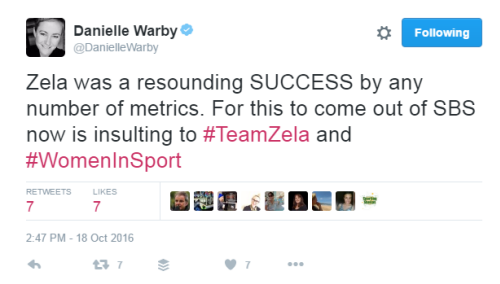 “We’ve found by limiting our stories of women’s sport to one area, you are then reducing your audience base for those stories,” Ebeied said. “But I, and we, think it’s important, that women’s sports stories are shared with a broader, wider audience.”

Senator Sam Dastyari asked if there was “line item funding” directed towards Zela, to which Ebeid answered in the negative. He then asked whether SBS allocated staff to the website, to which Ebeid said “the sports team all contribute to that page”. “Ultimately it is our head of sports who is responsible for that page,” Ebeid said, when asked if there was a person tasked with the website. “If you’re asking me if the decision is a funding cut or saving … absolutely not”. Ebeid agreed with Dastyari’s suggestion that there was no individual cost associated with Zela that had been moved.

Ebeid’s claim describes how Zela operates currently — which is not at all. But it ignores the work of Warby, or that she is no longer at SBS.

“I really am annoyed that this message that women’s sports websites are not sustainable has gone out because he was poorly briefed,” she told Crikey. “It’s frustrating that people will may now think it’s not a viable venture.”

“I’ve been in women’s sports space for 10 years. I know it takes time to build an audience. But with SBS behind us, imagine what we could have done if given time.”

Crikey understands that around $125,000 was initially budgeted to SBS Zela, which included Warby’s salary. She used the remainder to hire a large roster of freelancers and casual female sports journalists, many of which had already been writing about women’s sports for no pay on personal or group blogs.

There was a lot of goodwill towards SBS Zela internally, Warby says, but little structural support. “In terms of accessing content, re-purposing content, taking content from news bulletin — that was practically impossible. There were all these silos of content fighting each other for exposure through the main social channels.”

Currently, SBS’ sports coverage is primarily made up of teams dedicated to individual sports, such as soccer and cycling. Where women compete in these sports, they may be given coverage. But there is little concentrated focus on women’s sport as a whole.

Warby says Zela, which only operated for eight months, did achieve a level of success. It averaged 75,000 views a month by the time it closed. When SBS made the decision to stop supporting the website, Warby says she made an offer to take over its social media channels, which had achieved significant follower counts. She hoped to rename them and use them to keep promoting women’s sports coverage. The offer was refused, and the accounts have now been closed.

Terrible decision to axe Zela just to save what is a drop in the ocean in funding. Then to lie about to the Senate? Disgraceful.

You don’t realise how much a privilege it is to follow sports that have blanket media coverage until you follow women’s sports and leagues. You can’t just look at your phone in your free time and be sure that a news site will have a new article up or more details on the players on that team you want to know about before the season starts.

It’s frustrating and Zela was a constant stream of information. Now nothing, like the hot air in Ebeid’s head.