This week's Essential Report shows that there is little confidence in the ability of the Turnbull government to deliver -- and voters now want a parliamentary vote on same-sex marriage.

More than half of voters have no faith that the government will be able to achieve what the nation needs, while Labor has extended its lead over the government to six points in today’s Essential Report poll.

Less than a third of voters (31%) have some or a lot of faith that the government will be able to get done what the nation needs with the current Senate, while 58% have little or no faith at all, including 39% of Coalition voters. And 39% of voters believe the government will call an early election.

Labor has gained a point on its primary vote, to 37%, while the Greens have also picked up a point to move to 11%, while the Coalition has lost a point to 37%; One Nation is down a point to 5% and NXT remains on 3%. That leads to a two-party preferred outcome of 53%-47% in Labour’s favour, the largest Labor lead since Tony Abbott was prime minister.

Voters’ perspectives on major economic reforms of the last 30 years have shifted markedly since 2011, the poll shows. Compulsory superannuation and Medicare remain the most popular major reforms, supported by 71% and 63% of voters respectively. However, the introduction of the GST by the Howard government — for many years unpopular with voters — is now moving close to mainstream acceptance, with 46% of voters saying it has been good for Australia, compared to 39% in 2011. 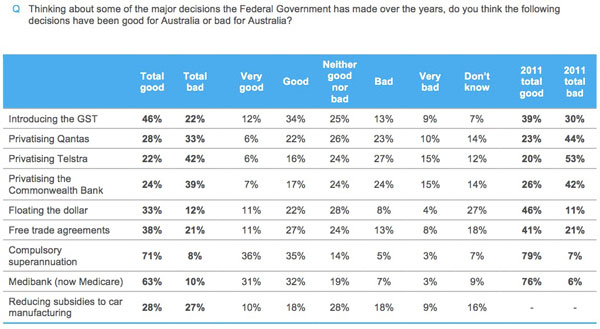 There is also strong approval from voters of Labor’s renewable energy target of 50% by 2030, with 59% of voters backing it despite the cost in additional private sector investment, and just 19% opposing it. Support is strongest among Greens and Labor voters, while 48% of Coalition voters support it compared to 32% who oppose it.

And Mike Baird’s backflip on banning greyhound racing in NSW has limited support in NSW: 44% of NSW voters approve of the reversal, compared to 40% who disapprove. Nationally, approval is 41%-38%, and strongest among Coalition voters. 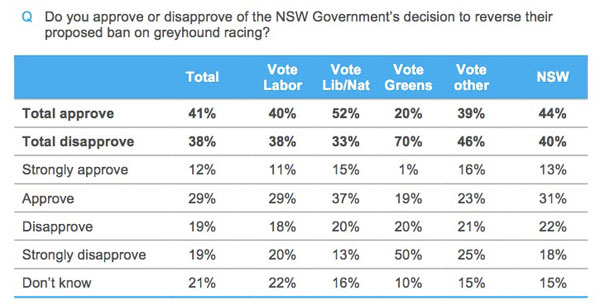 I had to smile at the economic questions the pollster ask: nothing about change, just about “reforms”.

Funny term, “reform”. Sounds like a good thing for all Australians but it’s shorthand for “cuts” and has been for decades.

But we’re not asked these questions, incumbent governments fall in the polls and scratch their heads wondering what they are doing wrong, what is it the public want? After all, they ask the public about the reforms and the public say they are on side with them.

With you 100% Charlie, reform in the current context is the same as deceit and propaganda, and the groundswell against it is rising.
You only need to see the performance of Gloria Nichols and John Roskam on Q&A last night to see the odium that now attaches to their neoliberal claptrap. The LNP won’t even provide a panellist, relying directly now on the IPA to devise and promote their policies.
I thought Nichols was some kind of expert until I found out this morning that she writes for the Australian…enough said, she is in good company there.

I thought your stats re One Nation curious, they are at odds with today’s Fairfax that said they had gained so much since the election that they are now on 10 per cent.

Surely all those one per cent rises and falls are within the margin of error.