is Rikki Lambert going to take Bob Day's spot? ... students try to save The Corkman ... protests in Melbourne ...

What happened to the Tom Roberts coin? Late last year, the great-granddaughter of one of Australia’s most prominent artists gave a prime ministerial staffer a rare historical coin, which the staffer was to ensure was included in a rare public collection. That staffer was Michael Napthali, who promptly lost the coin and resigned. The search for the coin continues, but to no avail.

At Senate estimates on Monday, Penny Wong tried to shed light on what, if anything, was being done to uncover the fate of the rare coin, which had been passed down through Tom Roberts’ family since the painter’s death in 1931. “It’s embarrassing,” Labor’s interrogator-in-chief said to the Department of Premier and Cabinet’s top bureaucrats. For the record, they had no idea who, if anyone, was still investigating the missing coin. The mystery remains unsolved.

Leaky Lambert for the Senate? With news of Family First Senator Bob Day’s resignation comes the fevered speculation on who will replace him in the Senate. One person who has already put his name forward is Day’s chief of staff, Rikki Lambert, who told The Australian he planned to nominate. The father of five had been a Family First candidate in the July election, but he pulled out before polling day.

Lambert, however, is famous for more than his role in Day’s office. When working for South Australian Family First MP Robert Brokenshire, he came into possession of the pay details of the ABC’s top journalists after they were accidentally sent to Brokenshire in a response to an FOI request. Brokenshire himself said he had never wanted the information to go anywhere, but his staffer at that point, Lambert, sent it to a South Australian reporter at the Oz. The scoop embarrassed the ABC and caused no end of internal strife. When the truth of how the data ended up at the paper came out, Lambert was suspended from his role as a media and policy adviser in Brokenshire’s office, though only for a day and on full pay. The “mistake”, as Brokenshire called it, doesn’t seem to have harmed his career much.

Another name doing the rounds is Family First’s No. 2 Senate candidate in South Australia, Lucy Gichuhi. The Swahili-speaking lawyer is a migrant from Kenya, who settled in Adelaide in 1999.

Macdonald off the mark. Chairing a Senate committee is a slightly unusual task, in that one must remain partisan while politely and constructively steering committee hearings and balancing competing demands from member senators. Cory Bernardi, oddly enough, is quite a good and respectful chair while doing his job of protecting the government and running interference against non-government senators. Ian Macdonald, however, is not. You might remember the LNP Senator as the shadow minister dumped by Tony Abbott after the Coalition won in 2013, prompting him to launch a public tantrum and criticise Abbott’s advisers (read: Peta Credlin).

Macdonald chairs the Legal and Constitutional Affairs Legislative Committee and runs its estimates hearings. Last night the 70-year-old Senator at times appeared genuinely bewildered by proceedings, several times asking Immigration officials to repeat themselves and jumbling their evidence in his head — at one stage, apparently thinking there was an opportunity to highlight how much the government spent accommodating asylum seekers, he seized on a figure provided by officials about Nauruan visa fees, until officials had to gently explain that he had the wrong end of the stick. Earlier, seemingly intent on “clarifying” the issue of the non-consultation of the Solicitor-General on the now-infamous citizenship bill, he asked the legal area of the Department of Immigration if they were experts on migration law, before going on to refer to the Department as the “Department of Migration”. Surely the Coalition can do better?

Not so safe schools? A caller to 3AW says that a high-profile politician is set to attend the end-of-year speech night at a Melbourne private school and will likely face a “peaceful protest”. Who could it be? And what would the protest be about?

True marriage equality. While the marriage equality plebiscite is currently off the table, most advocates have retreated somewhat, but one group has decided now is the time to pay for sponsored posts on Twitter. A website calling itself “True Marriage Equality”, which has been registered since August 2015, is using the image of former prime minister John Howard to push its case that opposing marriage equality is not homophobic. It’s unclear who runs the website or why its owners felt now was the time to spend up, but a tipster sent us this over the weekend. Know more? Drop us a line. 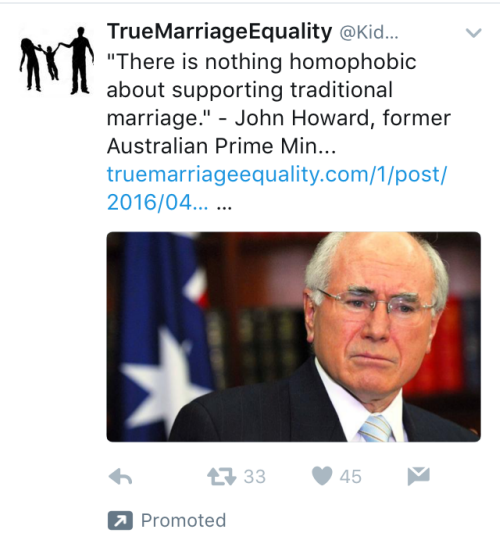 Student watering hole razed. There’s something about university pubs — the memories made therein are often fond, but hazy. In Melbourne students woke up to a hangover like no other on Sunday, when developers razed a beloved drinking venue without permission. Melbourne City Council is considering legal action after developers illegally demolished a 159-year-old pub in Carlton that was subject to heritage overlay. The Corkman, formerly known as the Carlton Inn, was built in 1857 and bulldozed on the weekend, despite a stop work order and a the absence of a demolition permit. The building formerly stood on the corners of Pelham and Leicester streets in Carlton, opposite the University of Melbourne’s Law School building. The Age reports that fines could run into the hundreds of thousands of dollars, and there have also been calls demanding that the developers who bought the site in 2015 rebuild the original facade of the building. It wouldn’t be the first time; in 2012 developers were ordered to rebuild a 90-year-old wall, brick by brick, after a factory in Richmond was illegally demolished.

The developers may find that they have made enemies in powerful places, with a group of Melbourne University Law students taking up the cause. Student Scott Colvin says in a press release that students with many fond memories of the pub are asking for it to be rebuilt. “We’re asking the City of Melbourne to right this wrong and to resurrect an establishment that contains over a century of Melbourne history.” The students have submitted an application to VCAT in attempt to restore their beloved watering hole. Will this be a legal victory to put on a prospective barrister’s CV?

Nauru v Four Corners. The government of Nauru has responded angrily to last night’s Four Corners, which detailed the experiences and mental health problems of children detained on the island nation. The press release labelled the episode “biased political propaganda and lies, and was an insult to the people of Nauru”. Strangely, the press release repeatedly said that the ABC had not filmed or covered particular parts of Nauru’s education and hospital facilities, saying that the program had not been to Nauru:

“The program showed incorrect pictures of schools in a deliberate attempt to misrepresent the facts, while not mentioning the educational facilities across Nauru that are similar to Australian schools, not speaking to any Nauruan educators or principals, and not showing the new school that was recently completed. It also missed the point that if Nauruan schools are good enough for our children, why are they not for refugee children?

“In the same way the program showed the old Nauru hospital which is no longer in operation, and failed to mention the new $27 million state of the art medical facility to which refugees have unrestricted and free access.”

The press release failed to mention that it costs $8000 just to apply for a journalist visa, which is not refunded if the application is rejected. In the past two years the only journalists to have their applications approved are The Australian‘s Chris Kenny and journos from A Current Affair. Would the Nauruan government have approved visa applications from Four Corners?