Rundle: Trump has voters reaching for the pitchforks as things get ugly

Trump's new strategy is to convince his, er, "impassioned" supporters that the election is rigged.

Donald Trump has taken the US presidential election to a new pitch of intensity, telling rallies of his increasingly fervid supporters that the election is “being rigged”, by both the media and persons unknown, and that they should keep a watch on polling places on election day.

This new theme was introduced after a series of bad polls, which have shown Trump running anything from seven to 11 points behind, figures that would have him lose in a landslide, and have him running neck-and-neck in once-safe Republican states such Arizona and Georgia. In the last few days several more women have come forward to accuse Trump of kissing them (with tongue) or sexually molesting them — following the initial claims by three women of sexual assault by Trump on an aeroplane, in offices and nightclubs.

The total number of women now accusing Trump of sexual molestation has risen to 10, all of them describing events pretty much in the manner that Trump had bragged about in the Access Hollywood tapes — and all of them having a look, blonde and tallish — strikingly similar not only to each other, but to Trump’s first two wives, Ivana and Marla.

Trump has flat-out denied any impropriety, claimed that “all these women are making it up” and gone from implicitly stating that some of the women weren’t attractive enough to assault to … explicitly stating it, saying “believe me, she would not be my first choice” and “look at her … I don’t think so” to the roar of the crowd. Trump’s crowds, who now regularly chant “lock her up” when Hillary’s name is mentioned, now use the same chant when Trump mentions any of his female accusers.

The week of scandal over Trump’s history of sexual assault has done fatal damage to his polling, with his numbers among white women falling by as much as 11 points in one week. Among college-educated white women, he is now polling at around 26%, a historic low. That result puts Pennsylvania — dominated by greater Philadelphia — out of his reach.

The daily appearance of new women accusers and Trump’s willingness to go off script at his rallies and denounce them, has kept the story in the news — which, in turn, has led Trump to denounce the media as part of a conspiracy rigging the election. In the one speech where he did stay on script — the day after the first accusations aired fully in video interviews by The New York Times — he gave a thundering account of the world in which the Clintons and the Clinton Foundation were a front for the “international banking elite” whose aim was to destroy US sovereignty.

This shift to hardcore hard-right themes from the depths of the last century didn’t last long. By the next speech, the Donald was back to denouncing Hillary, Bill, the women and the media, and geeing up the “lock her up” chant — which he had, only a few weeks ago, attempted to damp down. Increasingly, there are members of his audience willing to talk openly about “revolution” and not accepting the result.

Both Trump and his flacks, and supportive media, have been using the WikiLeaks “Podesta emails” releases, and their media treatment, as evidence of the conspiracy against him. WikiLeaks states that it has 50,000 emails from Clinton adviser John Podesta’s email account, and has so far released nine batches. Until the most recent drop, all the more interesting stuff was in the early drops: Clinton’s support for single-payer medicine, stated to a Canadian healthcare audience; ego-stroking bankers during a Goldman Sachs thing; telling some Brazilian bankers that she wanted “open borders” — for green energy, the latter detail usually excised; meeja passing-on of questions ahead of a debate with Bernie Sanders. With one exception, they became steadily lamer, the most recent being that she moaned to Podesta that anti-fracking protesters should “get a life”. This exchange, not even involving Clinton, was being run by Fox News:

Frank White Jr. (Democratic fundraiser): “I’m hearing the same complaint in political circles that I continue to hear while fundraising. ‘The campaign doesn’t value black folks and takes us for granted’.”

Podesta: “I have been working on that and will resolve soon. We need to strengthen the overall structure and this is the most critical piece of that.”

Wow, yeah, lock her up. The one exception from the Podesta batch is the revelation that the government of Qatar made a present to Bill Clinton of one million dollars — sorry, *finger-in-mouth*, ONE! MILLION! DOLLARS! — for his birthday, and requested “five minutes of his time” for the presentation of the cheque. Given that the email sender is from the Clinton Foundation, and you know, the proposed giant cheque, it’s obvious that the money is for the foundation. But the absence of explicit statements of such has been used as thin grist for a very large mill.

The fact that the mainstream media is failing to pick up the emails at any length is driving Trump’s supporters half mad. In a way, the scaled series of mini-dumps has minimised the effect of a one-time 50,000 email dump — and drowned out the effect of individual releases. Now it has also drowned out an entirely separate get: emails between the FBI and the State Department regarding the classification level of Clinton emails to be released under the Freedom of Information Act, and a separate request for State to award some extra agent “slots” (i.e. staffing). Once again, there’s not a lot of there, there — the FBI denies any collusion with State, saying that the sender simply talks about two bits of separate FBI-State business in one email.

Trump’s new strategy, of decrying a “rigged election” is being taken by many as a sign that he is now using the campaign itself as a platform for whatever post-election strategy he decides on, following an inevitable loss. That might involve the creation of a cable TV network, which would move into the nativist, supremacist alt-right territory to the right of Fox News, and which may form the platform for a new party.

Other things he’s done, in the past days to hours: torn apart his own autocue machine because it wasn’t working, berated Saturday Night Live for “an unfunny” debate sketch about him, calling for the show to be cancelled, and suggested that both candidates take drug tests before the upcoming third debate because “I don’t know what she’s on”. His attacks on the media have driven his crowds to a new frenzy with the media pen of journalists — situated in the centre of the crowd at rallies — being abused and spat on by members of the crowd. Extra Secret Service agents have been deployed to protect journalists on the Trump beat.

The mood of the election, hitherto merely bummed out, is becoming tense and ugly — with the sense that Trump’s cry of it all being rigged would make a peaceful passage from November 8 to November 9 impossible. “One thing we’ve always been proud of is our orderly transition of power,” all the meeja talking heads have said, shaking theirs in sorrow. Ah, the amnesia! Yeah, apart from that one minor time in 1860, sure.

Trump’s VP Mike Pence is now spending a lot of time hosing down questions as to whether the ticket would accept the result of the election if Hillary won, a mind-boggling situation. As he hoses down, Trump surrogates, such as Milwaukee sheriff David A. Clarke, a Fox News regular, do something else. Tweeted Clarke: 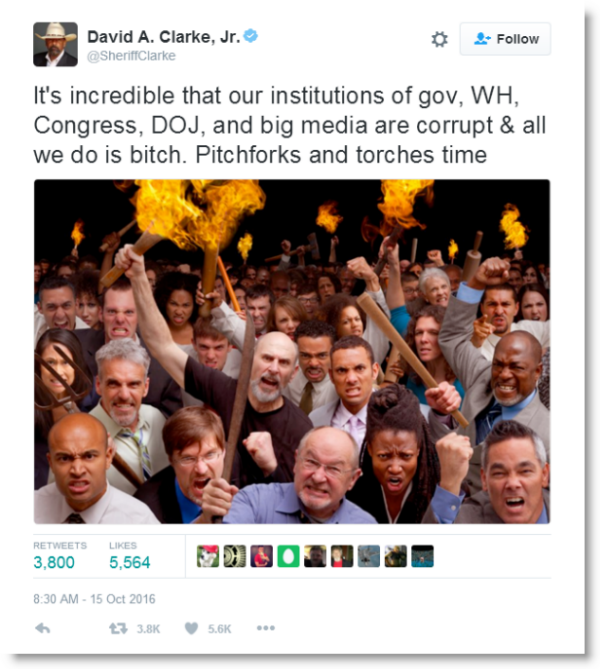 That is an elected law-enforcement official talking.

On the bloodied meatwagon rolls. Sad!

STOP PRESS: Andddddddd … just as your correspondent was sending, news came on the wires of the firebombing of a Republican office in North Carolina. Which Trump, whose surrogates talk of pitchforks and torches, are of course citing as an example of how polls will be rigged.

Trump clearly knows he’s lost otherwise he wouldn’t be making the accusation of a rigged election – because if he won it would already be branded as invalid.

An American pal in Washington State has admitted she intends voting for Trump. She’s 70 years old, white, educated, cashed -up. She claims Clinton is a liar & that Trump is self-funded therefore owes nobody any favours. It’s shocking & disappointing that nothing else seems relevant… including Trump’s misogyny & lack of policies.

It seems Trump does have a policy, …inciting violence, if he doesnt win.

‘That might involve the creation of a cable TV network, which would move into the nativist, supremacist alt-right territory to the right of Fox News, and which may form the platform for a new party’.

I dunno. That kinda assumes Trump is actually interested in politics. That, along with a sustained political perspective, hasn’t really been his history. I would not be surprised if he really doesn’t believe he will lose and, therefore, doesn’t really have a clear post-election strategy worked out.

If he does go for some sort of political life after the election he still faces the same problem: how to appeal to more than his ‘basket of deplorables’ (and, by way of a disclaimer, other well-meaning supporters!). That, especially with an Republican Party that will be totally pissed off with him, will require a ‘tremendous’ effort and organisational machine.

Trump’s attention span will have him bored with that in months.

Now we know where the words in the US Anthem ” land of the freaks and home of the brainless” come from.
And remember how we all fell about laughing when the “Terminator”got to be governor of California?

It’s like the end of Tone the Toole here in Oz but enlarged exponentially by a factor of “X”. There’s really little point expressing disgust or horror at Donald Skunk’s latest affront because you know he’ll go one worse tomorrow. What is truly terrifying is the likelihood of a defeated and humiliated Skunk inciting his deranged supporters to violence. And who will be the targets of such incited violence, d’ye suppose … ???

This is his “2nd amendment people” comment from a couple of months ago taken up to 11.
After Nov 9th I cannot see him doing anything so solid as creating another TV network – personally I doubt that he ever intended let expected to be the nominee, he was just do what the Drumpf does and the base loved it.