Last week we noted that Darren Goodsir emailed his staff using Comic Sans, apparently it's not even a joke, he just likes the font.

On Friday, scribe Myriam Robin told readers of SMH editor-in-chief Darren Goodsir’s farewell to his deputy Judith Whelan. Whelan’s off to the ABC, and Goodsir’s send-off email to the editor, as she noted, was written in comic sans font.

We’ve since been told by several sources that there was nothing unusual about this — comic sans is, for better or worse, Goodsir’s preferred font when it comes to email. And not only that. Two years ago, the SMH put it on the front page. “I love the font,” he told BuzzFeed at the time. His own paper called him “an unreformed Comic Sans criminal”. All of which we should have remembered on Friday … 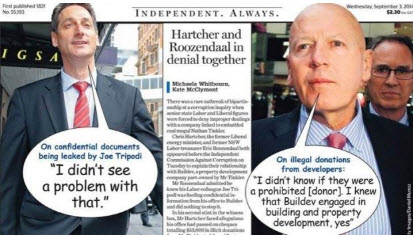