The new One Nation Senator Malcolm Roberts is moving up in conservative circles to be on the same bill as Eric Abetz.

From humble beginnings (like the lowest number of first-preference Senate votes ever to get someone elected), One Nation’s Malcolm Roberts is clawing his way to becoming a darling of the of the conservative far-right, as one of the big names to appear at the H.R. Nicholls Society’s annual conference next week. Liberal Senator Eric Abetz will be giving the keynote speech, while Roberts is listed alongside other “outstanding presenters” shadow industrial relations minister in Victoria Robert Clark and The Australian columnist Judith Sloan. The H.R. Nicholls Society is a conservative industrial relations lobby group, and Liberal Senator James Paterson was once a board member. Abetz has addressed the group before, and it considers senators Bob Day and David Leyonhjelm as its allies in the Senate, but Roberts is a new addition to their usual suspects. 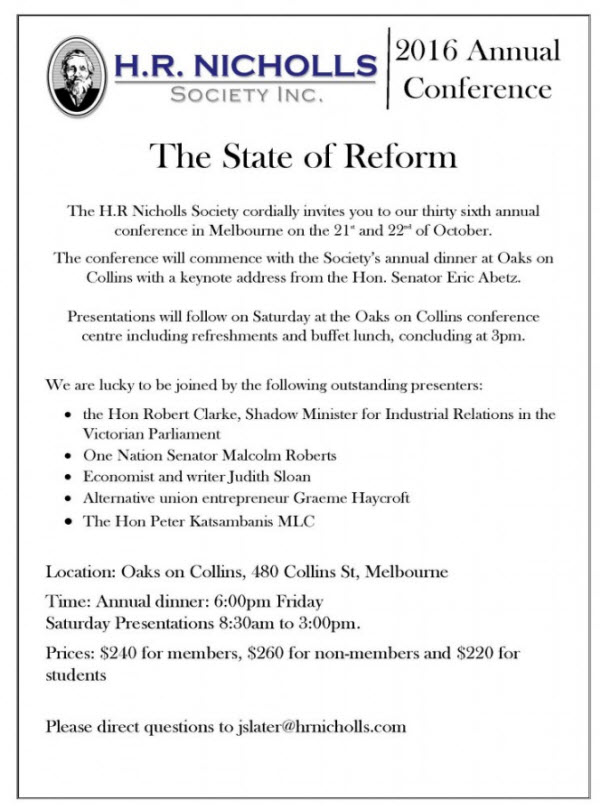 Bob Day, part-time Senator, may or may not be quitting

It says a lot about Judith Sloane that she is prepared to appear in this company…don’t know why the ABC keeps giving her a TV platform (together with other RWNJ’s from the IPA).

The good senator should always be announced by his full title, to wit, One Nation Senator Malcolm-Ieuan colon Roberts full stop comma the living soul.
Otherwise he might become enslaved or, even worse, taxed!

STREWTH! Roberts and Abetz, two deplorables in one basket. Perhaps the H.R. Nicholls Society Inc. needs to have concern for it’s reputation.

Empirical evidence shows M. Roberts only reality of the world is faulty.