Pollies salty at broken fryer. The hot chip is a glorious food — a staple of many Australian menus, and let’s face it, part of our diets probably more often than it should be. These magical pieces of deep-fried potato can fix hangovers and alleviate stress. So spare a thought for our pollies, their staffers and press gallery journos, who yesterday had to face lunch without access to their “dining room favourites” because of a broken fryer. The Department of Parliamentary Services sent out this email yesterday afternoon apologising for the inconvenience of a lunch without chips. The email says DPS will have a “work-around strategy” to make sure today’s lunch has a “full menu” — including chips. Maybe if there had been chips in the Trough yesterday, Assistant Treasurer Kelly O’Dwyer wouldn’t have accidentally voted with the opposition? 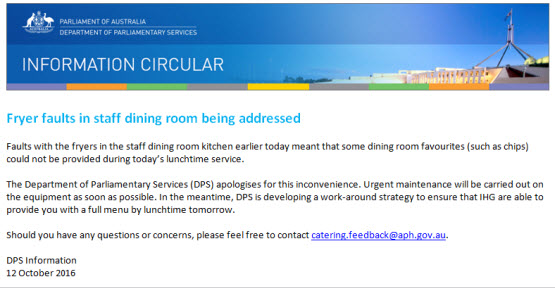 Hanging loose at an Abbott barbecue. Speaking of the food our parliamentarians love to eat, Singaporean Prime Minister Lee Hsien Loong made a few quips about Australian food during his speech in the House of Representatives yesterday. He also noted that one of the similarities between Singapore and Australia is “We are informal and can hang loose!” Hansard is all the better for this inclusion in what is otherwise pages and pages of dry political debate. He also name-dropped Victoria Bitter as a an accompaniment to chilli crabs. The man has good taste. Lee went on to pay tribute to the grilling skills of former prime minister Tony Abbott:

“Thus, when Prime Minister Abbott visited Singapore last year I could invite him to join my constituents for an Aussie style BBQ at a public park, only to discover that he was much better at barbecuing than I was! Afterwards, we went to dinner nearby! I made sure to choose some good Australian wine, but, alas, I neglected to check the steak. After dinner, Prime Minister Abbott asked the chef where the beef was from and the chef, with Singaporean directness and candour replied, ‘From the US, Sir’! I will have to do better when Prime Minister Turnbull visits us next year.”

Gillard warns of violent sexism. Speaking of former prime ministers, Julia Gillard gave a speech in London this week in memory of British MP Jo Cox, who was shot and stabbed to death while the UK was in the middle of the Brexit debate. Gillard says that her message to women looking to enter a career in politics is “you will encounter sexism and misogyny and prepare yourself to face it and ultimately to eradicate it”. She said that before the internet, those who wished to criticise politicians had to put their names to their opinions, but now anonymity has opened the floodgates of abuse:

“Now, both seasoned commentators and the general public can say what they like, protected by the anonymity of a Twitter handle. They have the power to fire barbs directly at their targets without any fear of consequence.

“At best, these can be snarky and occasionally witty criticisms of a politician’s decisions or actions.

“At worst, they can take the form of detailed death threats, or threats of violence against family, friends and staff.

“And of course, as a woman in public life, the violent threats take on another sickening dimension. Threats of violent abuse, of rape, are far too common. A woman in public view may expect to receive them almost daily.”

Gillard has also been quoted in the American media about the prevalence of sexism directed at women in public life, and the often violent form it takes. While anonymity is part of the issue, the safety of the mob means that this Trump rally descended into chants of “hang her in the streets” overnight: 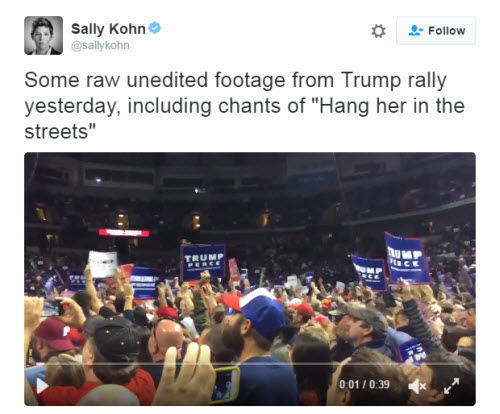 The full speech is here.

All stick. The possession of USB sticks has been banned, or at least limited, at Australia’s onshore detention centres, according to a refugee advocate. At the Melbourne Immigration Transit Accommodation, the USB memory sticks were confiscated, with detainees now only allowed one USB per person. A raid at Brisbane Immigration Transit Accommodation this week has also removed USBs, which were previously allowed. It has been said that no explanations were given for the change in rules.