Think the era of the all-powerful shock jock is over? Think again.

How far does Alan Jones’ influence in Sydney spread? Yesterday’s Daily Telegraph gives us a clue. 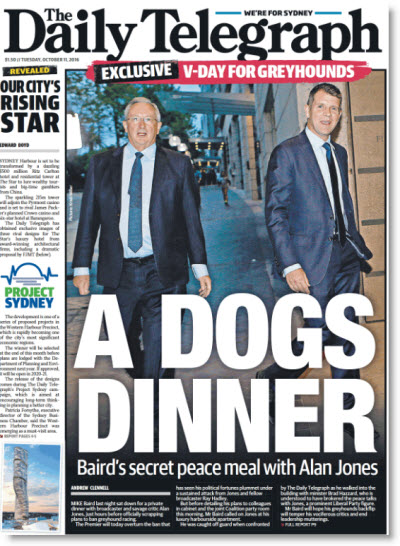 There, on the front page, was the premier of the nation’s largest and wealthiest state entering the home of a 2GB radio host for a conciliatory dinner. It was, both Sydney papers confidently predicted in the morning, a gathering on the eve of a humiliating back-down on the greyhound racing ban for the previously unassailable Mike Baird. A few hours later, it took place pretty much exactly how they said it would.

For Jones, there could be no more vivid demonstration of his authority. Since July 7, when Baird took to Facebook to announce a ban on greyhound racing in New South Wales, Jones had been railing against the decision. In his campaign, he was joined by Ray Hadley, whose show airs just after Jones’. Hadley even took to The Australian to complain about Baird’s ineptitude — allegedly demonstrated by the fact that he hadn’t so far been as giving of his time to the 2GB shock jocks as his predecessors (social media-savvy Baird prefers to explain his positions directly to voters through Facebook). Four Corners’ Gold Walkley-winning report early last year on the use of live baiting (live animals like piglets, possums and rabbits used to train greyhounds to chase) in greyhound racing provided the political justification for the ban, further amplified by findings of the McHugh Special Commission of Inquiry. But through months of relentless campaigning, 2GB took Baird’s justification apart.

This morning, Baird gave his first exclusive interview since overturning the ban — to Alan Jones. The host was gracious, saying the Premier had had “outstanding courage” in admitting he was wrong.

But the papers played their role too, with 2046 mentions. The paper that pressured Baird the most was The Daily Telegraph, which ran numerous embarrassing stories about the ban and gave the issue free rein in the letter and opinion pages, which were regularly full of criticism of Baird. And no story on the politics of it all was complete without a photo op with a photogenic greyhound-owning family, who loved their dogs and just wanted the freedom to race them … 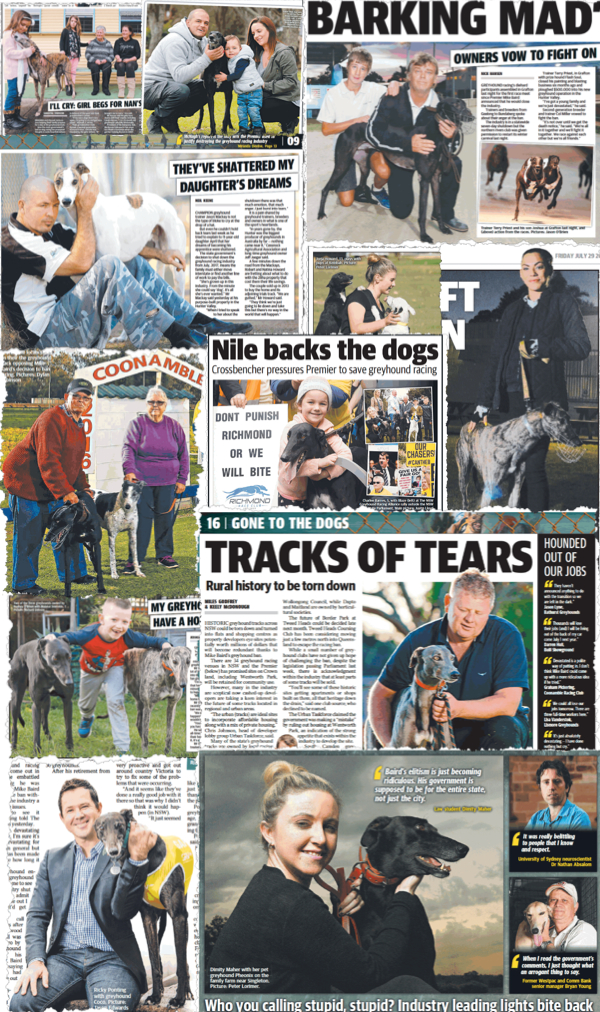 This morning The Daily Telegraph lauded its own role in bringing the ban down. But it was, like Jones, gracious in victory. The Premier could learn his lesson and “emerge tougher, stronger”, never again to believe his personal popularity meant he could ride roughshod over the working class.

The media firestorm wasn’t hard to predict, says veteran Sydney editor Peter Fray (formerly editor-in-chief of the Sydney Morning Herald and until last year deputy editor of The Australian). He says it’s one of the bigger campaigns he’s seen in decades of close involvement in the Sydney media.

“You need several ingredients to have a great campaign,” he told Crikey. “You need a political dimension, which this had. It had a very strong human dimension. It had animals, which led us to another ingredient — a strong inner-city v the suburbs and regions argument. And at its height, this was about something that Alan Jones and the Telegraph explicitly believe in — the right of small business to operate without government interference. There is an ideological underpinning to this argument. Some people might see greyhound industry as a bunch of cowboys with no interest in their dogs, but the Telegraph and 2GB saw them in the main as people who cared about their dogs and ran small businesses. There was a lot of ground to campaign on.”

Given how Jones operates, it’s likely his influence on the issue went far beyond his radio show. The veteran host is a born lobbyist who wields his clout as much through his political, business and media networks as through his listeners, Fray says. Jones is unwavering once he decides to go on the warpath.

For the record, Fray doesn’t think the media alone forced the backflip. He points to the role played by a genuine grassroots backlash that fed through to the inboxes of Coalition MPs, as well as the looming byelection in Orange. “The media were amplifiers of that,” Fray said.  It takes a “pretty robust politician” to survive such an onslaught. “That with the combination of forthcoming byelection in Orange, and the prospect of a deputy premier being rolled, went into the perfect storm for Mike Baird.” Baird himself says the change of policy came as it had become clear to him that “we underestimated the community’s desire to give the greyhound industry one final chance to reform”.

Still, the state has now witnessed the spectacle of the Premier grovelling to Jones the night before the announcement. Fray doesn’t think the media did anything wrong in pressing the issue. But even he acknowledges of the visit: “That’s not a good look.”

The real reason for Murdoch’s war on greyhounds

The upside for NSW voters is that there is no longer any need to hold elections as the State is now run by shock jocks; saving them a lot of money. They just need to tune into 2GB to find out how the State should be and will be run.

I think talk-back radio and tabloid media are still powerful, only because most politicians over estimate their influence on the community. Mike Baird could have stood firm and proved this point. However he chose to buckle under pressure, and now the point same will be proven through the damage the back flipping will do to his political career.
The other thing that this episode (along with its federal parallel, the plebiscite) demonstrates is the deepening ideological divide within the LNP. Which it seems is even greater than the divide between the factions of the ALP. The coalition will not be able to stage manage this for much longer, because it, unlike the divisions within the ALP, reflects one of the biggest real ideological divides within the community.

So destroy the lives of the good greyhound people ?
Hate to think what you would do to a mosque.

There certainly will be more live baiting and it is probably happening as I write this. How else do you get greyhounds to chase fluffy toys around the track. Mike Baird’s original decision was the right one and if he is truely a man of principle, he should resign and campaign against animal cruelty.

Maybe Alan Jones should put his thoughts towards allowing his fellow travellers to get hitched.

The shoutjocks at HateCentral 2GBigotry are going to be (even more) insufferable now – who needs the Drumpf when we have these bloviators?