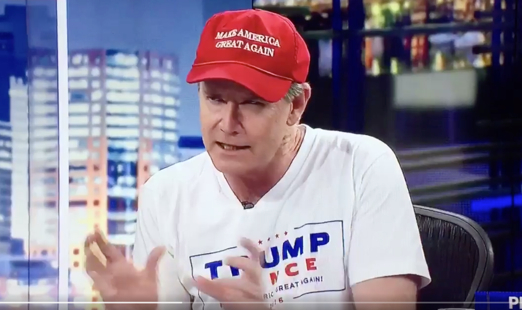 Last night’s Paul Murray Live featured a panel of Graham Richardson, Janine Perrett and former MP for Parramatta Ross Cameron discussing the issue of that Donald Trump tape. You know, the one where he boasted that he was so famous he could sexually assault women and get away with it.

While most of the panel was scathing (“he’s a pig”, said Murray), Ross Cameron said the whole thing had made him even more pro-Trump (“I respond to this tsunami of sanctimony that we are getting from the greatest bunch of hypocrites who ever walked and breathed, and I am exactly where I was, except even stronger.”). He had a rather novel take, complete with props: he stripped to a campaign T-shirt and cap when the discussion started. Here’s Cameron:

“Let me give you a basic biology lesson, which may not be universally welcome but is actually based in fact, that’s the inconvenient problem. The human race is made of mammals, and in order for the race to continue, as with every other species, they must find a means of reproducing, which means bringing together a male and a female. Now, I’m saying to you that this is a victory for women. The Trump conversation tells you that in the private moment, at the end of the day, when the bloke is sitting down with his mates, the thing that his mind turns to is the female of the species. The female is the celestial body around which the male orbits. She is the [wiki?] to which the male will always, in the end, return. She is the dominant figure in human history. The rise and fall of civilisations may be renamed, ‘who gets the girl’. That’s what it’s about. And I’m saying to you, and we’ve got a birth rate … five years before I was born we had a birth rate of 3.5 in this country. Today, we’re at 1.78, and that’s one of the reasons government spending is at a crisis, because there’s no babies left to pay for it. But we’re not allowed to talk about fertility. We’re not allowed to talk about the basic principles … we’re not allowed to talk about chicks. Surprise, surprise.”

Needless to say, much of the panel raised objections following the spiel.

Several media figures have uploaded partial clips of the exchange on Twitter. You can listen to the full comments on the podcast here (beginning at around the 36-minute mark). Those with Foxtel Go can watch the full video on last night’s PM Live, which gives you bonus cut-aways to Janine Perrett’s face as Cameron goes on. It really adds something to the experience. 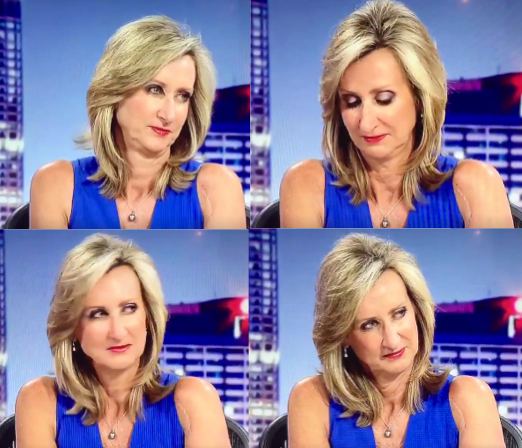 Murray quickly said that Cameron was “being theatrical” about the whole thing. The man himself tweeted this morning: “This is not a psychotic episode, this is a moment of clarity.” Perrett, Cameron’s co-panellist, says the outburst took the panel by surprise. “My face says it all,” she told Crikey, though she did add that given the circus the US election campaign has turned into, perhaps it kept in the spirit of things.

“That’s Ross — he’s very theatrical,” she said. “Very unique.” Indeed, it’s not hard to call to mind other “theatrical” comments by the former elected representative, such as the time he went on a massive Twitter rant about Jews being “magic” and the time he said Hillary Clinton used a colostomy bag. — Myriam Robin

Yet another failed, self-important bore on Sky

We do have a problem where economics is attempting to dictate to human biology and is failing. Ross is therefore partially correct, but not in the way he intended.
Our birth rate reflects that humans, both male and female, don’t reproduce until they believe they are secure. These days for men and women in Australia that means; career on track, secure roof over head, followed by found right person! Now that means both parties are in their thirties which in turn means, biologically, they have the fertility one expects of people in their thirties – which is considerably and often unexpectedly lower than those in their twenties.
Sadly this then exposes many to the high cost of fertility programs, a great deal of anxiety, disappointment and inevitably fewer kids.
Our Economy is meant to serve the human population, not the other way around.
As a society we have sadly lost sight of that – particularly Ross!

And you might add that the rise in casualisation of the work force, part time work and short term contracts, add to uncertainty, diminishing the security needed to start a family.

I too long for the days when women lacked reproductive freedom and just had baby after baby, regardless of their circumstances or wishes.

But I really need to know what “She is the wiki to which the male will always, in the end, return” means. Can somebody please advise me what a “wiki” is.

Hey. I really wondered about that. A couple of people in the newsroom heard the video and we all thought he said ‘wiki’. But we have no idea what it means! Maybe he said something else and we misheard.

Wookie? That’d be catering to a niche, even after Cameron’s tastes are factored in…!

Well, let me have a stab, MR and SP. I am guessing -if he did use ‘Wiki’ – that Ross has a hippieish mind picture of Earth Mama Female as a collective fecund Wiki to which us puny male wiki ‘contributors’ can’t resist returning again and again, adding to the sum total of humankind in barely noticeable individual (ahem) ‘dribs and drabs’ (or maybe if you’re lucky fits and spurts) which never-the-less collectively add up to shape the progressive evolution of our species.

And if that irresistible poetic imagery ain’t enough to float your boats, ladies, perhaps you can understand why some of us have to resort to just grabbing at youse without asking :-/…

With apologies for my gender’s excesses, of which all of us are guilty at least a few times in our lives. It’s mostly because we’re intoxicated by you into boorish stupidity and ineptitude. Mostly.

If I recall, Ross Cameron took families very seriously, to the point where he had two. Sanctimonious twit, though he did once describe me as an unforgettable character.

On second thoughts, it’s true it isn’t a psychotic episode, he is that big of a twerp. What a world. My great grandad was a Yankee gold rush miner who was an Abe Lincoln man to the core. What he would make of a party that had such a collection of numbskulls, spivs and fools that Trump was the solution I cannot begin to imagine. He may well have reached for his six gun.