The latest global economic news is mostly excellent, though better for some countries. We now have figures on most of the world’s economies for the last quarter of the 2015-16 financial year. This enables comparisons with earlier periods, including Australia’s last three years (almost) of Coalition rule with the previous administration.

For the entire period 2009 to 2013 Australia’s economy was the best performed in the Organisation for Economic Co-operation and Development. Alone in that club of 34 wealthy democracies, Australia maintained positive growth, kept most workers employed and increased productivity, incomes and wealth. Australia was the toast of the economic world.

Three years later, Australia is the stand-out economy again, but for the opposite reason. Australia is the only OECD member not to record improvement over the last three years in any of the six key indicators of economic health. Let’s look at them.

Australia’s unemployment rate at the end of June 2013 was 5.7%. That ranked sixth in the OECD, behind only Norway, Switzerland and powerhouses Germany, Japan and South Korea. (Data is from tradingeconomics.com unless shown otherwise.)

The rate at June 2016 was higher at 5.8%. Only seven other OECD countries are in this invidious position. The other 26 economies now have all improved since 2013. Australia now ranks 14th on jobs.

Wages in Australia rose over the year to June by just 2.1%, the lowest rise since the Bureau of Statistics series began last century. That’s well below the 2.9% to June 2013. We know executive salaries have boomed recently, so this suggests many low-income earners have lost income.

Wages rose over the same period by an average 3.04% across the OECD. Only six of the 34 countries reported lower wage rises than Australia.

Australia is in a record streak of 18 months, with the trade deficit worse than -$1.6 billion. For 10 of those months it was below -$3 billion, and in one month plummeted to an unprecedented -$4.14 billion.

Of the 34 OECD countries, Australia alone is in record-low territory. Fourteen countries are in steady surplus, while seven are cycling comfortably between deficits and surpluses. Of the 13 in deficit, five are quite shallow, and all but Australia, Canada and Iceland have improved over the last three years. Of these three strugglers, Australia is the stand-out loser. 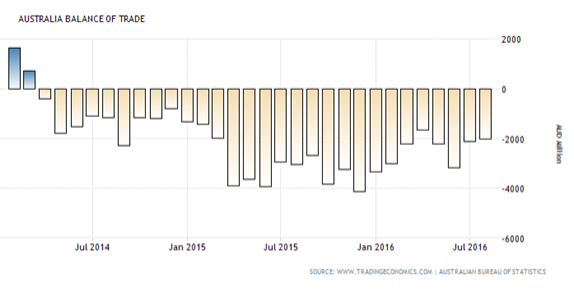 Three years ago, only two of the 34 OECD countries ran surplus budgets as they emerged from the global financial crisis (GFC) — Luxembourg and Norway. Now eight are back in surplus, and the majority have reduced their deficits substantially. Only six are running deeper deficits than in 2013: Australia, Chile, Denmark, Finland, Mexico and Slovakia. Of these, Australia is the worst performer, having blown its budget deficit out from -$18.8 billion in June 2013, or 1.2% of gross domestic product (GDP), to a staggering –$39.6 billion, or 2.4% of GDP, in June this year.

In contrast, most well-managed economies are now steadily reducing their debt. Only 11 of the 34 OECD countries have increased debt in each of the last three years. Of these, five have increased it by more than 5.5% since 2013 — Finland, Japan, Mexico, Slovenia and Australia. 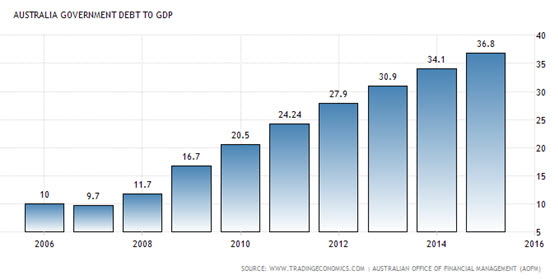 The rate of growth of Australia’s GDP in this year’s June quarter was 0.5%. This is below the 0.6% of the June quarter of 2013 and below the current OECD average. Australia now ranks equal 16th among the rich nations, down from 13th three years ago.

Of the 34 developed OECD countries, no fewer than seven have advanced on all six variables. Leading the pack are Germany, Ireland, Hungary, the Czech Republic, Poland, the Netherlands and New Zealand. Another six have gained in five areas — Denmark, Iceland, Luxembourg, Sweden, Italy and, surprisingly, Greece. Seventeen economies have improved in three or four areas, bringing to 30 the countries enjoying the fruits of the current sturdy global recovery.

That leaves just four laggers. Three nations have advanced on only two of the six variables — Chile, Finland and, perhaps another surprise, Canada. Just one country — Australia — has failed to advance on any indicator, keeping GDP growth steady and declining in the other five.

The conclusion thus seems highly probable: Australians have swapped the best economic administrators in the developed world for the worst.

Perhaps the one success the Coalition can claim is that the mainstream media has no desire to report what is actually happening.

Alan, don’t you that the Liberals are better economic managers than Labor ? Every time I hear a Liberal politician rabbiting on, they ALWAYS claim that only they can manage the economy. When will the Australian public wise up and realise they LNP from Fraser, to Howard/Costello, Abbott and Turnbull are hopeless.

The current economic state is a direct result of the collapse of our exports in natural resources.

To say the whitlam government was a better financial managers than Fraser is ludicrous.

When Howard took over from Kea ting interest rates were sky high and the country in recession. The howard years were fiscally responsible and had solid growth.

Sorry Mr Buchanan, you are playing the usual Liberal card of selectivity. The article makes clear that in the period from 2009 till now, virtually every economic indicator has turned down or been at best sluggish. And this following the worst global downturn for decades. Direct result of natural resource export collapse? Bollocks if I may say so.

Next you will be wanting an effective policy for industry.

While the Coalition government of the last 3 years certainly hasn’t been helping, the wider picture explaining our recent poor economic performance surely is the end of the resources investment boom (hence Canada and Brazil being in similarly weak growth territory), coupled with decades of deindustrialization and declining public investment in growth-enhancing infrastructure, plus the general drying up of non-resource sector private capital investment (particularly since the GFC). The economy’s problems today have far deeper roots than 3 years of appalling Coalition economic stewardship.
The sad truth is that (post-Keating) Labor governments have been just as complicit as Coalition ones in failing to prepare the economy for the future, with governments of both stripes increasingly relying on the RBA to merely ‘manage’ tg-term futurhe economy as best it can without support from either government fiscal policy or ‘lone’ policy. A return to Labor government – if that is the remedy implied by Austin saying the economy has been ‘flushed down the gurgler’ by the Coalition government – is extremely unlikely to turn the economy around. We are not in a dip – we are in a secular slide – one that was fortuitously but only temporarily masked by the recent resources investment boom.
Rebooting long-term growth now will require a whole new paradigm of governing, one able to unify national opinion around a plan for our economic future, justify massive productive public infrastructure investment, motivate a parallel explosion of productive private investment, and all the while able to successfully navigate the enormous perils of the structural re-ordering of the global economy currently underway. Neither Labor nor the Coalition have the faintest clue about – or, let it be said out loud, interest in – promulgating any such revolutionary new paradigm of governing. Consequently, I genuinely fear a number of economic ‘lost decades’ for Australia loom. (And no, the Greens can’t be hoped to help.)

bjb
Reply to  Will

“Neither Labor nor the Coalition have the faintest clue about – or, let it be said out loud, interest in – promulgating any such revolutionary new paradigm of governing.”
You’d have to agree, however, that it is more likely to happen under Labor. The only “reform” the LNP ever countenance is pandering to the rent seekers – the LNP is a party with zero vision.

Will
Reply to  bjb

No, I would disagree. Both are capable of reformist actions. Labor doesn’t have a monopoly there. Think about it: Would a Labor government ever attempted the automatic weapons elimination Howard achieved? And wasn’t it widespread public enthusiasm for Turnbull’s (formerly) reformist inclinations that facilitated his unseating of Abbott? Moreover, what evidence is there now that Labor politicians are any less sectional-interest driven than their Coalition colleagues, when the core challenge is to redefine and recommit to pursuing the national interest? No, Labor of present at best offers merely to soften the coming pain a little more than would Coalition, addressing none of the causes and so simply fueling further tribal polarisation.

Dog's Breakfast
Reply to  Will

Clutching at straws there Will. Yes, Labor would have pursued that automatic weapons ban, and Howard could do so because he had Labor’s full support.

The Howard Costello years are the real wasted years. Once again the stats show that Swan did a marvelous job in more trying circumstances, while the LNP are hamstrung with ancient notions of neo-liberal economic theories that died a natural death for the thinking economists years ago.

The LNP are far more ideologically bound than Labor to fix some of the mess ahead of us.

Charlie Chaplin
Reply to  Will

Well said, Will. Decades of tripartisan Neoliberalist economic policy brought us to this. While ever the focus continues to be on chasing surpluses and greater austerity, nothing will change.

In fact, the deficit will increase: the more people thrown out of work, the lower the tax take, the higher the deficit.

Debt’s a little different. There is no financial need for the government to borrow money. It does so to issue risk free investment opportunities to the private sector who buy the debt. It’s a form of corporate welfare.

The next 3 years is going to smear the Libs in an economic stench that wont wash out for generations. Not even Napisan is going to get that “we blew the economy” stain out of their undies.

I hope so Ben, the myth of the ‘better economic managers’ has never been supported by the facts.