A pro-greyhound racing lobby group has celebrated the Baird government's backflip by threatening participants in the inquiry that led to the ban.

A key pro-greyhound racing lobby group has celebrated its victory in NSW by threatening witnesses who revealed the industry’s abuse of animals to the McHugh inquiry — the NSW special commission of inquiry that led to the brief ban on the industry.

National Greyhound Racing United describes itself as “a greyhound racing lobby/advocacy group, with the structure of a business that is seeking to unite our industry, educate the public on facts, promote and protect the sport.” Despite appealing for donations on its website, the body is well funded — according to industry sources by a prominent greyhound breeder — with a number of full-time managers across the country.

Understandably, the Baird government’s decision today to reverse its ban on the industry was welcomed with delight by the group on its Facebook page. But the industry’s focus is already turning to payback: yesterday, in anticipation of the ban, the group issued this threat on Facebook:

“The NGRU has been going for almost a year now, so this won’t stop our fight against the animal extremists … whom now have been dealt a massive blow! We will enjoy this victory, then we will turn our attention to those that made submissions in the McHugh report, their crime will not go unpunished.” 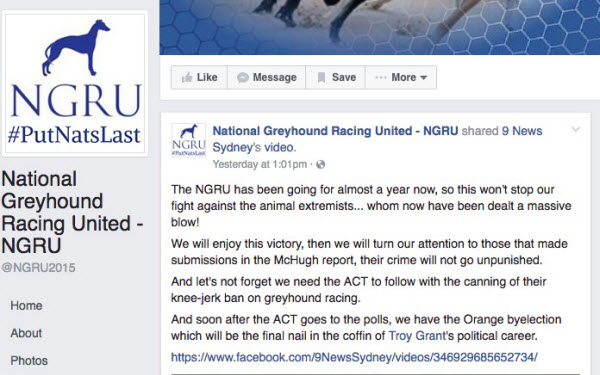 By focusing on submissions rather than on direct evidence, the threat may avoid s.326 of the NSW Crimes Act, which states that “a person who threatens to do or cause, or who does or causes, any injury or detriment to any person on account of anything lawfully done by a person: (a) as a witness or juror in any judicial proceeding … is liable to imprisonment for 10 years.” The McHugh inquiry notes that only submissions tendered during hearings were received as evidence by the commission.

A number of whistleblowers from within the industry or who had worked with the industry provided information to the NSW government inquiry headed by former High Court Justice Michael McHugh. The McHugh reported revealed that tens of thousands of dogs had been slaughtered in industry “wastage” and that the industry and its NSW body were still covering up incidences of animal abuse and torture while the inquiry was underway. The inquiry received over 800 submissions as well as hearing from 43 witnesses in private hearings. It relied extensively on evidence from witnesses about the massive extent of live-baiting within the industry, including ten witnesses ordered to appear under summons “whom it suspected of being engaged in live baiting, to give evidence in public hearings concerning the practice. Nine of the 10 admitted that they had engaged in this barbaric practice. The other person denied having engaged in the practice, but the Commission is comfortably satisfied that he had. The nine witnesses gave various descriptions of their views of the extent of live baiting in the industry.”

Left and right revel in the pointless cruelty of greyhound racing

Not the greatest of their crimes of course but incorrect use of “whom” is typical of stupid, uneducated people trying to sound clever.

The McHugh reported revealed ? think you need to spell check your story.

maybe you should take note Maureen ! when labeling others stupid.