Think of the children. Opponents of marriage equality are ramping up their attacks on same-sex marriage and the Safe Schools Program in a flyer delivered to Melbourne homes last week. The shadowy Marriage Alliance group, which reveals little about who runs it and whom it represents, delivered a glossy pamphlet entitled “An important message for your family” to homes in the leafy suburbs of Melbourne’s south-east, in the electorate of Goldstein, held by gay Liberal MP Tim Wilson. Wilson publicly supports marriage equality and has previously opposed a national plebiscite on allowing same-sex marriage.

The pamphlet only mentions marriage once, but it spends many pages talking about the Safe Schools program, which has been the latest focus for anti-LGBTI groups, claiming that “Safe Schools promotes the idea of gender fluidity to children as young as four years old”. 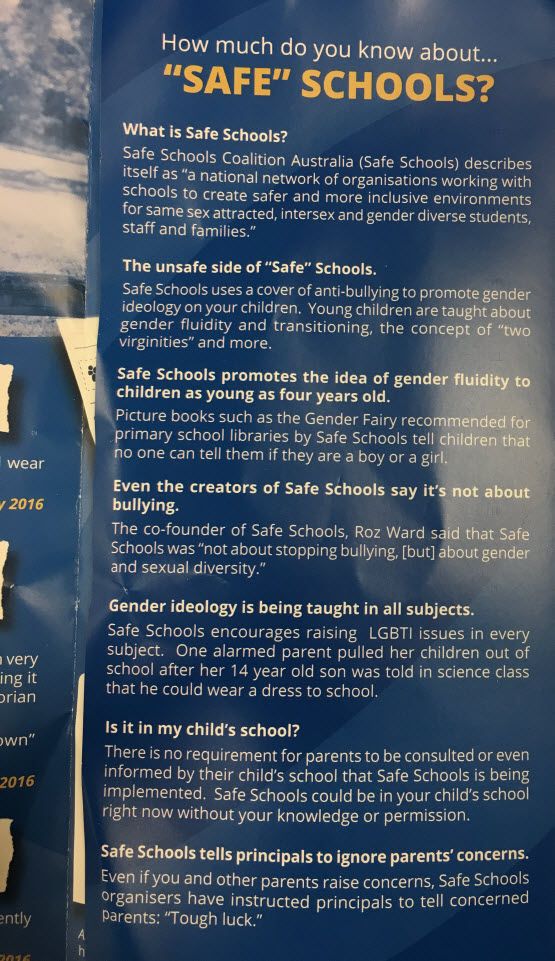 It includes headlines from the Herald Sun and The Australian and references picture book The Gender Fairy, as well as the Safe Schools All of Us resource. 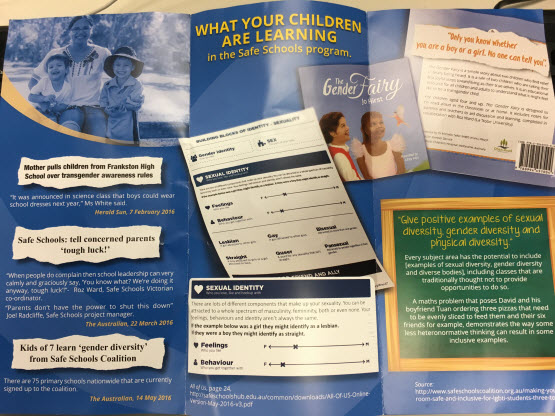 It only becomes clear at the last page that all of this is related to marriage equality, not to education policy.

Is this what we can expect from the same-sex marriage plebiscite debate?

War of the posters. Voting for ABC staff’s new enterprise bargaining agreement opens tomorrow, even though the two unions that represent staff at the national broadcaster haven’t agreed to the terms in it. As reported in Crikey, ABC director of people Rebekah Donaldson told staff that the new deal would be voted on because “After 26 weeks of negotiations, it is obvious we are at an impasse with the unions. Given the three offers and the concessions already made, we feel it is the right thing to do to go directly to a vote.”ABC unions the Media, Entertainment and Arts Alliance, and the Community and Public Sector Union weren’t parties to the EBA vote, but they haven’t opposed it. They are, however, urging members to vote on taking part in a “protected action”. A tipster tells us that the lead-up to the vote was getting heated on Friday:

“ABC staff and Management are in poster war of attrition leading up to the ABC staff vote on their new employment conditions. Management are plastering signs around ABC headquarters promising a 2% payrise but strangely there’s no mention of all the cuts being made. Meanwhile, the employees are plastering the walls of Ultimo with posters detailing the cuts. But no sooner than an employee poster goes up, ABC Management have taken it down. I’ve never seen so many ABC Managers move so fast, running around the building hunting and gathering paper. It’s like a management scavenger hunt.”

Work for free! The City of Sydney Council is advertising for an unpaid “New Year’s Eve Media Internship”, in which it asks for someone to work, “two to four days per week for three months starting in late October and working through to late January. The successful candidate must be available on certain key dates, including 1, 29 and 31 December.”

The internship is targeted at final year media and communications students, and the advertisement says the unpaid intern will have “excellent writing and research skills”, “knowledge of the Australian media landscape”, “strong social and digital media skills”. It describes the intern’s tasks as assisting with administrative tasks and press releases, and producing an evaluation report at the end of the event. The intern would also need to work for free on New Year’s Eve. It doesn’t mention what experience or skills the intern would gain over the three-month period of almost full-time work. 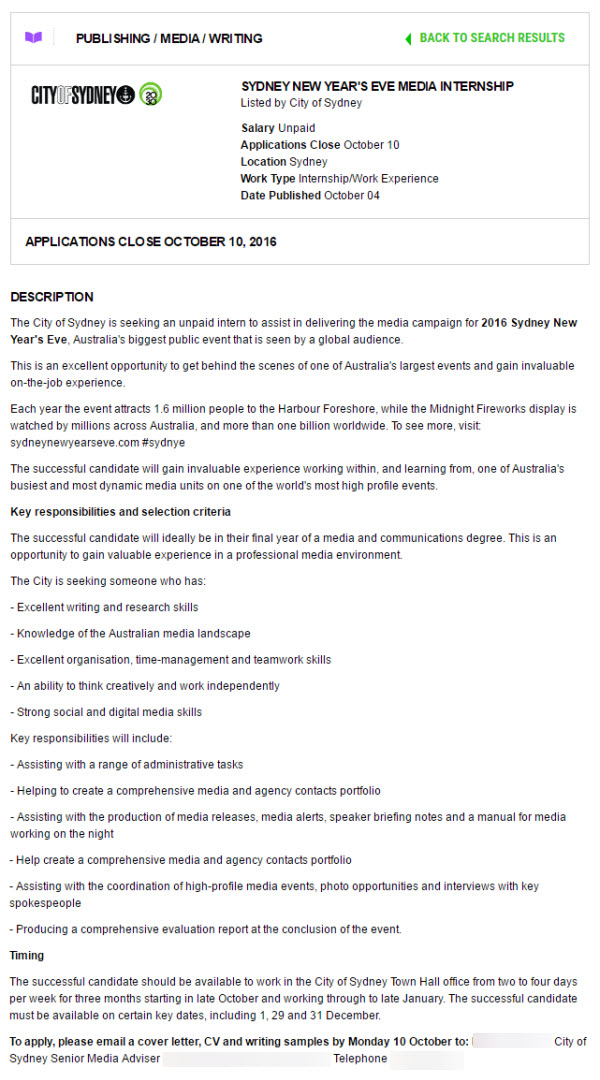 Yes, the Sydney City Council is so poor that they advertise for a slave to work for them. Sorry, I forgot, slave owners used to feed their working slaves.