Barely a fortnight ago, human civilisation appeared to be tottering at the edge of an abyss, as presidential opinion poll aggregators and forecasting models began to suggest the unthinkable.

With Hillary Clinton’s unsteadiness at a 9/11 commemorative event having put meat on the bones of Donald Trump’s insinuations about her health and stamina, a surge in support for Trump brought him within a single point of the lead on national voting intention, according to the RealClearPolitics poll average.

This represented particularly challenging new terrain for Nate Silver of FiveThirtyEight, whose forecasts had long performed the unacknowledged function of giving rattled liberals a pacifier whenever a troubling poll result came through.

Just such a situation was in play at the present stage of the cycle in 2012, after Republican nominee Mitt Romney scored an unexpectedly solid win over Barack Obama in the first of the three debates.

While many individual polls found Romney gaining the lead — particularly from the venerable Gallup organisation, which would ultimately be left with egg on its face on election day — Silver’s model had Obama’s win probability bottoming out at 61%.

But in the immediate lead-up to the first Clinton-Trump debate on September 26, FiveThirtyEight had Trump at a new peak of 46%, with no sign that his momentum was slackening.

Back when the model showed Trump struggling to clear 20%, it was customary to emphasise the delicacy of the situation with recourse to Russian roulette analogies. Now it appeared there were an extra two bullets in the chamber.

[Rundle: the devil comes to Colorado]

Sometimes though, a little of the native wisdom that Silver’s data-based approach appeared to discredit in 2012 doesn’t go entirely astray.

The dramatic swing back to Clinton over the past fortnight would not have come as a surprise to anyone who has been paying attention to Trump’s discipline, Clinton’s debate form and the movements of the polls over the full course of the campaign.

The latter point can be illustrated by the following chart, which records trend measures of opinion polling over the last three presidential elections. 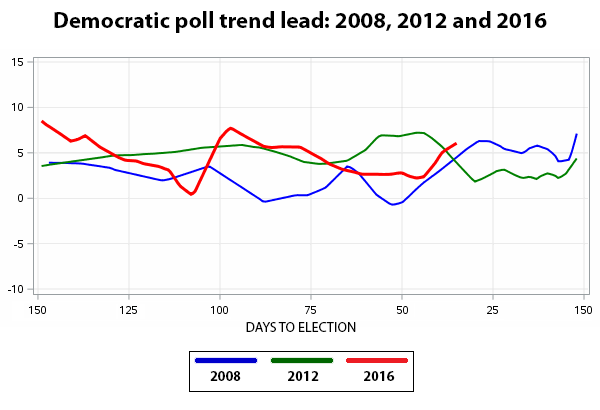 So far as national voting intention is concerned, Clinton’s position has been broadly similar to that enjoyed by Obama until the final month of the 2012 campaign, without any indication that Trump will match Romney’s feat of narrowing the gap in the home strait.

History is repeating to the extent that the first debate signalled a shift in the mood, but whereas the change in 2012 served to make the race more competitive, this one has had the opposite effect.

It was a somewhat different story in 2008, when Obama and his Republican opponent, John McCain, were evenly balanced until mid-September, when the unfolding financial crisis entered a new phase with the bankruptcy of Lehman Brothers.

This is helpful in illustrating the kind of paradigm shift that will be needed if Trump is to wind back Clinton’s current blowout lead.

Certainly Clinton isn’t poised for a Reagan-style landslide of the kind that liberal opinion might think the situation warrants, with Trump at least guaranteed of victory in the Republican bedrocks of the prairie states and the deep south.

Indeed, a repeat of 1984 is probably an impossibility in America’s dangerous new age of ideological polarisation.

Nonetheless, the poll trend clearly illustrates that Clinton’s floor is at least 1% higher than Trump’s ceiling, and that fluctuations over the short-term have occurred around an equilibrium that favours Clinton by around 5%.

As has been the case since day one, the election is Clinton’s to lose — and time for her to do so is fast running out.

Do anti-establishment voters trust media polls enough to be honest?
Does not NSA record everything?

Interesting to see the Trump Tapes become so polarising and significant. Especially given Trumps huge swathe of more recent, public and overtly prejudiced comments. Makes you wonder if the Republican party core really care about this one issue or were simply waiting for the next scandal / opportunity to distance themselves from a dud candidate who they already knew was dead in the water and likely to drag the party down with them.