Brandis reveals plebiscite details to advocates. Attorney-General George Brandis told LGBTI advocates that a plebiscite on marriage equality could be Australia’s only chance to legalise same-sex unions in the near future, and warned that marriage equality wasn’t inevitable. In a phone meeting with 30-40 representatives of LGBTI groups yesterday, Brandis and the groups stood firm on opposing sides, with the Attorney-General told repeatedly that LGBTI groups did not want a national vote and the debate that would precede it.

A tipster who was on the line tells us there was some confusion about the purpose of the meeting, with Brandis appearing to believe that the advocates would be presenting terms on which they would find a plebiscite acceptable. “It ended up not being the best use of his time or our time,” our insider says. Brandis did reveal some information on the finer points of the bill, saying the legislation to change the Marriage Act wouldn’t be bound by the language of the plebiscite bill. This means that while the plebiscite question refers to “same-sex couples”, the change to the Marriage Act is likely to read “two people” instead of “a man and a woman”. Some advocates had been concerned that the inclusion of the term “same-sex” could exclude non-binary people (those who identify as neither male or female) from future changes. Brandis said that although it was not the official position of the government, he believed that conscientious objection should be maintained for ministers and civil celebrants, but that he would not be recommending “general commercial exemptions” in discrimination laws — meaning that bakers and florists would not be granted legal exemptions from providing services to same-sex weddings.

While Brandis said that there would be no expedited or dedicated complaint process for advertisements during a potential plebiscite debate, he did say that advertising by the publicly funded Yes and No campaigns would need to be approved by a committee. It’s unclear if that committee would be the same one that is set to decide which groups get funding. While the Labor Party has not confirmed that it will be blocking the plebiscite bill, comments from Opposition Leader Bill Shorten make it a foregone conclusion.

Shadow attorney-general Mark Dreyfus will be on a call with the same group of LGBTI advocates tonight.

REA directors ask for a pay rise. REA Group is the dominant online real estate business in Australia and it is more than 60% owned by the Murdochs’ News Corp. Lachlan Murdoch saw the potential years ago and convinced the company to take an early stake, and then support it through the tough years. So successful has been the investment that the New York gang who run News (then sole chair Rupert Murdoch and CEO Robert Thomson) bought Move, a smaller but similar real estate website business in the US for around US$1 billion. REA has a market value of around A$7.3 billion. News’ value is around A$11.3 billion, so if REA catches a cold, News freezes financially.

So successful is REA that there seems to be a revolving door between News and REA. REA directors who were once at News include Hamish McLennan, the former CEO of the Ten network (appointed by Lachlan Murdoch, a big shareholder in Ten, as is Foxtel) and Richard Freudenstein, the former CEO of Foxtel who was replaced by Peter Tonagh, a former REA Group director. News Corp Australia boss Michael Miller is another REA director. Will Lewis, the head of the Dow Jones Co in New York and formerly at News in the UK, is also a former REA director.

Directors are set to get a pay rise at the REA annual general meeting in November. The REA Group’s notice of meeting was issued this morning and reveals:

That’s a proposed increase of close to 58%. At a time when wages are growing at 2.1% at best and less in some sectors, and when News Corp itself is cutting millions of dollars of costs at the Australian newspapers this year, REA Group and News are proposing to give some of its executives and others on the board an huge increase in fees. It’s also more than 50 times the current rate of inflation. We know real estate is booming and Sydney and Melbourne house prices continue to rise, but a 58% rise?

Council ballot papers lost in the mail. Crikey journo Sally Whyte was excited to receive her postal ballot paper for the upcoming Victorian council elections, but she was a bit confused when it turned out to be for a council area hundreds of kilometres away. The Victorian Electoral Commission is investigating how a ballot paper for Shepparton City Council got posted to Melbourne’s inner suburbs: 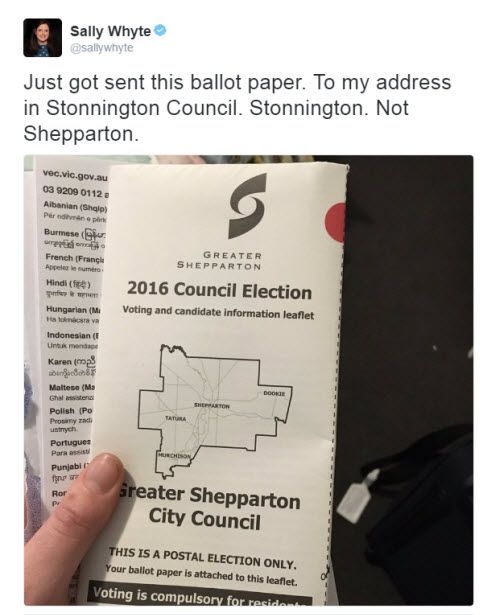 Hipsters will decide who comes here and the circumstances in which they will come. The Australian Border Force and Melbourne do not seem to mix. The customs and border security body yesterday “postponed” a planned information session for new recruits, after the Close the Camps Action Collective found out about it and called a snap protest. The information was aimed at helping out the organisation’s traineeship recruitment scheme, that sees young people put through a 12-month program that could see them undertaking Customs work — overseeing cargo, in a mail centre, at airports or ports — or the more delicate matter of “border security”, by working at immigration detention facilities. Information sessions for the roles have gone off without a hitch in New South Wales and Western Australia, but recruiting in lefty Melbourne seems to pose certain challenges. Mind you, we’d have thought knowing how to push your way past ratbag protesters would be a useful skill in the Border Force.

Flooded detours great for a joyride. A tipster in Victoria’s flooded north east tells us that while some locals were trying to safely avoid flooded roads, some flashy cars were drawing attention to themselves for all the wrong reasons:

“In the Victorian North East there has been some rain and some flooding and some more rain and eventually the Great Alpine Road from Wangaratta was closed at Eurobin, just a few K’s short of Bright. All traffic was diverted via Ovens and Mount Beauty — a pleasant extra 100ks. The 40ks between Mount Beauty and Bright is excellent driving country, steep climbs, tight corners, tons of fun, unless of course you’re in the middle of pissing rain, slippery roads, heavy traffic — including trucks (since all Bright <-> Myrtleford  traffic was on this road, both ways) and various groups of cyclists are having a pedal bash up the hill as well (I know right — WTF were they thinking!).

“So, who were the arseclowns in the 6 Audi demonstrators having a bit of a burn up through the Bright to Mount Beauty road — cutting corners, braking heavily — generally going for a full on kidz blat up the hill. I know there were 6 because they were conveniently numbered with a special high-viz number in top-passenger side window. Not all were being plonkers but the 3 of the first 4 were. If they had UHF radios tuned to Ch 40, they sure as shit know who I am.

“Seriously, I love Audi’s, great cars. The inverse hedgehogs driving them, not so much.”

Ms Tips was unfamiliar with the term “inverse hedgehogs” and asked a friendly petrol head. It means “Love the car, hate the driver — the pricks are on the inside”.

When Brandis met the ACL on gay marriage: our FOI denied