‘A danger to the Republic’: what conservative papers say about Donald Trump

Donald Trump has turned even the reddest of Republican-leaning newspapers cobalt blue this election. Here are what some very conservative papers say about him.

Hillary Clinton is making some unusual new media friends, or more accurately, Donald Trump is making some unusual media enemies. Conservative newspapers, newspapers that have never endorsed a candidate for president and a magazine that has only endorsed two previous candidates (the lofty Abraham Lincoln and Lyndon B. Johnson) have got on the #neverTrump bandwagon. In some cases, this stance is costing them readers, and it seems to be having no effect in the polls. But here is what some US outlets are saying about Trump:

(The Atlantic, which has only endorsed two presidential candidates in its 157-year history)

(Dallas News, which has not endorsed a Democrat since before World War II)

(The Cincinnati Enquirer, which has not endorsed a Democrat for more than 100 years) 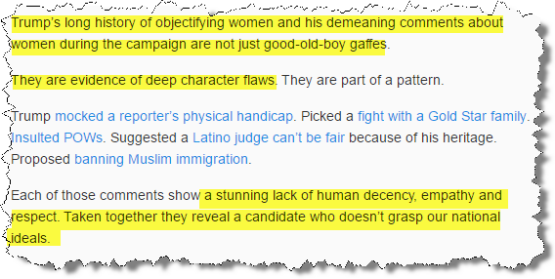 (The Arizona Republic, which has never endorsed a Democrat in its 126-year history)

(The San Diego Tribune, which has never endorsed a Democrat in its 148-year history)

It would be encouraging if Trump voters could read. But as Donald said. “I love the uneducated!”

The Drumpf’s love of the uneducated has been bottomed with his appeal to the soon-to-be dead to vote for him so that they can save the country they won’t live see.
Beyond parody.