Senator Derryn Hinch prefers to keep his shirts untucked. But two of his fellow crossbenchers -- along with a Lib and a very cross security guard -- take a very dim view.

I was photographed at the Dispatch Box on the floor of the House of Reps in Old Parliament House recently, and it brought back some nostalgic memories of the prime ministers and opposition leaders I interviewed, and sometimes jousted with, on radio and television.

Including one who refused to speak to me for so long that I took the only position possible: I banned him.

In the early 1980s, Malcolm Fraser refused to come on my 3AW radio program. Maybe because I’d referred to him as that “po-faced souvenir from the Easter Islands”.

The ban lasted for more than two years. Adding insult to injury, he appeared on almost every other program on the station. The final straw was when the PM appeared on the weekend fishing program.

For a bit of satirical fun, I took Fraser’s answers from that interview and played it on my current affairs program next day.

When he was talking about trout fishing and where the trout were jumping, I posed the question: “Is it true that you have such a cabinet of yes men that when you say ‘jump’ they jump?”

And, taking his response to a question about how few fish he’d caught last time out, I asked: “What are you going to do for pensioners in the next budget?”

“Nothing … absolutely nothing.” And there was talk about being stranded up a creek.

The PM was not amused. The boycott/ban continued until that day in 1983 when Fraser called a snap election to catch Bill Hayden off-guard — not knowing Labor was already making the switch to Bob Hawke.

We knew the election winds must be blowing against him because suddenly the prime minister dispatched an emissary to one of my lengthy Friday Rat Pack lunches to call for a truce.

The white flag carrier was David Barnett. The negotiated interview was flagged with full-page ads in The Age along the lines of “they said it would never happen …”

I did my research, stayed off the turps, had an early night, and … Malcolm Fraser walked all over me. He filibustered, a knack he was good at. Like the old union man John Halfpenny, the PM could almost keep talking on the inhale. Just hardly drew breath.

I also recall that, despite the studio being packed with TV cameras and reporters, David Barnett was quite unabashedly kneeling on the floor alongside Fraser and occasionally handed him 8×4 cards with suggested answers printed on them.

That was the day where the seed for “shame, shame, shame” was sown — but that’s for another day. 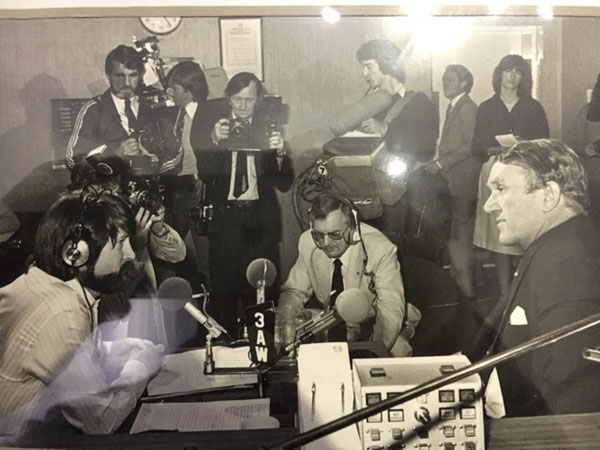 Sartorial elegance is an issue that seems to consume some people in the nation’s capital. And I’m not talking about Nick Xenophon turning up for a marathon session in his jammies as a stunt.

It is not a prerequisite for a senator to wear a tie. I do. The Greens’ Peter Whish-Wilson doesn’t.

But another fashion decision has caused me some angst. Well, caused some confusion for other senators.

For years, I have followed the fashion, and comfort, trend of not tucking in a business or dress shirt. In the Senate, or at a desk, with a jacket buttoned up, nobody is any the wiser.

But two senators (David Leyonhjelm and Nick Xenophon) have gestured to me as if my fly were undone and a staffer for Ken Wyatt tried to wise me up when we had a photo op for the Transplant Games.

But the best response came from a female security guard at the Senate entrance.

She alerted me to the errant piece of shirt. When I explained “It’s called fashion”, she said, “Well, if I were your mother, I’d give you a smack!”

Brings back memories of a childhood ditty I couldn’t find on Google, which went something like:

Jimmy Jimmy Jout (?)
Your shirt’s hanging out
Five miles in
And five miles out.

My tweet of the week: At the Fair Work hearing over the CFA in Victoria’s Parliament House, Greens Senator Lee Rhiannon was struggling to find a vital clause in the massive EBA book.

Couldn’t help it: she’s now “a rebel without a clause”.

Not going to be seeing pink shorts, safari suits, or polo necks then? 🙂

Do Crikey have to print this drivel from Derryn? Starting to look very tabloid. Moreover now that he’s said the only thing he stood for, ie naming supposed pedophiles, shouldn’t he just resign and let somebody who is interested in broader politics ( and isn’t a hypocrite, ie ‘never voted before’!) take his seat