Well now, it’s official. Former PM Kevin Rudd won’t be the next Secretary General of the United Nations, after the Security Council announced it had chosen Antonio Guterres, former PM of Portugal, to take over from Ban Ki-moon next year.

“Antonio Guterres?” We hear you ask. “But that doesn’t sound like a woman? And last time I checked Portugal wasn’t in Eastern Europe?” Right on both counts.

Advocates and the UN selection process had previously pushed for the next Secretary General to be a woman, and the practice of sharing senior roles around geographically meant that it was eastern Europe’s “turn”, so some saw Guterres as an outsider. Head of UNESCO Irina Bokova, sometimes touted as the favourite for the role, came in fourth in a series of straw polls conduced by the Security Council. Guterres received zero “no” votes in the straw poll, with 13 in favour and two abstentions. So how does Kevin Rudd feel? He’s sent out a tweet congratulating Guterres, saying “a great responsibility now for a troubled world”. 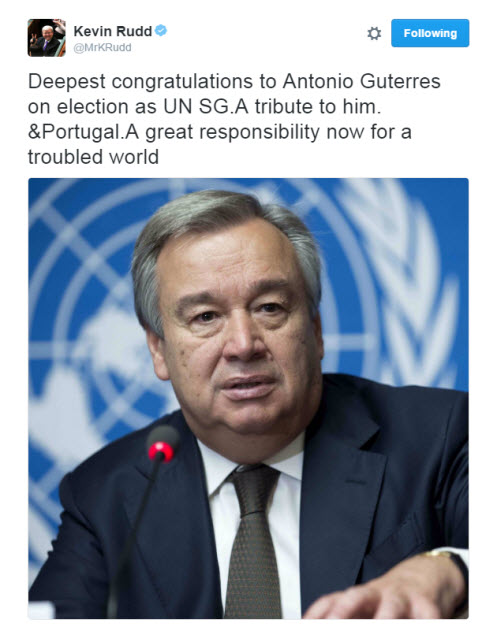 Like Rudd, Guterres has held a high-profile role in the international sphere since ending his time as prime minister, but unlike Rudd, Guterres had the support of his country’s government. In January, Portuguese Prime Minister Antonio Costa endorsed Guterres for the UN spot, a very different narrative than that which played out in Australia.

Uncovered: why Gareth Evans missed out on top UN job