Was the South Australian blackout caused by renewable energy? The report from the market operator seems to provide ammo for both sides, writes InDaily editor David Washington and journalist Bension Siebert.

However, “following an extensive number of faults in a short period, 315 MW of wind generation disconnected”. The report says:

“The uncontrolled reduction in generation resulted in increased flow on the main Victorian interconnector (Heywood) to make up the deficit,” the report says.

“This automatic-protection operated in less than a half a second at 16:18.

“The event resulted in the SA regional electricity market being suspended.”

The report found that in the lead-up to the blackout, generation reduction occurred at six wind farms.

“There was no reduction in thermal generation.”

However, additional analysis was needed to determine the reasons for the reduction in generation and voltage levels.

The report does find that both back-up providers contracted by AEMO to restart the network after “going black” experienced problems — both due to issues that are unrelated to the debate on renewables.

Researcher Dylan McConnell, from the Melbourne Energy Institute at the University of Melbourne, says the report does not provide clarity about whether the state’s renewable energy mix contributed to the blackout.

“It could have also happened to a gas turbine [the loss of generation], but we don’t know at this stage,” he told InDaily. “The report is sufficiently ambiguous at this point to not necessarily provide a great deal of light on some critical issues.”

As a result, the report will do little to stem debate over the contribution of South Australia’s renewable energy generation to the event, with lobby groups and politicians rushing to put their own spin on the report’s findings.

Premier Jay Weatherill said yesterday: “The blackout was triggered by a weather event.”

The Premier lashed out at Prime Minister Malcolm Turnbull for linking the blackout to South Australia’s aggressive renewable energy targets.

“Malcolm Turnbull, our PM, took the first opportunity to lecture South Australians about the dangers of renewable energy, and for the Labor states in promoting unrealistic renewable energy targets,” he said.

He said the reality was that wind farms had been unable to operate because of the three “shocks” to the system caused by the downing of transmission lines.

However, the state opposition argues that the AEMO report contradicts the state government’s claim that the system was operating as it should when it shut down.

“Premier Weatherill is denying any responsibility for the blackout,” he said. “The government said at the time that the electricity system worked exactly as it should: the AEMO report today said that it’s actually not possible to say that.”

He repeated the opposition’s calls for an independent inquiry into the blackout and clearly pegged the blame for the event on SA’s renewable energy generation.

“The preliminary report by AEMO suggests we need to think differently about how we run a decarbonising electricity system, reflecting the significant differences between using conventional thermal generation compared to a mix with higher levels of intermittent renewables,” Warren said.

“Of key importance is how the mix of generation in a high renewables grid responds to events like the sudden loss of transmission in the mid-north of the state and the supply that it was carrying that triggered events last Wednesday afternoon.”

[Wonder why the Coalition dislikes renewables so much?]

The AEMO report found that immediately before the storm brought down the transmission lines, SA wind farms were generating 880 MW of power, with SA gas-powered stations generating 300 MW, and 610 MW coming to the state via two interconnections with Victoria.

AEMO says that while the event was triggered by extreme weather, it would conduct a “thorough investigation” into how each component of the energy system responded.

The report includes a table explaining the events — which occurred in seconds — showing a cascading stream of disruptions.

Below are two key charts from the report, showing the generation mix just before the storm brought down the transmission lines, and the sequence of events that led to the blackout. 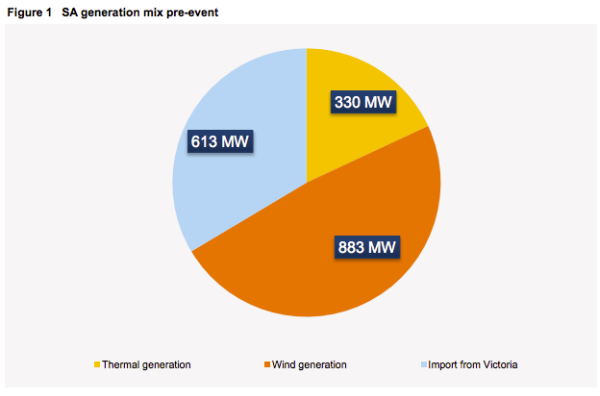 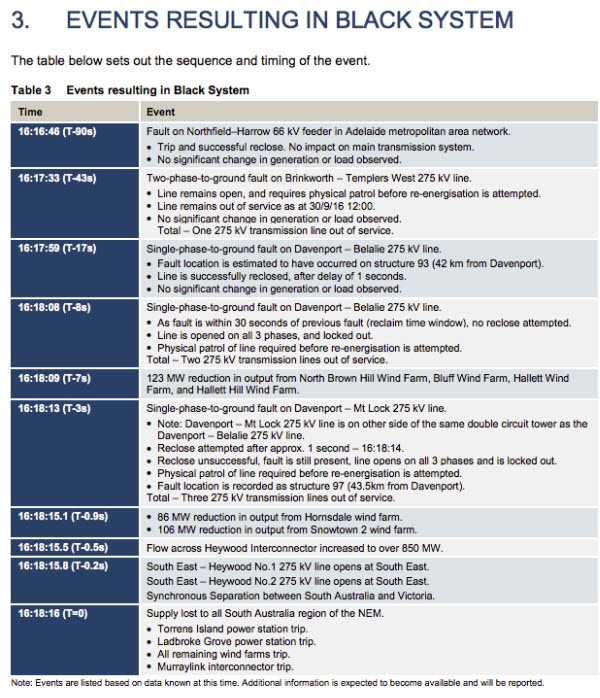 The AEMO report raises questions about the response to restore power.

These services are meant to restart the electricity system when it goes down, but there were problems with both of the providers after the blackout.

One, the report said, was not able to provide “black start capability” due to storm damage to its auxiliary diesel units — and that service is still out of action. However, it says the “transmission configuration” at the time meant this service would have had no impact.

The other was unable to provide sufficient capacity to restart any of the Torrens Island power station units “due to an issue currently under investigation”.

McConnell said these issues appeared to be disconnected from renewable energy.

Poking at the renewables mix in this event is political opportunism. Regardless of the reports conclusions, which suggest that the energy mix could be considered a factor because wind energy was cut off at 6 farms, this was entirely predictable. This storm was noted as coming days beforehand on all the surf websites, which I spend some time on. It wasn’t a surprise storm, the ‘clocking off’ of wind farm energy should have been predictable if they can’t operate in near cyclone strength winds. Back-up local generation should have been ready to go.

The storm was predicted many days in advance, the transmission towers loss was not. Their preparations for a significant storm event are a better use of resources in terms of energy generation. Blaming renewables is kindergarten level analysis.

Is it difficult to construct a transmission system that upon loss of interconnectors, automatically separates into local grids around generators?
Thus when interconnectors are lost, at least the communities around SA generators would continue to be supplied.
That would seem to be a simple design feature.

Generally protection systems prevent islanding because there is loss of central control and a danger that local generation will continue feeding the fault after relays have cleared it. However, where there is no danger to others, islanding is permitted eg most hospitals will operate in this condition if their external supply is knocked out, and you can arrange for your own property to also operate this way off local supplies.

Why is central control required? If we look back before state transmission systems, local systems were all that existed. Surely it is just a matter of having a suitable systems operator available at each large power source to manage the distribution system. Then as the transmission system comes back up, it is a matter of synchronizing the power supplies with the grid. Surely not too difficult and not too expensive.

Indeed! But in Oz we depopulate everything to cut costs with no acceptance of consequences.

The question I have reading this is why did the wind farms stop generating? With there being not enough juice statewide at the time, load balancing seems unlikely. Possibly there was too much power in the local lines not being carried away by the lost transmission lines, but I wouldn’t bet on it. Did the scenario of ‘too much wind’ the politicians talked about actually happen? A more complete report must find out why each part of the cascading failures happened.

A disaster like this should be an opportunity to learn, make big changes and ensure it never happens again. A culture war about climate change is very unhelpful.

As Dog’s commented, it was well known the storms were coming, hence it would have been concluded that it was highly likely that wind farms would trip on overspeed (to protect the turbines from physical damage). The problem was that when this happened there was no alternative because the remaining feeders had reached capacity. The renewables knockers say SA should maintain thermal plant as reserve for such eventualities, but the key quesion is then: who should pay for this added security? Who needs it? If there was embedded storage in the distribution network, then clearly those customers could not only store their excess generation but be protected against transmission outages. So why did Australia spend $10’s of billions over the past years on transmission level security instead? It would seem it was because our politicians were committed to maintaining a large centralised coal fired power station model rather than transition to a distributed generation with local storage model.