VW knows how to do crisis management ... Albo out of the closet ... Beazley puts full faith in the navy ...

No such thing as bad publicity, VW? If you want to learn about brand management in a crisis, who you gonna call? Volkswagen! (Sing it, we swear it works.) Networx Marketers Meetings are holding a “Crisis and Reputation Management” breakfast on October 24, and one of the main speakers is Kurt McGuiness, public relations manager for Volkswagen Australia. The write-up says:

“There’s no such thing as bad publicity … or is there?

“Meet two experienced communicators who know all about brand reputation management, and how to think on your feet, fast!

“From crisis management to tackling those negative conversations online, we discuss strategies for safeguarding a brand’s image, and advice on what to do when the conversation turns sour.”

Are Volkswagen really in a position to be lecturing on this? During last year’s Volkswagen diesel scandal — in which the car company was revealed to have put devices in its engines that adjusted their fuel usage when tested for emissions output, artificially improving the figures — the company took days to admit the subterfuge, instead blaming  “the unlawful behaviour of engineers and technicians involved in engine development”. After that, CEO Martin Winterkorn opted to issue a video apology, taped within Volkswagen, instead of answering reporters’ questions. It didn’t work; he resigned a short time later. Public relations experts were scathing of Volkswagen’s handling of the crisis, saying that the slow trickle of information and even slower accepting of responsibility just kept the whole thing on the front pages. Still, Ms Tips guesses that does give Volkswagen one type of expertise: a textbook example of what not to do.

Don’t touch that dial. Listeners to Ray Hadley’s 2GB program would be confused when they heard him mention the ABC in a positive light recently. But regulars shouldn’t worry, he hasn’t really changed his tune. Says a tipster:

“2GB listeners may have been surprised this morning to hear culture warrior Ray Hadley spruiking the wares of his long-time enemy, the ABC.

“As part of his regular advertisement for Sanity Records (apparently still a thing), he also mentioned that they now house a dedicated ABC section — where people can go and browse a ‘fantastic range of ABC books, documentaries etc’.

“Presumably as long as they avoid ‘Making a Killing’.”

Put down that phone, talkback callers, Hadley is just making sure you know where to find the latest season of Midsomer Murders.

Weak as piss, umpire. The Melbourne Cup might be the race that stops the nation, but the AFL grand final is the game that holds our bladders. Melbourne Water released this graph on its Facebook page, showing that Melbourne’s water use decreased significantly while Saturday’s match was on, with peaks at the three breaks during the game: 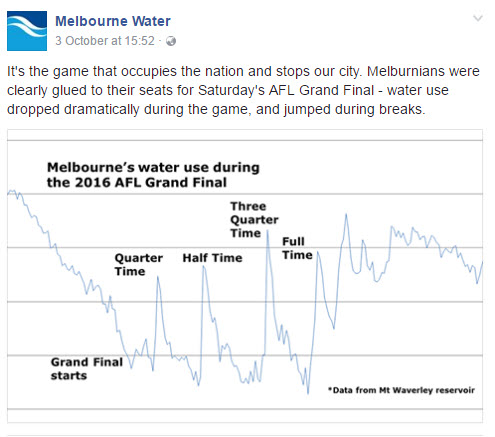 Trust the navy. At last night’s Di Gribble argument, ex-Labor MP Anna Burke gave a few revealing insights into the inner workings of the ALP when it comes to debating how Australia treats asylum seekers. Lead speaker Shen Narayanasamy spoke on the topic “The Great Immigration Con”, and Burke was the only former MP on the panel of combatants in the argument. Burke said that in 2001, as the Tampa crisis was at its peak, she went to then Labor opposition leader Kim Beazley’s office to ask why he wasn’t prosecuting the case properly against then PM John Howard and he told her “the navy wouldn’t lie to us”. History shows that there were lies in that case, just where they weren’t expected.

Flying Heap of Crap Watch. For once we have good news about the F-35: we do not have a new problem to report. Rather, it’s the return of an old problem. Long-term fans of the world’s most expensive cigarette lighter will recall the entire fleet was grounded in 2014 when the engines started catching fire, presumably a drawback for most types of aircraft. Popular Mechanics  reports that one of the planes has suffered another engine fire. Admittedly, this one had an unusual cause that is probably never likely to happen again — there was wind. “The working theory is that a fire was started after strong tailwinds redirected heat from the fighter’s engine during startup procedures,” PM reported, citing Aviation Week. As PM drily noted, the F-35, which is supposed to include a Marine variant that will be used on aircraft carriers, which probably needs to be able to operate in windy conditions. Perhaps the Marines can ask that wars only ever take place in calm conditions.

Albo is out of the closet. With all the terrible things going on in the world, it’s sometimes tempting to think we’re actually going backwards. It’s not so, says Labor left stalwart Anthony Albanese. When he entered politics in 1996, marriage equality certainly wasn’t on the table — and sexuality was barely even discussed in public. When he first raised the issue of gay rights in Labor caucus, Albo told a Wheeler Centre audience last night, it prompted a few members to shift awkwardly in their seats. In fact, such a strange idea was it to some that more than one MP whispered: “I never knew Albo was gay”.

William Hill copies Huw Parkinson. While viewers of Insiders have come to love the videos of Huw Parkinson, where our politicians are slotted into famous movies, the social media folk at William Hill have tried their hand at the same technique (and the results are not a patch on Parkinson): 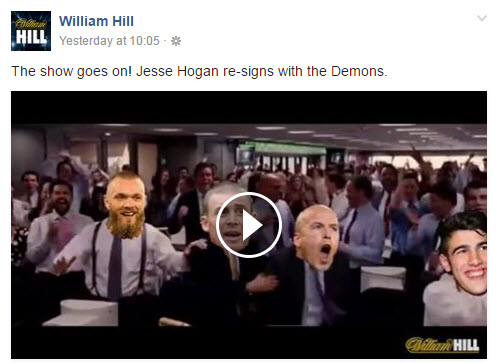 No such thing as bad publicity, VW?

Why we do need an inland rail network

My favourite quote from Bumbler Beazlebub was “I always believe what the security agencies tell me.”