Job losses to come at Bauer? ... Clive Palmer jumps on the Bulldogs bandwagon ... The Age stuffs up Bulldogs ad ...

Publishing executives at Bauer brace for cuts. Australia’s largest magazine empire has a new boss in Nick Chan. As the Oz‘s Jake Mitchell writes in a lengthy profile for today’s paper, the veteran magazine executive has “one of the toughest jobs in media”. Bauer, formerly ACP magazines, has been losing ad market share in the four years it’s been owned by the Bauer family. The man they first bought in to fix the problem, veteran British Bauer exec David Goodchild, was gone within the year. So they’ve turned to a local mag veteran to get the job done. He comes highly recommended — Chan’s a “fixer”, says our own illustrious leader Eric Beecher in the Oz. Of course, the notion of “fixing” a business send shivers through any mid-ranking executive’s spine.

Chan returned last month from a trip to Germany, and the business’ Australian managers expected him to make cuts soon after. They’re still nervously waiting, though everyone still expects a shake-up. Publisher positions are seen as particularly vulnerable — Bauer remains relatively top-heavy in that regard, particularly compared to Seven’s Pacific Magazines, of which Chan was CEO for nearly a decade. Bauer also publishes a lot of unprofitable magazines — it’s not expected all will survive the next period.

“In spite of the disappointment of the Grand Final loss, the Bulldogs showed incredible heart and sportsmanship until the final siren, led by skipper and VU student Easton Wood.” 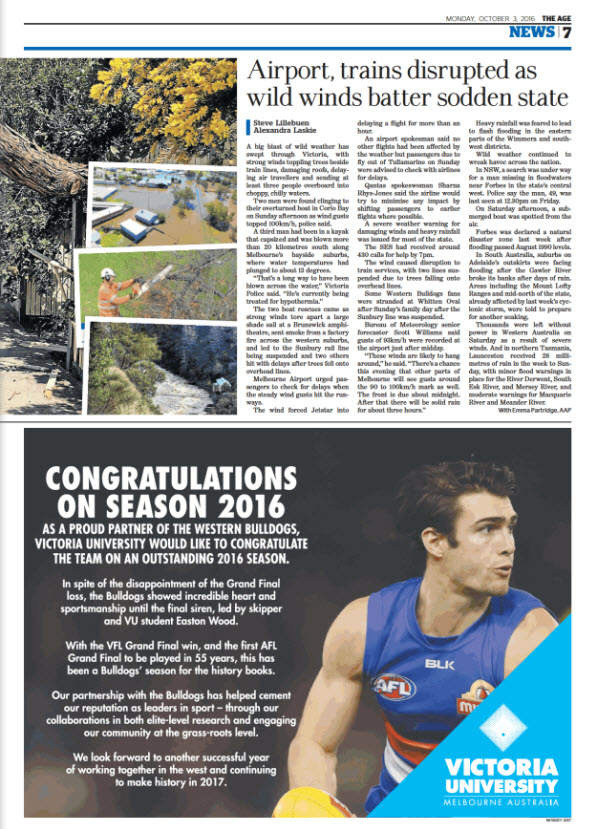 In the Herald Sun, the Victoria University advertisement correctly celebrates the Doggies’ win: 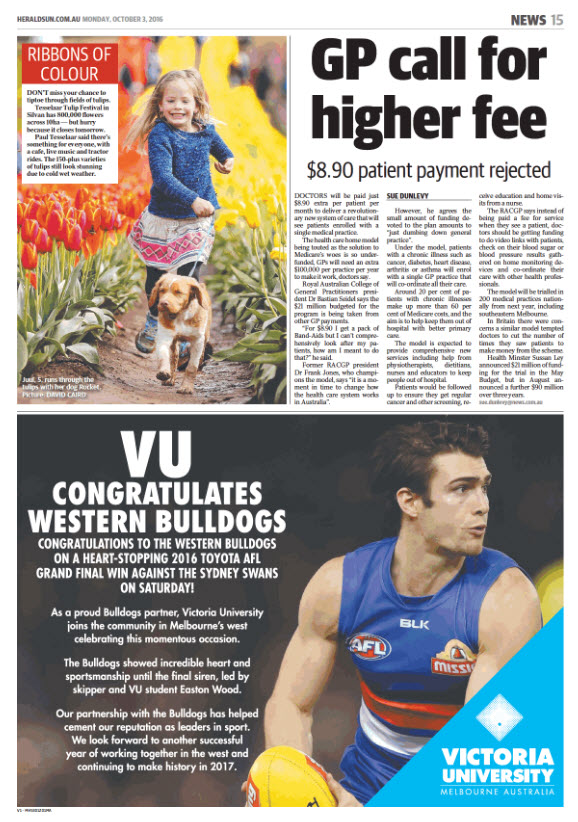 The Age has since added a correction and apology to its website, writing “This was the result of a breakdown in our ad system.”:

“It’s a stuff up, there’s no way around that and certainly apologies to Victoria University.

“Basically there were two ads that were entered into our advertising system, which is largely automated these days, and the second ad entered actually overrode the first and so it went through.”

Haven’t Doggies fans been through enough?

You’re hot then you’re cold, you’re yes then you’re no … The last week has proven that Prime Minister Malcolm Turnbull has a fraught relationship with renewable energy. In June he praised South Australia, calling the state a “leader in clean energy generation”. Last week he was less positive on them:

“There is no doubt that a heavy reliance on intermittent renewables — by which in South Australia we’re mostly talking about wind, there’s also solar but intermittent renewables — does place very different strains and pressures on a grid, than reliance on traditional base load power, whether it is fossil fuel or of course hydro, which of course as long as the water is in the dam is very reliable as well.”

A tipster tells us Turnbull hasn’t always been so negative on renewables:

“Back about 2011 I used to do a job on the road outside Mal’s house at Point Piper and I was impressed by the number of solar panels on his roof (and by the two Priuses in the drive). Now I lie awake at night wondering if he is still putting NSW’s energy security at risk.”

Pollies pick a winner. While the weekend is over (or close to over in some states), many Australians are still riding high on the weekend’s footy results from both codes. Treasurer Scott Morrison roped former prime minister John Howard and current Prime Minister Malcolm Turnbull into his cause: 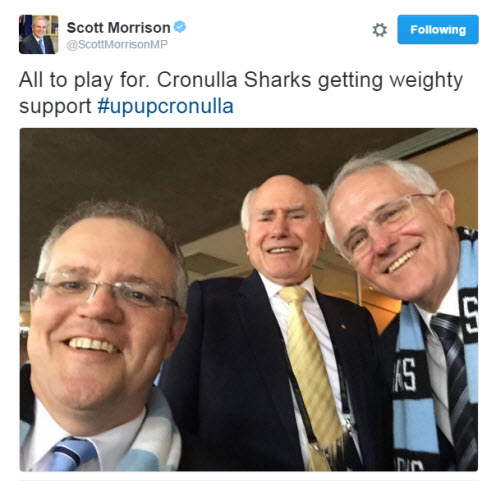 Another former PM, Julia Gillard, tweeted her happiness from overseas:

While Greens Senator Janet Rice was in amongst the red, white and blue at the MCG on Saturday: 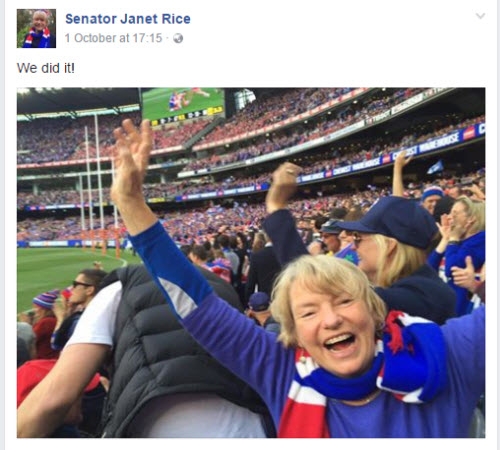 And former MP Clive Palmer referenced his connection to the Bulldogs as well:

The Prime Minister’s propensity to position himself on shifting ground is making himself a joke. Just ask South Australians.