The radicalisation of Wyatt Roy

The 26 year old former MP for Longman Wyatt Roy was under attack in Iraq and has been criticised by Malcolm Turnbull and Julie Bishop.

A 26-year-old Queensland man has lost his job, grown a beard, and turned up in Iraq, where he says he was visiting a friend. Wyatt Roy, former Liberal member for the seat of Longman, says he travelled to Iraq to see the conflict with Islamic State for himself, but Foreign Affairs Minister Julie Bishop and Prime Minister Malcolm Turnbull have slammed the young former MP. Shadow assistant treasurer Andrew Leigh tweeted this excerpt from Hansard, as last year Roy spoke in favour of the government’s changes to national security laws to make it illegal to travel to “declared areas”, including areas or Syria and Iraq. At the time Roy said:

“The coalition government will do what it can to stop people from leaving to fight with the Daesh death cult. If you do leave, we will stop you from coming back in. If you manage to come back, we will do everything humanly possible to put you in jail. Our message to people who leave Australia to fight for terrorist armies in the Middle East is a simple one: we do not want you back.

“The first duty of government is to keep our country safe, and the last thing any of us want to see is terrorists in our community. If you go and fight with a terrorist organisation against Australian forces and you are a dual national, we will strip you of your citizenship because you have made a decision to no longer uphold the privileges that come with being an Australian citizen. We are simply stamping your removal of that citizenship.” 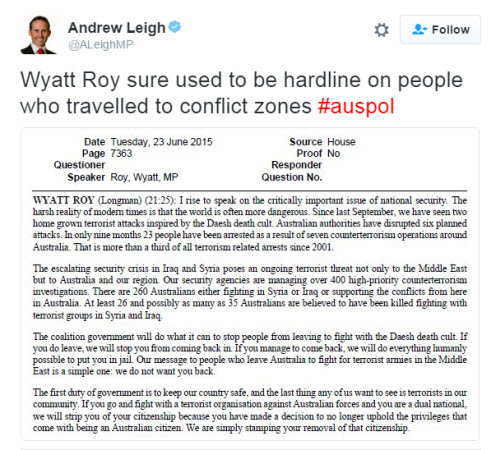 The government’s guide to figuring out whether someone you know who might have become radicalised lists the following behaviours as signs for early intervention: 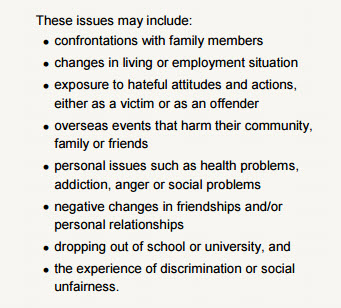 Sound familiar to you?

Everyone is at church, but where’s Judas?

If he wasn’t ‘one of us’, he would go straight to gaol.

What has happened to Crikey? Didn’t it used to be a news website? What is this drivel?

He was part of the government who wrote and rammed through the laws, he was in a prohibited zone yet we jail people here for the thought of leaving to go to the zone.

If his name was Wyazim Roydulla he would be locked up already.

The poor fellow is suffering from attention deficit …