Thanks for nothing from new MP?

A card featuring a number of insulting messages to former MP for Herbert Ewen Jones has been tweeted and it appears to include the signature of new MP Cathy O'Toole.

New Labor MP for the seat of Herbert Cathy O’Toole has put her signature to a card addressed to former MP Ewen Jones, which appears to be a thank-you card in which someone has written “… for nothing”. The card, tweeted by former president of the youth branch of the Queensland Liberal National Party Ben Riley, features a number of signatures and messages including “thanks for fuck all”. What appears to be O’Toole’s signature is on the bottom right of the card, but it is not attached to any particular message. There are at least two other signatories to the card with O’Toole as a surname. The messages, which Riley tweeted with the hashtag “poorwinners”, include “good riddance”, “Enjoy your retirement, you won’t be missed!”, “Don’t let the door smack you in the butt on the way out” and “Let’s see how you like it when you loose (sic) your job!! Which I hope is very soon.” It is unclear whether O’Toole signed the card before the messages were written. 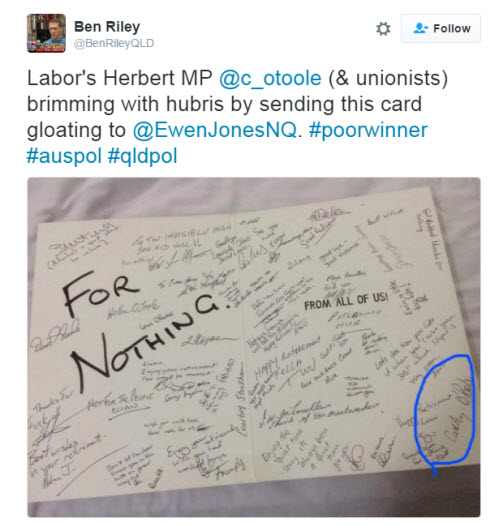 O’Toole won the Queensland seat in the July 2 election by just 37 votes, after the first count had Jones ahead by eight votes. Jones replied to Riley’s tweet, saying “First time I have seen that one. Got a lot worse in the office. It was a very bitter and dirty campaign by Unions. Such is life.” Crikey has contacted O’Toole’s office to ask about the card, but we have not heard back.