It's AFL and NRL grand final weekend, so which politicians are supporting which teams? And who will be at the games?

As we approach the final weekend of both of Australia’s major football codes for the year, it’s important to recap just where our pollies sit when it comes to the clashes between the Western Bulldogs and the Sydney Swans in the AFL, and the Cronulla Sharks and the Melbourne Storm in the NRL. There are a few passionate supporters decked out in their teams’ colours, and a few others who appear to be jumping on the bandwagon at just the right moment. Treasurer Scott Morrison is well-known for his love of the Shire and the Cronulla Sharks, wearing the black, white and sky blue as much as possible this week: 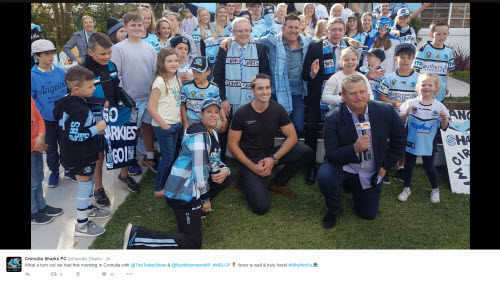 His boss Malcolm Turnbull also says he will be cheering on the Sharks on Sunday, as well as Sydney in the AFL grand final. Victorian Opposition Leader Bill Shorten is also sticking with local teams, saying that he will be supporting the Western Bulldogs and the Melbourne Storm. Shorten’s electorate of Maribyrnong is in Melbourne’s west, and his family includes a few Doggies supporters: 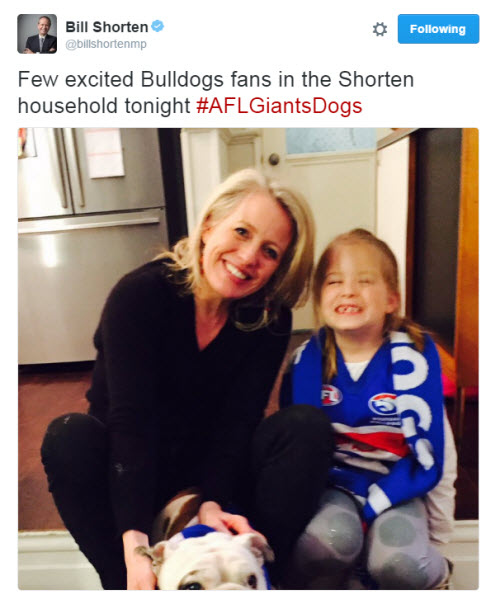 While member for Gellibrand Tim Watts seems to have been eating, sleeping and breathing red, white and blue this week, the Bulldogs’ most famous political fan, former prime minister Julia Gillard, won’t be in Australia for the game. Ms Tips can’t go past an underdog (or is it an undershark?) and will be supporting the Western Bulldogs and the Cronulla Sharks this weekend.