Indigenous Affairs Minister Nigel Scullion was given five briefings and held one meeting referencing the Don Dale tear gas incident in the months leading up to the Four Corners report, Crikey can reveal.

In July, Four Corners aired disturbing footage of the use of tear gas on six boys held in the Behavioural Management Unit of the Don Dale Youth Detention centre outside of Darwin in August 2014, as well as the use of so-called spit hood head coverings and mechanical restraint chairs.

The episode swiftly prompted Prime Minister Malcolm Turnbull to announce a royal commission into youth detention, due to report back in March next year. Scullion said at the time he was shocked to the core, despite many of the incidents in the episode being detailed in the news and in reports before the episode aired. Scullion said in response to the ABC story:

“I wish I knew what I know today yesterday afternoon or some time ago, but the facts of the matter were I didn’t know, I had never seen the vision, it hadn’t come to my attention, hadn’t piqued my interest, well, sufficiently.”

Later, after Crikey filed a freedom of information request on Scullion’s briefings, the minister admitted he had been briefed in October last year, when the NT Children’s Commissioner’s report was released.

“Well, it was for a question time brief. We’d seen it in the paper and I said ‘Listen, what can you tell me about this, this might come up’,” Scullion said.

Crikey can reveal, however, that over the course of several months, Scullion had been briefed on the matter four times to prepare him for possible questions in Parliament. Documents obtained under freedom of information reveal that the department prepared four question time briefings for Scullion to use should the matter be brought up: 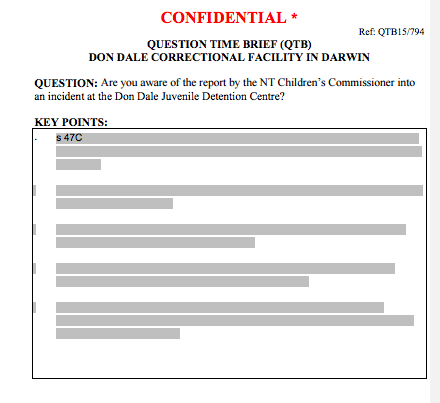 The briefs note the NT Children’s Commissioner’s report “looked at the use of tear gas during a three hour siege by inmates in August 2014” and the approval to transfer five young people into the adult prison even though one of them was only 14 and this was in breach of the Youth Justice Act.

Included in the first and second briefing is an ABC article from the time, as well as two NT government media releases on the report. The third and fourth briefs include a Land Rights article referring to the incident in a broader story about indigenous incarceration rates, and they mention of the report in the background notes for the briefing.

The document reveals that in a brief prepared before a meeting with the Northern Australian Aboriginal Justice Agency in February last year, before the NT Children’s Commissioner Report, Scullion, along with the parliamentary secretary to the prime minister Alan Tudge, were told that the agency wanted the federal government to pressure the NT government to build a new detention centre and remove children from Don Dale. Included was a description of the incident:

“The previous Don Dale Juvenile Detention Centre was shut after a riot in August 2014, where staff used tear gas on six teenagers.”

The ministers were briefed that the agency did not think it was appropriate that the teenagers had been transferred to a maximum-security adult prison.

Four of the teenagers are now suing the NT government over their alleged mistreatment at the detention centre during the August 2014 incident.

A spokesperson for Scullion said in a statement that while the FOI request did uncover previous briefings, “none of these documents referenced the graphic footage broadcast by the ABC Four Corners program.”

“These documents reveal that despite being briefed several times over several months, the minister was completely indifferent to what was going on,” he said.

“He knew about it. He just didn’t care enough to act. It’s not good enough. He shouldn’t be in the job.”

What good is a custody notification service if you don’t notify anyone about it?

We have been told that at least some of the footage had been shown publicly before. so that is not a credible defence.