Rupert Murdoch was a "person of interest" to Scientology and therefore a target for spying.

ABC Europe correspondent Steve Cannane’s book on Scientology, Fair Game, is out in a few days — Ms Tips found it chilling and very sad, but brilliantly reported. Rupert Murdoch makes several appearances. In 2012, Murdoch made his views on Scientology known: 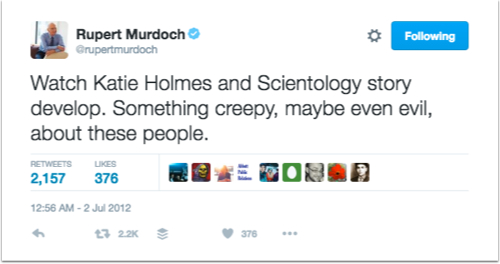 But Cannane covers many details about the mogul’s long relationship with the group. It was the Truth newspaper that first began critical coverage of Scientology, paving the way for the organisation to be banned in three Australian states (the bans were overridden by attorney-general Lionel Murphy under the Whitlam government). From the point on, Murdoch became a person of interest to Scientology’s upper hierarchy, an interest that culminated in Murdoch being spied on by the organisation through a private detective.

In the late 1960s, the Guardian Office (which protects Scientology from attack) hired Rex Beaver, a private investigator, to spy on “persons of interest”, including Rupert Murdoch. Beaver spoke to Cannane for the book and told him he figured he could boost his income by acting as a double agent for the people Scientology asked him to spy on, which included a Liberal MP, the editor of The Daily Mirror, and Murdoch himself.

“Rupert was rapt,” Beaver told Cannane. “He even volunteered to have a photograph taken of himself emerging from a motel with his secretary!”

Beaver spent several months quietly gathering intelligence before going public in the Sunday Mirror. That led to another round of condemnation of Scientology in the Australian Parliament — needless to say the intelligence operation, intended to intimidate Scientology’s critics, spectacularly backfired.

Later in the book, Cannane reports on a plot to use James Packer, a one-time Scientologist, to recruit his friend Lachlan Murdoch, which would have been seen as quite a coup for the organisation. The plan doesn’t appear to have had much success — Packer himself drifted away from the group after a few years.

‘I hate journalists’ … are we done with Barnaby yet? … doctors sue ABC journo over Scientology book …

‘No aliens living inside us’: Scientology educates the media