The register of Senators' interests reveals a lot about our politicians.

As we get to know our new senators, we also get an insight into their lives from their declarations of pecuniary interests. While most declarations involve a residential property, a mortgage, and maybe some free footy tickets, new Labor Senator for the Northern Territory Malarndirri McCarthy quietly became the first politician to register her ownership of traditional lands:

New Senator Derryn Hinch declared a gift of the non-alcoholic wine, which is now stocked in Parliament House: 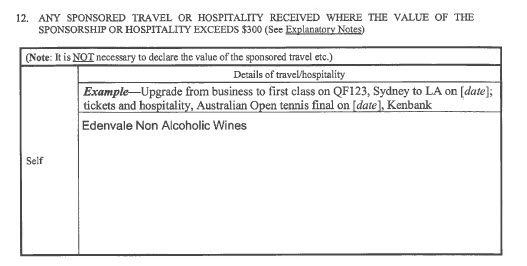 One Nation Senator Malcolm Roberts declared that he owns more than $7500 in gold and silver bullion, but he has been less than forthcoming about why he owns the precious metals. Roberts’ spokesperson told journos that he wouldn’t tell them why he loved gold so much, because he wasn’t a financial adviser:

“As per the Financial Services Reform Act 2001, Senator Roberts may not give financial advice ­unless licensed. As such he is not at liberty to discuss why he holds one asset class over another, only that he has met his obligations in making such declarations.”

Roberts also owns a boat and a trailer, which seems like a worthy investment. Conservative Senator Cory Bernardi declared that he traveled to the Olympics with Gina Rinehart in a charter aircraft:

Paterson and his phone