The Advertiser was printed in Melbourne and driven overnight to South Australia.

When the entire state of South Australia lost power yesterday afternoon, Adelaide’s Advertiser newspaper had a problem. How to physically print the newspaper and get it to its readers with no power at the printing plant (or the newsroom)? The ‘Tiser decided not even an act of God would stop it from printing the news. Says the paper:

“This weather event prevented printing of the Thursday edition of The Advertiser at the Adelaide Print Centre.

“As a result, we made the unprecedented decision to print as many newspapers as possible in the News Corp Melbourne print plant and truck to Adelaide overnight.”

But what should lead the front page? The once-in-50-year storm and accompanying blackout was obviously the issue that affected the most South Australians. But yesterday the Supreme Court found Cy Walsh not guilty of murdering his father, beloved Crows coach Phil Walsh, for reasons of insanity. On any other day, that story would have dominated the front page.

This is what the ‘Tiser, for once printed in Melbourne, came up with: 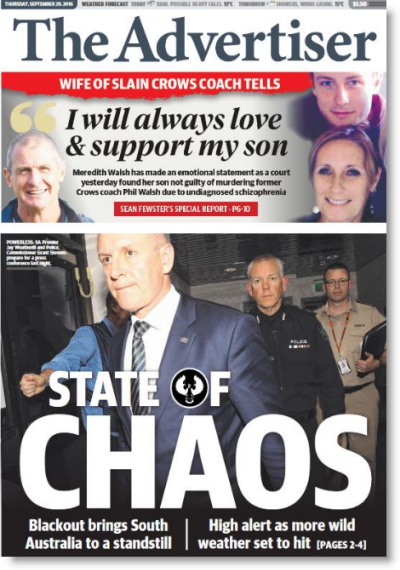