The Australian sells its front page

The Royal Australian College of General Practitioners has bought the first four pages of The Australian.

New South Wales readers of The Australian might have been wondering this morning where the news was, with the national broadsheet selling the entirety of its first four pages to the Royal Australian College of General Practitioners. The RACGP is holding its annual conference in Perth starting today, but we’re not sure what the ads are meant to convey. The last page is a sledge at the government’s freezing of the Medicare rebate, but the second two are just announcing the conference and spruiking the organisation’s ubiquity. We’re not sure the cost of such an ad buy, but we’re sure the RACGP is out quite a pretty penny. 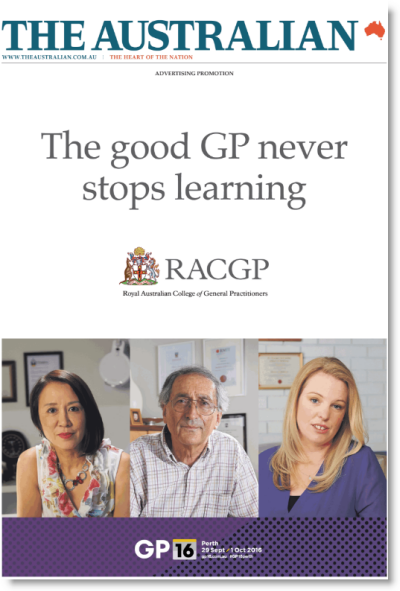 Get Fact: do men make much more than women for the same job?

Talking to my GP – the RACGP is never out of money it is a QANGO
It is a monopoly for collecting the tally of points so that every GP in Australia – member or not must pay the RACGP over $700/year just to record the number of ‘continuing education’ points so that they can be kept on the Medicare Benefits list to access the payment of benefits for services to their patients. If the GP does not pay the RACGP then Benefits under the Medical Schedule cannot be accessed.

There are many comment threads on http://www.medicalobserver.com.au/ and http://www.australiandoctor.com.au/ that turn into complaints about RACGP.
(have a login as am allied health)