From the Crikeygrapevine, the latest tips and rumours …

Dr John Howard. On Friday former prime minister John Howard will be honoured with an honorary doctorate by the University of Sydney for his work as prime minister, but some staff are trying to stage a protest outside the ceremony. The university’s chancellor, Belinda Hutchinson, has told The Australian that Howard is being honoured for his “world-leading gun law reforms and leadership in East Timor, as well as his engagement on behalf of Australia with Indonesia and China and contribution to economic reform”. Those opposed to the honour say in a letter it would be an insult to “Indigenous people, refugees, and anyone committed to multiculturalism, peace and social progress in this country and in the world”.

Ms Tips understands the letter is circulating around Sydney Uni, with senior staff as signatories. Former prime minister Bob Hawke will also be conferred the honour later this year, but it is unclear if he will face any protests.

In an Australian National Audit Office report on the management of contracts in Parliament House released on Tuesday, a survey of the catering on offer (but curiously excluding Aussie’s Cafe) taken in April found that the Trough, a place of much complaint within the halls of power, was the least favourite place, for people who work there, to eat at. The Trough recorded a net satisfaction rate of 39.5%, compared to 45.5% for the public area Queen’s Terrace Cafe, 70.3% for the coffee cart and 57.9% for catering.

In January, the Department of Parliamentary Services received a report on its options for reinvigorating the food options in Parliament that recommended continuing with an outsourcing model where the food service is provided on contract. DPS disagreed with the report, and now DPS is moving to an in-house model for the supply of food in Parliament from January next year. The ANAO noted that there had been no business case developed for moving services in-house.

In July, the Trough announced it was listening to feedback from customers and bringing back the $9 roast. The Trough is where former MP Clive Palmer was heard speaking with former senator Dio Wang, saying that Senator Jacqui Lambie, then a member of the Palmer United Party, was “not very bright”. There’s no word on whether the venues were rated by the quality of gossip that could be garnered while also grabbing a feed.

ABC staff face two votes. In the protracted battle over the ABC’s new enterprise bargaining agreement, both sides are bringing out the big guns.

Yesterday, ABC staff had a scheduled vote on the new EBA announced by HR, after the ABC’s executive decided the thing should just be put to a vote. “After 26 weeks of negotiations, it is obvious we are at an impasse with the unions. Given the three offers and the concessions already made, we feel it is the right thing to do to go directly to a vote,” wrote “director of ABC people” Rebekah Donaldson to all staff. Neither the Media, Entertainment and Arts Alliance nor the Community and Public Sector Union (the two unions that represent ABC staff) are, so far, urging a yes vote on the EBA — in fact, both unions are urging members to vote yes to a “protected action” (that could be go-slow, a strike, or other industrial action).

“Union members at the ABC fought off a substantial list of reductions to conditions during this campaign, and from early July members were readying to take protected action for the first time in 10 years as a consequence of this,” said MEAA director of media Katelin McInerney. “As a result of that action all bar two reductions to conditions were pulled by the ABC. [However] there were two outstanding issues — the introduction of a forced Christmas shutdown with one month’s notice and forced changes to roster cycles that prevented the unions from recommending these offers to members.”

The ABC has thrown the proposal back to its staff — if 50% back management’s proposed EBA, it’ll pass. If most staff vote for the union’s protected action instead, the issue could yet drag on.

The joys of a flexible workplace. In this agile and innovative age, working remotely is a luxury offered more and more to the average workers, and even some of the more popular columnists. We hear that columnist for The Australian Judith Sloan has a rarity in this age of open-plan offices and hot-desking: her very own office. But, according to a tipster, she has never really used it, and the boxes in her office remain packed up. Similarly, when we tried to get a hold of fellow News columnist Miranda Devine at The Daily Telegraph yesterday, we were told she only comes into the office about once a month. We assume that is to stay true to her roots and not be seen in the latte-sipping capital of Surry Hills.

Clinton challenged to a high-speed car chase. Crikey Northern Myth blogger Bob Gosford was a bit confused by the content of the debate between Hillary Clinton and Donald Trump yesterday, as reported by closed captioning on ABC News 24 in Brisbane. Although News 24 was replaying highlights from the debate and a press conference by Barnaby Joyce, the captions should have appeared on ABC1, which was showing British game show Pointless and then The Bill. It seemed odd that Clinton and Trump were trying to solve a murder — though in this election, anything’s possible. 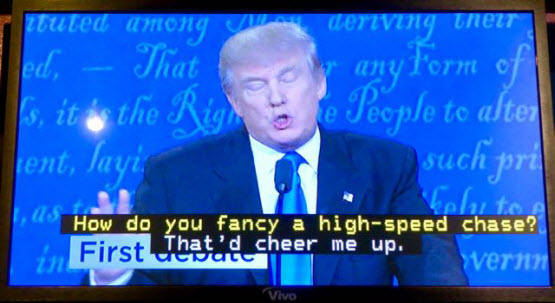 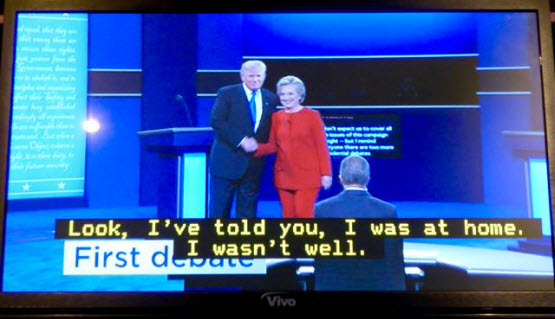 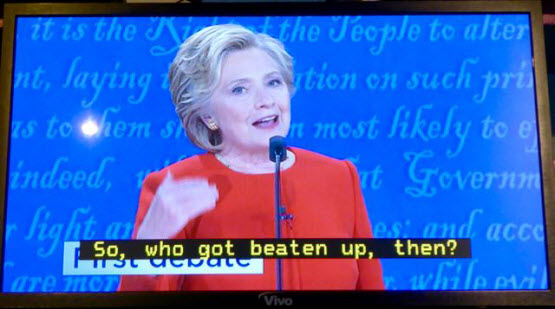 The full article is here.

Honest John Howard and and his “leadership in East Timor” – the buggery, to try to rob them blind – for Woodside?
…. That’s not Honi Soit satire?