Why you should go for the Doggies on Saturday, as written by a dyed-in-the-wool Bombers fan.

It’s pretty hard to ignore the red, white and blue fever that has swept across Melbourne this week, as the Western Bulldogs prepare for their first AFL grand final in 55 years. The Sons of the West will take on Sydney on Saturday, and you don’t need to know anything about sport to jump on this bandwagon — you don’t even have to be from Victoria. So even if you don’t know why everyone is screaming “BALL!” all the time, here are some reasons to get behind the Scraggers this week.

The Western Bulldogs, formerly known as Footscray, represent Melbourne’s diverse, working-class western suburbs, and the club is an integral part of the community there. The club works with the Immigration Department to deliver settlement services to newly arrived migrants and refugees. The club’s home ground, Whitten Oval, has played host to the annual CALDplay Football Carnival in conjunction with Footscray Adult Multicultural Education Services as part of Refugee Week, with men and women from many different cultural backgrounds competing in matches. The club also runs the Sons of the West men’s health program, with 500 men graduating from the program this year.

Their banners are the best

Players running through a banner of crepe paper is a tradition unique to Aussie rules football, and most of the time they feature tributes to players reaching significant milestones, or rhyming jibes at opposition teams. References to mascots are pretty standard. The cheer squads who volunteer to make the banners add a lot to the game, but the Western Bulldogs took it to the next level, with Melbourne comedian Danny McGinlay given the job of figuring out what to say. The results have been funny and often political, with jokes about NSW’s lockout laws and puns on beer strong points, although this one on negative gearing (against Melbourne, a team whose fans are stereotyped as being quite well off) is my favourite:

The injured captain of the Western Bulldogs is undeniably one of the most popular men in the sport, and it’s not just because of the way he plays the game. Bob Murphy, who has played for the Doggies for 16 years, went down with a knee injury in round three, and the whole football world grieved with him. While his ACL injury means that he won’t be pulling on the boots on the weekend, its players like Murphy who appeal to both the devoted and those just passing through. Writing a column for The Age for many years, Murphy spoke the language of the game. He’s also supported fellow players who suffered season-ending injuries this year.

The Bulldogs aren’t known for rolling in money — in fact they had to fight off being merged with Fitzroy in 1989, but they do have some powerful fans. Actor Chris Hemsworth posted this photo to Instagram on Saturday, making his allegiance clear:

And of course, former prime minister Julia Gillard has long been a fan of the ‘scray: 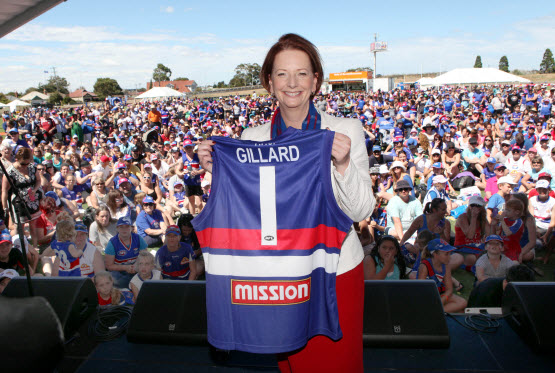 The Western Bulldogs has been one of the trailblazers when it comes to supporting women in football. Club vice president Susan Alberti has led from the front, pushing the club and the league to do better in its inclusion of women, with the Bulldogs playing a number of women’s exhibition matches over the past few years in the lead-up to the AFL Women’s League starting next year. Alberti has also put her own funds into the league, of which the Bulldogs will be one of the starting teams.

There are so many good stories to come out of the Western Bulldogs: Father-son recruits, overcoming adversity, working-class roots, the fan who has been to 972 games in a row, the pubs across Melbourne turning red, white and blue. If you love a good story, you’ll want the Bulldogs to take home the chocolates on Saturday.

As Patrick Dangerfield said on Monday night “I believe in the football gods,” and fingers crossed the gods are on the right side on Saturday.

(As soon as Saturday is over, the author will revert back to supporting Essendon and only Essendon.)

Thanks for showing us the banners.

Nothing against the Sydney Swans but I can’t shake off the memory of Geoffrey Edelsten being a former owner.

A Club with values that knows where it is; what it is; and why it is . . . . a genuine community centred product of working people/fans that commit for life. Fifty five years is a mere sniff for a true dog. I still hear the 1954 roar and anticipate nothing less post Saturday. GO DOOOOOOOOGGGGGSSSSSSSSSSSSSSSSSSSSSSSSSSSSSSSSSSSSS!

The Bulldogs were once a terrific team when they had the Mortimer brothers. Oh, and Hazem el-Masri was one amazing goal kicker.

Sorry but I think AFL is a game for sissies.

Only upwards from here for us!

Sorry Sally. You give many excellent reasons for a son of old working class Newcastle to cheer on the Dogs, but as Melbourne (ptooh!) will most likely steal the NRL championship from Sydney’s hard-luck Sharkies, we will require the consolation prize.

Nah… can’t ‘trade off’ Don’t care where you come from or who you normally support – 55 years is long enough… C’mon Dogs!

You make a good point Norm, hopefully the “football gods” are working for both the Sharks and the Dogs this weekend. I usually claim the Storm as my team, but they’ve had their success (and it wasn’t necessarily deserved), it’s Cronulla’s turn 🙂

Congratulations Sally, and well done the Dogs (I’m no footballing dogmatist). But as of Saturday evening I’m betting this season’s “football god” will be Loki the Mischievous, and woe to the Sharks.

Oh me of little faith.