The space between the boxes: how white Australia ‘remembers’ Aboriginal Australia

Every now and then, the real experiences of indigenous Australians disrupts our idea of things, but not nearly often enough, writes NT artist Therese Ritchie.

This is the show-opening speech by Therese Ritchie for her recent show of new work Blacks in the back, cunts in the front at the Outstation Gallery in Darwin in mid-August 2016.

I have had a lot of response to the title of this show, from all sides. When I first told a friend of mine that I was having a show and thinking of calling it Blacks in the back, cunts in the front, she told me a story which typifies the Territory’s many uses of the “C” word. It goes like this:

A woman was walking her dog along Casuarina Beach. They happened past another woman who was building a morning fire. The dog took a dislike to this woman and began barking at her and the woman met the dog’s hostility with her own version of a growl, telling it to “fuck off”. The dog owner took great offense and yelled something like “Don’t you dare talk to my dog like that!” The other woman answered, “Aww and you fuck off too, you white cunt,” and the dog owner responded, “Don’t you call me a white cunt … you, you black cunt.”

Apparently this exchange went back and forth quite a few times before the woman realised that her dog had moved on, and so did she.

I then asked a man who used to be a bus driver in Katherine what he thought of the idea of using it as a title for an exhibition. He told me it was common for the kids to separate themselves on the bus by calling out “blacks in the back, cunts in the front”.

And when I handed the invitation to a local Darwin woman; she waved it at me saying, “This is true! This happens.” “Yep I know,” I said. “No,” she returned, “I mean it really happens. I got on the bus the other day and joked ‘blacks in the back’ as I walked to the back of the bus and sat down”.

A speaker at a rally held in Darwin on July 30 (in response to Four Corners “Australia’s Shame“) used the term “blacks in the back” as a way of describing how Aboriginal people are perceived and placed in Australian society.

The phrase Blacks in the back, cunts in the front attracts and repels, confronts but connects, exposes and yet hides. It is a perfect description of how schizoid non-indigenous Australians can be when it comes to thinking about Aboriginal people and it describes the work in this show very well.

When it came to advertising the show, “Off the Leash” — Darwin’s entertainment guide — would not run my ad. It was too tricky for them to handle, and even though I was granted development money by the NT government — which led to the creation of most of this body of work — they decided to reserved their right to withdraw their logo from any publicity regarding the exhibition and its content. This happened a couple of days short of “Australia’s Shame”, ABC’s Four Corners report about treatment of children behind bars.

And here we have the stumper. How is it acceptable for successive NT governments to neglect the most disadvantaged people in their care whilst ignoring the consequences, culminating in grown men gassing and stripping kids or strapping them into restraint chairs and yet it’s not acceptable to say blacks in the back, cunts in the front?

Blacks in the back, cunts in the front and the response to it, is emblematic of how non-indigenous Australia embraces and yet looks away from Aboriginal people at the same time. This ruptured thinking process is the stringy bond with our earlier task of occupying, claiming and settling Australia, in particular the “wilderness consciousness” that in its day encouraged mateship, an easygoing attitude, and above all, manners (you could not swear at the dinner table or in front of your mother) whilst allowing rape and killing to be seen as pragmatic.

Today, when you apply for an arts grant there are many boxes you have to tick — and there is a “yes” or “no” box with the question, “Does your work include aboriginal people?”

It’s as if there is some unspecified space out there — an obvious line, and if you get to it, somehow Aboriginal people will not exist — at all — past present or future, and that’s where I need to go to make work that does not include them?

I don’t know where that line is?

Of course I see the reason why bureaucracy would say that question should exist, and why we should abide by it, but I refuse to engage with it.

I don’t ever see or feel that line because when I walk out my door, I see what I see. Aboriginal people are intrinsic, they are not in a box that I tick, or not.

There is a book Forgetting Aborigines by Chris Healy. Healy argues that it has been all too easy for modern non-indigenous Australians to forget Aborigines, and to forget the fact of their forgetting.

He describes this act of forgetting as pervasive and entrenched within our Anglo cultural mindset, our rituals and processes such as our ceremonies of owning and possessing through the creation of history; determining public holidays; memorials; how we educate; what we celebrate; how we incorporate indigenous art into non-indigenous cultural spaces; our bureaucratic demands and assimilationist political policies. 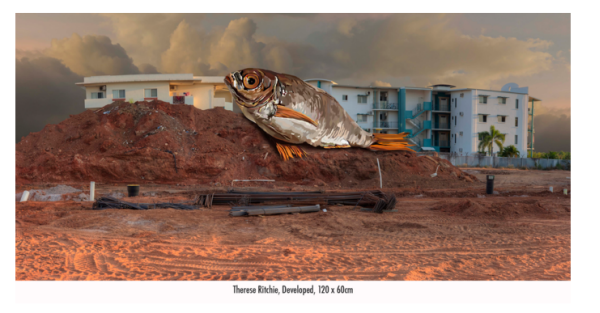 The phenomena of “forgetting” is played out in the fiscal racism of the NT government, seeing them, over decades, spend big in Darwin, where most of the white population lives, and spend less in the more remote parts of the territory, where 80% of the indigenous population lives. The 2015-16 financial year, for example, saw the NT government take $500 million dollars away from areas of indigenous disadvantage.

This amnesia, accompanied by willing deafness, is the reasoning behind the regressive Northern Territory National Emergency Response even though there had been numerous reports and recommendations on incidence of abuse and neglect, violence, suicides, incarceration rates, health and housing statistics, unemployment rates, poor educational achievement delivered to successive governments for 20 years prior to the Little Children are Sacred report.

And just as Little Children are Sacred was not new information, the treatment of children in the Don Dale Detention Centre was also not new information, as many people in the NT who have been dealing with it and trying to bring it to light for years will tell you, and yet the national outcry is one of “Why wasn’t I told?” when the question to ask is “Why don’t we care enough to remember?”

Every now and then, the real experiences of indigenous Australians disrupts our idea of things; contradicts our well-designed recall of Aboriginal people, and overwhelmed by what we see and hear, we react and bemoan, “How could this be?”

We do not question ourselves enough, our attachment to our own cultural practices as being the “norm” makes us comfortable and ignorant enough to get by, but it means we soon forget that indigenous Australians were here first and are an invaluable part of a modern Australian society.

This split of forgetting and then remembering is why Aboriginal people can have Land Rights from 1976 and yet today over 90% of NT land is under mineral exploration or petroleum license. Or why Article 14.1 of the United Nations Declaration on the Rights of Indigenous People can state: “Indigenous peoples have the right to establish and control their educational systems and institutions providing education in their own languages, in a manner appropriate to their cultural methods of teaching and learning.”

And yet the last 100 indigenous languages that live on the 500 homelands in the NT are threatened by the Stronger Futures Policy, which seeks to abolish homelands and move 10,000 people into already overcrowded communities; bilingual education has been suspended without consultation; students are punished for speaking their languages and no bilingual resources are being created.

And as residents of Darwin and the NT we know with a vengeance, that we inhabit this space all the time and that is not transient, it is very, very real. It’s uncomfortable because our sense of ourselves as “good people” is shattered when we see that it is founded upon a nagging truth that the land belongs to someone else.

How can we be truly interested in Aboriginal people’s culture when we are scheming ways to keep and take their land? And we have to face it because when we don’t face it, we hide from the past in our flurry to create an acceptable “present” and we make people — in this case — Aboriginal people disappear.
Thank you, and welcome to Blacks in the back, cunts in the front.

*Based in Darwin, Therese Ritchie is a photographer and graphic designer of 25 years standing whose work is born of all she has witnessed and experienced in the “paradise of sadness” that is the Northern Territory.

The word “Indigenous” — even worse than “Aboriginal”

Therese, Am conflicted in my response to your ‘opening speech’. Not in anyway by title or the reality of content.

Rather, because in accepting a truth and failing or avoiding response i.e. remaining silent; or in this case seeing a sum count of “0” comment 4 plus hours after Crikey arrived in my Inbox I feel complicit. i.e. “And we have to face it because when we don’t face it, we hide . . . .”

Complicit because I would not wish to post a trite or vacuous comment merely to assuage my conscience. Yet not quite knowing what of value or change possibility can be offered or supportive of your insights. We live within a small cell in the North and no “one” is removed or quarantined from your challenge.