More than two-thirds of Australians support the right to euthanasia, with only a small minority outright opposed, today's Essential Report shows.

Australians strongly support the right to medically assisted dying, despite the reluctance of major party politicians to discuss the issue, this week’s Essential Report shows, while voters put a global agreement on climate change ahead of most of the priorities put forward by both parties.

The right to euthanasia is backed by 68% of Australians, with just 13% opposing it. That’s down from 72% in 2015, but higher than in 2014. Greens voters are strongest in support and Coalition voters weakest, but nearly two-thirds of the latter still support euthanasia, and Coalition voters are more likely to say they don’t know than to outright oppose it. Support is also stronger among older voters, with 76% of people aged 45-64 backing medically assisted dying.

Prime Minister Malcolm Turnbull continues to lead Opposition Leader Bill Shorten on a wide range of character traits. For example, 75% of voters rate Turnbull as intelligent, compared to 59% who rate Shorten as intelligent. Turnbull leads Shorten by eight points on “good in a crisis” and being honest, seven points on “trustworthy” and six on “a capable leader”. Turnbull is also regarded as slightly more visionary and slightly less erratic than Shorten. However, the Opposition Leader is ahead of Turnbull in several areas — Turnbull leads him by 19 points on “out of touch”, twelve points on “arrogant” and five points on “superficial”. Neither man’s ratings have changed dramatically since May.

Shorten, however, fares better on trust to handle various issues. The Labor leader has a big lead — 21 points — on “maintaining workers’ wages and conditions”, and leads by 16 points on funding public education; he also leads by 16 on looking after the needs of pensioners and 10 points on ensuring large companies pay their fair share of tax, and making housing more affordable for first-home buyers. Turnbull performs best on “regulating the banking and finance sector”, where he leads by four points. 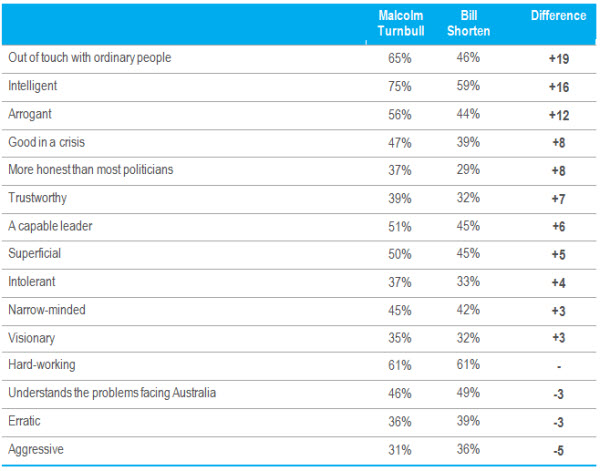 Asked to identify important issues, 75% of voters said reaching a global agreement on climate change was important, compared to 62% who nominated a banking royal commission, 59% a treaty with indigenous Australians, 36% a plebiscite on same-sex marriage and just 34% who said a referendum on becoming a republic.

On voting intention, the Coalition is up two points to 39% and Labor down a point to 36%; the Greens are down a point to 9%; NXT is down a point to 3% and One Nation remains on 6%. Based on the allocation of preferences at the July election, that leaves an unchanged two-party preferred result of 52%-48% in Labor’s favour.

The term, “first people” reeks of religion. First, God created the land, then He created the people in it. That can only be bullshit for most of us. It is also doomed to be contradicted by science, whether by archaeology, genetics or linguistics. For all of the time there have been people occupying or visiting New Guinea, there would have been visitors to Australia. It begs belief to say that they were all related to each other, and we can lay bets on what evidence will bring to light.

If there is a legal priority to be inserted in the constitution, it would surely be served by the use of the phrase, “previous peoples”.

Contradictory results from banking royal commission and Turnbull up on Shorten with ability to regulate the banking and finance sector.
I suspect that people think Turnbull is more intelligent because we are told it is so often, doesn’t mean it is so though does it?