Book too extreme for printers. Anti-gay marriage campaigner David van Gend claims that he has been censored by a printing house that has refused to print his book Stealing from a Child: the Injustice of Marriage Equality. The book was to be published by niche right-wing publisher Connor Court, but Catholic Weekly reports that McPherson’s printers wouldn’t be printing the book because of its subject matter:

“This is the first time that a publisher has refused a book on ideological grounds.

“‘This was a shock, because you don’t expect a printing firm to act as a political censor for the gay lobby,’ said Dr David, Brisbane-based GP and president of the Australian Marriage Forum.

“‘The printing company, OpusGroup, has had my book with them for two weeks — why did they wait until the day before the launch to pull the plug?’ asked Dr David.

“If the plan was to suppress the book, it has been a failure, as ‘the heavy early demand for books’ meant that thousands have already been printed digitally at a different company.”

Mine closure surprise. “Hazelwood shutdown near” read the front page of The Age on Saturday, as the paper revealed that French energy giant ENGIE looked likely to close the coal-fired power plant and mine by April next year. Although the closure of the power plant is not a new idea, and statements by recently appointed CEO of ENGIE Isabelle Kocher have made it clear that the company was looking to move away from running Hazelwood, the story seems to have caught the authorities by surprise, with Energy Minister Lily D’Ambrosio telling the media on Saturday: “I heard about the speculation last night. I contacted the senior management of the company late yesterday and their information was that they’d made no decision.” D’Ambrosio travelled to the Latrobe Valley on Saturday to talk to locals, but Ms Tips hears that it wasn’t just the state government taken by surprise. Latrobe City Council spent Saturday in crisis meetings over the news that the plant would be closed much sooner than expected. While the company and the Victorian government keep assuring locals that no decision has been made, the writing is on the wall that the plant’s days are numbered. The reactions of both the government and the council look to an outside observer as if these governing bodies didn’t have a plan in place already, which is just another worry to add to the list for the people of the Valley.

October the month to watch the RBA. October is shaping up as a big month for new Reserve Bank governor Philip Lowe. There’s his first RBA board meeting as governor, the first major report (the biannual Financial Stability Review) and his first major speech. That happens on October 18, with a speech to a dinner in Sydney at the end of a conference sponsored by Citibank. His speech will come a few hours after the release of the RBA’s second Financial Stability Review of the year, and a couple of days after the release of the minutes of Lowe’s first board meeting as governor (that’s on October 4). The Stability Review will be read with interest to see what the RBA says about bank culture after Lowe last week continued Glenn Stevens’ criticisms of the way the banks are sometimes being managed, at his first appearance before the House of Reps Economics Committee. Lowe has already given us a slightly more optimistic view of the way the economy is going (a point made earlier this month by the bank’s head of economics, assistant governor Christopher Kent).

Blue moon. The nudists and exhibitionists of Victoria have been put on notice, with the government legislating jail terms for those convicted of mooning or streaking. While mooning does not hold the same important place in the traditions of Victoria as it does in the Northern Territory, it still seems to be an affront that the practice is explicitly mentioned in the Crimes Amendment (Sexual Offences) Act passed last week: 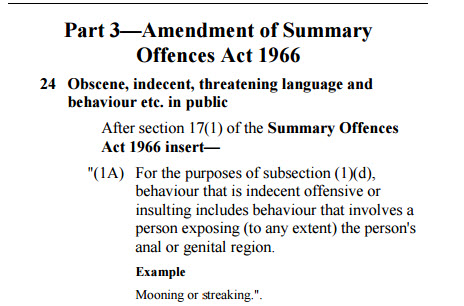 Victorian Attorney-General Martin Pakula has been quick to point out that the government isn’t actually changing anything, just specifying a difference between two different crimes. “It’s always been an offence,” he tweeted. “All we’ve done is separate ‘indecent exposure’ (e.g. mooning) from ‘sexual exposure’ (e.g. flashing).”

For first-time mooners, the maximum penalty is a two-month jail term, while repeat offenders could end up in a prison jumpsuit (hard to moon in one of those) for up to six months.

So the government can amend a law to send naughty naked runners to jail, but has to spend upwards of $200 million foe a non binding and divisive vote/plebiscite to determine whether change BACK the Marriage Act so that two people who love each other can get married? We are witnessing a regression and devolution of our political processes driven by rigid and fossilised thinkers.

Good to see that such important legislation is first & foremost on the government’s mind.