Did the Australian government pay people smugglers to turn back a boat to Indonesia in 2015?

The Department of Immigration and Border Protection has released more than 300 pages revealing how the department dealt with allegations that Australian government officials paid people smugglers to turn boats around in 2015.

Crikey filed a freedom of information request for the documents in October last year, but they were only released last week. The department spent close to a year working on the request and redacting dozens of pages on the grounds of national security and the potential threat to Operation Sovereign Borders.

Media reports around the time suggested Australian Secret Intelligence Service officers were believed to have made the payments.

When the matter was referred to a parliamentary committee, the talking points say that the department could not comment on whether people smugglers were paid on the grounds that it was before a committee, but then when it got to a committee, Immigration Minister Petter Dutton claimed public interest immunity on answering questions about whether Australia paid people smugglers on the grounds of national security, and officials refused on multiple occasions to confirm or deny whether payments had been made on the grounds of the public interest immunity claim.

The timeline of the incident prepared by the department contained three missing dot points between the boat being “safely returned to Indonesia” and the government being asked about the incident in June 2015. 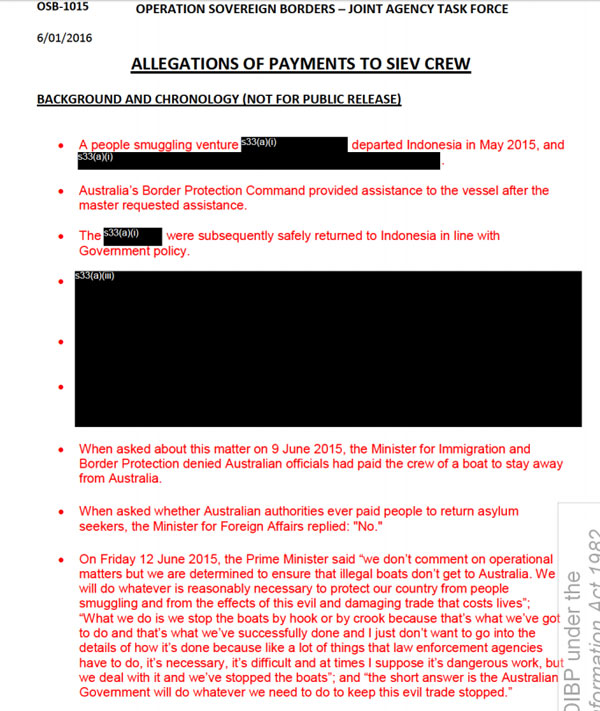 These three dot points were redacted on the grounds they could cause damage to international relations.

“I am of the view that releasing the material I have exempted under this part would contribute to a lessening of confidence these foreign governments place in the Australian government, and could affect the maintenance of good working relationships with those governments,” the department’s decision officer Alison Smith stated in her decision to Crikey.

The department war-gamed potential responses to the Senate inquiry, including potentially being asked about whether money was paid, and how the smugglers might otherwise have obtained large sums of money to show to Amnesty.

“It is not appropriate for me to speculate or speak to hypotheticals,” the draft Q&A advises officials to respond. The draft Q&A also suggests the department considered that this would lead to questions on whether the involvement of security agencies in making the payment might put them “above the law”.

“I have made no such statement, nor is it appropriate for me to comment regarding the Australian intelligence community,” was the suggested response.

The department came to the view that the details released about the incident should be as accurate as possible because “we expect both to be subject to comprehensive of examination [sic] (now and into the future) and we want to avoid any prospect of giving contradictory or potentially misleading information which will be perceived poorly,” ABF commander Abi Bradshaw said in an email.

The parliamentary inquiry lapsed at the time of the last election but in the interim report released in May, the committee said that due to the Australian government’s “unwillingness to offer any alternative narrative” to the “largely consistent versions” from Australian and Indonesian media, Amnesty International, as well as the Indonesian police and government that say payments were made, that “may appear to suggest where the truth lies”.

The full 308 pages of documents can be found here.

Lordy, imagine what could happen if we found out what we were actually paying our public service (from politicians down/up?) to do?

they told the Australian people what they are doing.

I am so sick of this lazy crap. There are no people smugglers, ergo they were not being paid by us to smuggle. They were though paid by us to traffic humans back to danger and that is the only time a crime was committed.

It astounds me that 100% of the Australian media are so lazy and ignorant they refuse to read or report the migrant smuggling protocol which absolutely excludes those who help refugees get to safety and forbids any form of criminalising refugee movements – how many more years, we signed the protocol in 2000 and ratified it through parliament in 2004.

The smuggling of migrants protocol is a protocol to protect the rights of migrants coerced or tricked, refugees want to move and are allowed to move so there is no such thing as smuggling them.

I wonder if it is possible to buy shares in the company that provides the black redacting ink?
It certainly has a big future under this government which is, rightly & properly, terrified of the citizenry finding out … stuff.