Truth bombs. In AFL news, Essendon fans, and fans of the game, are celebrating the announcement by Essendon player and former captain Jobe Watson that he is returning to play for the club this year, after serving his one-year ban due to the club’s drugs scandal. While many will hope this is the start of the end of the years of scandal and mismanagement, the audience at Melbourne’s Wheeler Centre last night got a frank insight into how things went so badly at the club in 2012 from former senior assistant coach (and premiership coach at Geelong) Mark “Bomber” Thompson. While the comments were said with a smile, and often with a laugh, Thompson revealed that governance standards at the club were almost non-existent.

Thompson also described Essendon as a “funny club”, and said that it had failed former senior coaches James Hird and Matthew Knights.

The conversation with sports journo Karen Lyons was to promote his new book, Bomber: The Whole Story.

Radio station closes due to too many listeners. What do you do if you start a new digital radio station and it gets really popular? Shut it down, of course. Well, that’s what Triple M has done to its sister station Triple M Classic Rock, because it had too many listeners. Triple M is shutting down the digital station because it is eating into the listenership of its main station, which would compromise the main FM station’s value to advertisers. The station gave this statement to radio insider website RadioInfo:

“Our big brother Triple M-FM is now playing much more classic rock than it was when Classic Rock Digital was created.

“Now, Triple M is playing the best classics, and is about to launch the ‘Classic Rock Summer’.

“We ask that you check it out. You can turn to Triple M on FM, DAB+, online at http://www.triplem.com.au, or via RadioApp for your smart phone.”

This doesn’t sound like a recipe for ratings success.

Pot of gold. Members of Melbourne’s Celtic Club, a decaying three-storey inner-city property with a long and proud history to the Irish community, have voted to sell their beloved premises to a developer for $25.6 million to turn into a 48-storey apartment complex.

The Celtic Club premises sit on the corner of Queen and La Trobe streets in Melbourne, and its members have been locked in a divisive battle over whether or not to sell the building to developers for at least three years. Members voted down the most recent proposal, in July, to sell the venue to developer Beulah International. The club requires a 75% approval rate, and 71.5% of votes were in favour.

The vote on Wednesday night passed, with 79.7% members voting in favour of the sale. The final numbers were 274 in favour, 68 against and 2 informal votes. Full story is here.

Everyone loves a winner. The annual Ernie awards were held in Sydney last night, with Mark Latham, Rolf Harris and barrister Ben Mallick “honoured” for the sexist comments they have made throughout the year. The awards are in their 24th year, where women come together and judge the most sexist remarks made throughout the year, with the winners of each category chosen by who receives the loudest boos. Barrister Ben Mallick was one of the joint winners of the Gold Ernie for saying, while defending a taxi driver charged with sexual assault, “the attack would not have happened if the woman had sat in the back seat”. The NSW Department of Education also shared in the top gong, for “proposing that experienced school teachers who take 5 years off to have children be downgraded to beginner teacher salary when they return to work”.

Crikey‘s own Bernard Keane was honoured at the awards, winning the “Good Ernie” along with Byron Shire Council, which banned sexist graffiti on Wicked Camper from caravan parks in the council area. The women of the Ernie awards celebrated this column from Keane, where he took aim at Pauline Hanson’s comments on the family court in her maiden speech:

“I can’t recall a more sickening, more evil statement from a politician than this attempt to explain away the murder of women by ex-partners as frustration due to frivolous claims by women.”

If you feel like revisiting the whole article, it’s here.

Look away now. While we don’t always try and make sense of the tweets of Lyle Shelton, director of the Australian Christian Lobby, this one has us stumped. It’s a picture of hundreds of people, at a pride march, with banners, and Shelton says “this is the picture SSM activists don’t want you to see”. 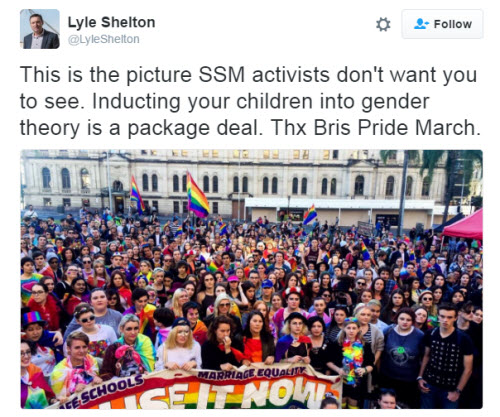 Hird doubles down on ASADA ruling

Essendon stood by Hird, but enough is enough

Obviously people who agree with Lyle Shelton, who share his worldview, will find the photo worrying. It would indicate that there are other people with a different worldview, who actually don’t look different.