Hanson demands ABC split? The jockeying and lobbying over the government’s proposed media reforms is reaching peak intensity as we speak. Many eyes have naturally turned to the votes of Pauline Hanson and her parliamentary colleagues. So here’s a tip: the Hansonites will be flexible on supporting the key planks of the government’s proposed changes — the reach rule and the two-out-of-three ownership limits (two of TV, radio or newspapers in a single market) — in return for a quid pro quo. And what might that be? Splitting the ABC into two separately run parts, metro and regional, in order to deliver more funding and commitment to the ABC in regional Australia and splitting it off from the lefties in Ultimo. That might seem far-fetched, unless of course the idea garnered support from another crucial political force like the National Party (which is already open to rather robust interventions to ensure the ABC covers the regions).

Flight fury in parli. We hear there has been a delay in MPs and staffers being reimbursed for their travel by the Department of Parliamentary Services:

“Federal politicians and their staff are becoming increasingly frustrated with the Ministerial & Parliamentary Services Branch over unpaid travel claims. Once known for reliability in processing claims, the branch’s tardiness and ‘couldn’t care less’ attitude is now the talk of parliamentary corridors. Some staff have claims outstanding from months ago. They’re supposed to be processed within a week. The ‘staff helpdesk’ is anything but — with calls going unanswered or ringing out. Submitted claims are also being regularly ‘lost’ by the agency. Senior Government members are talking about putting a broom through the organisation. The lesson being — never get in the way of a politician and a travel claim.”

Time for a revolt?

Has anyone seen Freedom Boy’s iPad? The new member for Goldstein has a rocky start to Parliament — losing his iPad “somewhere in Parliament House”. Tim Wilson’s office managers sent an email to all staffers and pollies who walk the halls of power. We hope they have an eye for tech and the iPad gets back to its original owner.

Too good to be true? Betting company Luxbet appeared to have its social media taken over by a disgruntled ex-employee this morning, with the company’s Twitter account sending this to its followers: 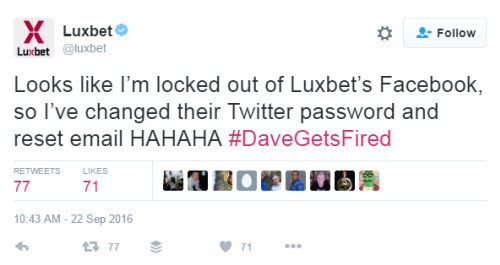 But did Dave really get fired? There have been a number of tweets since the original one, including one about changing the logo to “DaveBet” and another about using the corporate credit card for lunch (who gives their social media managers credit cards anyway?). So is it too good to be true? An elaborate ruse to make us want to place a bet with the funny lads at Luxbet? Well, probably, yes. AAP reporter Luke Costin found the LinkedIn profile for the social media manager at Tabcorp, the parent company of Luxbet, and his name is Adrian Moore, not Dave. His profile reads:

“As a Social Media Manager of Tabcorp’s social media department, my role is to help drive the development of dynamic social strategy, implement paid social campaigns and creative content solutions within a growing team of social media experts across three brands under the Tabcorp umbrella; TAB, Luxbet and Sky Racing.” 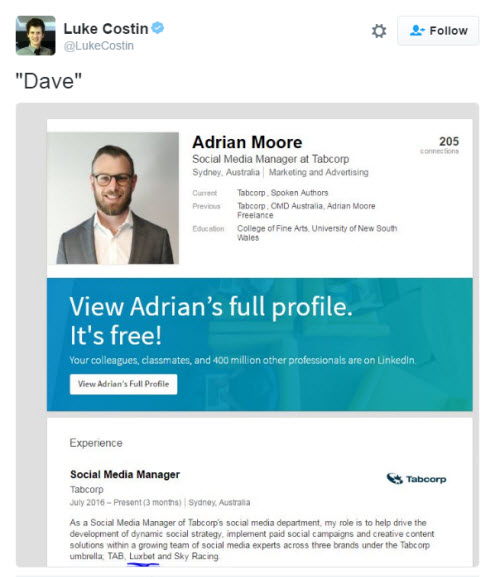 Luxbet has confirmed to Mumbrella that it’s a hoax designed to promote its new app.

“the lefties in Ultimo.” Am I ever sick and tired of hearing that phrase or variations thereto. The ABC is no more “left” than my neighbour’s cat. It faithfully parrots the establishment line on just about any issue you care to nominate. This is especially true in its coverage of foreign affairs. Syria, Ukraine and the South China Sea are just some of the more recent examples. When did you last see or hear a program questioning the American alliance?

Is this Luxbet drivel a good sign that social media will eat itself? One can but hope.

Are parliamentarians and their staff unaware of the “Find my iPad” app? Also was there any sensitive material on the device? These people are hopeless!

Definitely laughing out loud. Perhaps the constant efficiency dividends have resulted in a failure of efficiency. You cannot keep cutting while the work increases. Or maybe some the claims are taking a long time because they are fanciful?

Kampbell
Reply to  old greybearded one

Reaping what they sow…