The Daily Telegraph has admitted its front page exclusive on two dole bludgers was not true.

In its attempt to find a modern day Paxton Family of dole bludgers rorting our welfare system, The Daily Telegraph last week served us up on the front page the story of the NEETs (not in employment, education, or training). Well, two of them, anyway. Ashleigh and Amy from Mt Druitt in western Sydney who told the Tele‘s Natasha Bita that they would rather “chill at Maccas” than get a job.

“At a time when most Australians are working harder than ever for flatlining wages, our taxes are paying for people to watch TV and play computer games,” the accompanying editorial thundered. 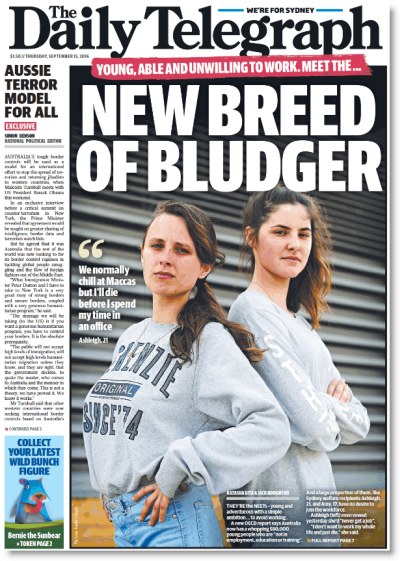 The next story the paper ran a page 8 exclusive claiming “Farce Food Job Rejection” with the two girls being offered jobs at the McDonald’s they frequent, but turning it down.

The story so infuriated 2GB shock jock Ray Hadley that he asked Treasurer Scott Morrison to investigate the matter:

“That cast a pall over the entire Western part of Sydney, because they come from Mount Druitt. Everyone said ‘oh lazy bastards they won’t work’. And yes they are lazy bastards who won’t work, but the majority of people in that area do their best to survive and work and be productive…. Well, what should have happened, Mr Porter should have been ringing Centrelink at Mr Druitt and saying — here are the two girls, they’ve identified themselves. Get them off the dole. Whatever they’re on, stop it tomorrow.”

ScoMo promised to get the government to investigate the case.

Today, on page 2, the paper reports the girl made it all up:

“I don’t know why I made it up, I thought I was being cool.” 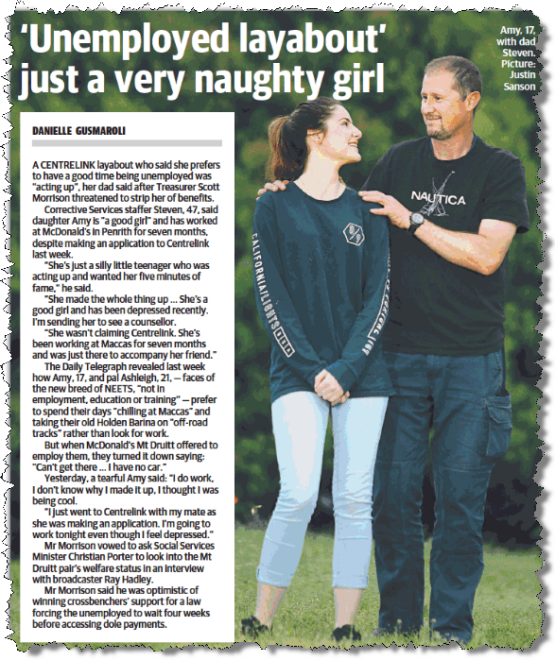 Curiously no mea culpa from the paper for not asking the parents of the girls involved before splashing them on page 1 and getting the Social Services Minister involved. The comments on the online piece so far seem to blame the family, rather than the reporting. — Josh Taylor

Headlines from 2019 the Daily Tele missed

And of course Ray Hadley just eats up his Daily Tele script without even thinking about questioning it, despite it being responsible for making him look like even more of a fool on multiple occasions.

feh, she deserves everything she gets for appropriating NEETism. bloody normies.

Was this tilling the soil in readiness for Porter’s sod-seeding, yesterday? …. “Limited News Party PR”?

Did she not do to mudorc what the kiddies calling ‘pwned’? Showed them for the hypocrites & immoral scum they are.