Baird’s religion means religion stays in schools. NSW Premier Mike Baird has admitted that his Christian faith means that he will keep special religious education classes in New South Wales schools for as long as he is premier. In late 2015, the NSW Department of Education hired consultants to undertake a review of the SRE classes, including the appropriateness of the material, and consent given by parents. The review was completed in 2015, but the state government has yet to release the report.

The department’s website states the findings and recommendations of the report are still being considered by the department, but at a recent estimates hearing when questioned by Fred Nile, NSW Education Minister Adrian Piccoli said the government “is not changing the policy around scripture classes”.

Baird appears not for turning, either. According to a video recorded by Fairness in Religions in Schools — a group of parents seeking to end SRE during school hours — at a recent event attended by Baird at Warrawee Anglican Church, 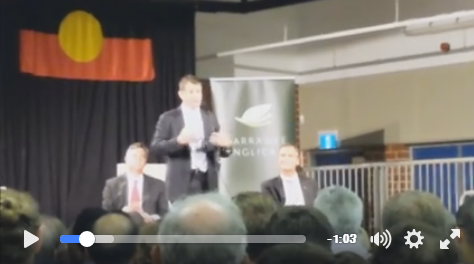 Baird told the audience that his faith meant religious instruction was here to stay:

Victoria banned SRE during school hours, and the Queensland government opted to keep SRE with a few minor changes to the course material after it was found to contain “grooming” language to seven-year-olds.

Learn how not to cure cancer, for a mere $500. Reports today show that Penguin publishers were warned about “gaps” in Belle Gibson’s story about surviving cancer by eating a healthy diet before publishing her book The Whole Pantry in 2014, even hiring a public relations company to draft a crisis plan in case Gibson was ever accused of lying. The books were pulled from shelves, but a tipster tells us they are still available for those who are truly dedicated to eating clean. The Abebooks website, which sells new, used and rare and collectible books online, has three copies of The Whole Pantry — if you’re willing to fork out US$500 for the privilege. The description says the copies are pre-release first editions, and not the final copy. The website does not mention that the claims made in the book about Gibson’s diagnosis of brain cancer and ability to heal herself through diet and lifestyle changes have been disproved. It’s a high price to pay for a recipe book, especially when those recipes won’t save you from cancer.

The best of intentions. In May Queensland Deputy Premier Jackie Trad asked the Queensland Crime and Corruption Commission to look into political donations, but she might now be ruing that decision. The Palaszczuk government was keen on the investigation to find out whether there had been a sizeable undeclared “LNP bloc” in the recent Gold Coast local government elections (candidates who fail to declare any campaign co-ordination could face two years in prison). But now the dog might be about to bite the master — we’ve heard whispers the independent CCC is after a senior Labor scalp.

“I have been advised that CCC is actively and seriously investigating and interviewing people who have come forward to report several high-profile Gold Coast-based Queensland Labor figures for being possibly connected to the recent local government election scandal and potentially engaging in corrupt conduct.

“These links are believed to reach into the highest levels of Queensland Labor and a Palaszczuk government ministerial office.”

Sky News’ new double act. Sky News has refused to deny that it is preparing to launch a new panel show co-hosted by Kristina Keneally and Peta Credlin. Tony Abbott’s former chief of staff has been one of Sky News’ biggest coups of 2016, with the ex-staffer providing insightful commentary as well as regular headlines for the broadcaster. Crikey understands that she is set to become part of a new regular program with Keneally, starting in November. Keneally, a former NSW premier and regular host on Sky, is also seen as one of the channel’s stronger performers, and the pairing is designed to bring a bit of extra spark to Sky’s many panel shows.

We asked Sky News about the program and were told by a spokesperson: “Sky News is looking at a number of new shows for 2017. Nothing has been decided yet.”

Jokes aside about the number of people who actually watch Sky, we would watch Keneally and Credlin go head to head.

Dairy prices over the ditch. Psst, all those moaners and groaners about hard times in the dairy industry — there’s another price rise coming, if the second increase in a month from the giant Kiwi dairy group Fonterra is any guide. Fonterra this morning boosted its farmgate milk price by 50 cents to NZ$5.25 per kilogram of milk solids, which means nearly an extra NZ$1 billion in revenue nationally and US$78,980 for the average New Zealand dairy farmer. It also brings the price to 20c above the break-even of NZ$5.05 calculated by industry group DairyNZ. The news came a day before Fonterra releases its latest financial results.

The news comes after a 1.7% rise in world dairy prices at the GlobalDairyTrade auction overnight Tuesday, lifting the index to an 18-month high. Prices are up 35% in the last five auctions. Fonterra has now lifted its forecast by NZ$1/kg MS, or 23%, since it retained its forecast on August 1 at NZ$4.25/kg MS.

On September 14, Murray Goulburn, which has been the focus of Victorian farmer complaints for the way it has handled its pricing and cuts to dairy farm incomes in a capricious manner, lifted its milk solids price by 15 cents a kilogram to A$4.46 (around NZ$4.60, still well below the new Kiwi price). That was below its competitors Australian prices — Fonterra at $4.75kg/ms, Bega at $5kg/ms and Warrnambool Cheese and Butter at $4.80kg/ms. Another price rise looks justified as quickly as possible, judging by the sharp rise in the global and NZ prices.

Fonterra withdraws as San Miguel emerges as a giant

And again I say unto you, Mike, It is easier for a camel to go through the eye of a needle, than for a rich man to enter into the kingdom of God.