Did Labor really save public servants? Last week, the Community and Public Sector Union (CPSU) trumpeted the Labor Party’s work on the Omnibus Savings Bill, which included a $500 million cut for the Australian Renewable Energy Agency — although you wouldn’t have noticed it if you had read the CPSU’s press release:

“The CPSU welcomes today’s announcement that the Australian Renewable Energy Agency (ARENA) will retain $800 million of funding under an agreement struck by the Coalition Government and the Federal Labor Opposition.

“The deal secures ARENA’s future and that of the renewable energy industry in Australia after the CPSU warned last month that abolishing the agency as part of the Omnibus Savings Bill would spell the end for the sector.”

The original proposal put forward by the government would have resulted in all of ARENA’s funding being cut, so the $800 million was a win, and the CPSU’s Michael Tull was quoted in the release giving the ALP the credit:

“After enduring significant attacks over the last three years, today’s decision will provide a much-needed boost to the renewables sector in Australia. The CPSU acknowledges the contribution of the Labor Party in rejecting cuts to climate science across the board.”

A tipster tells us that on Thursday evening, before the Omnibus Savings Bill would be debated into the wee hours of the morning before being passed in the Senate, this dinner date was spotted not far from Parliament House:

“Ducked out to get some Thai for dinner from Kingston and who was sitting there but Left powerbrokers Anthony Albanese, Mark Butler and the CPSU National Secretary Nadine Flood.”

Was the dinner a chance to celebrate the bill, which would still result in cuts? Or was it just a shared love for Pad Thai?

Fibre to the rose. While NBN Co is facing criticism over continued cost blowouts for its one job — connecting Australians to high-speed fibre internet — it’s still got time to work up a bit of a sweat. NBN Co announced yesterday that it was partnering with ex-Bachelor reality TV star Tim Robards to help people get fit with their Virtual Trainer program. The announcement includes some fascinating stats about Australians’ workout habits (Millennials are most inclined to turn to tech — 69% — to help them get the best results from their exercise. They are also the most likely to be intimidated working out in the gym — 67% — and are the most motivated by getting “beach-body ready” for summer –63%). 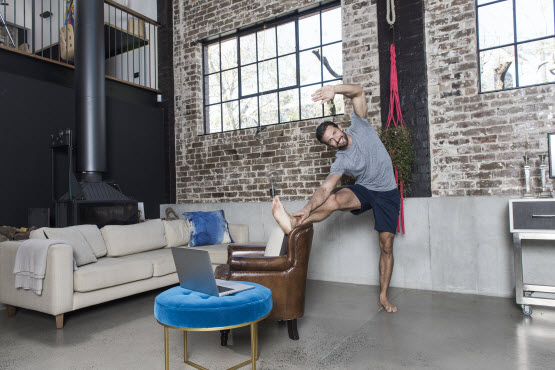 Robards, who was originally a chiropractor and now runs an online fitness business called “the Robards Method”, is featured in a number of videos promoting the program, encouraging people to work out in their lounge rooms — all you need is a high-speed internet connection! We pity those poor saps without the NBN who are likely to get stuck in an awkward pose awaiting Robards’ next instruction.

We asked NBN Co how much money was spent on this kind of PR exercise, but didn’t hear back.

Hotel confirms physical threats over ACL conference. Doubts have been raised over The Australian‘s claims that physical threats had been made to hotel staff working at the venue where a conference involving the Australian Christian Lobby was scheduled to be held. The Oz reported the threats had been made by those opposing the conference. The hotel has now confirmed the threats were real.

Last week, Mercure’s Facebook page was inundated with complaints from activists about a report from gay news website SameSame that the ACL, along with a few other Christian groups, would be meeting at the Sydney Airport venue this week to discuss same-sex marriage (what else?). Eventually, the ACL moved the event to an undisclosed location today, and The Australian reported that there had been “threats” made to the hotel. This was disputed by organiser Pauline Pantsdown, who said that the Facebook reviews had all been civil.

Given the paper’s long history of getting stories about Safe Schools and same-sex marriage wrong, readers asked us to look into it. But a spokesperson for Mercure Sydney Airport confirmed that there had been threats of physical harm made over the phone.

“The hotel received a number of unwarranted phone calls that were intimidating in nature including physical harm and threats. We have a duty of care to our hotel guests and staff to ensure their safety and security, and we exercise the right to remove an event or guest from our premises if we believe their safety is compromised, and so it was on this basis that the ACL event was cancelled,” the spokesperson said.

We understand Andrew Bolt asked Pantsdown to appear on his Sky News show yesterday, but she declined.

Census guilt trip. With the September 23 deadline for census forms approaching, a tipster tells us that collectors are getting so desperate to get responses, they are trying to guilt people into completing the forms. This census collector told a Crikey tipster that if she filled out her form it would mean $5000 more for Queensland, and that she didn’t have to fill out every question if she didn’t want to. 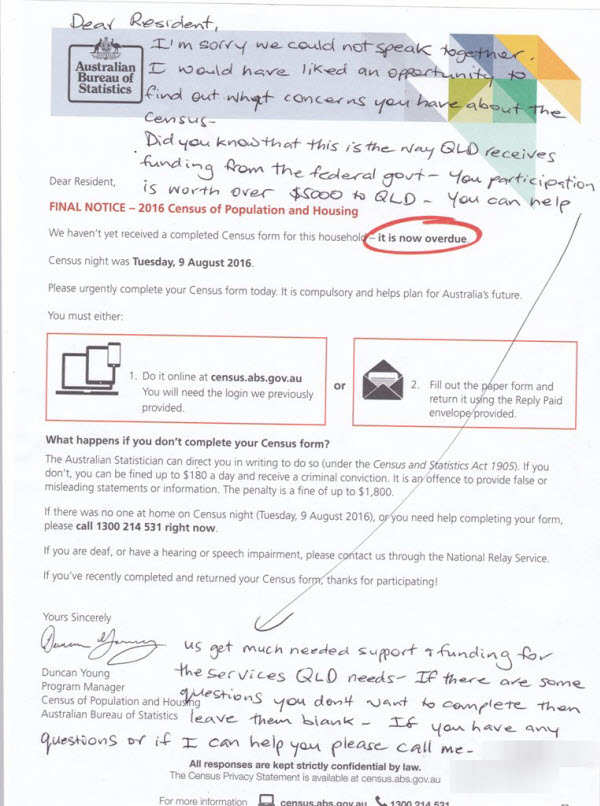 Helmet headache. It’s unlike Crikey to say anything good about the F-35 — and so we won’t. But we have found a problem with the plane that can’t fly, can’t shoot, can’t dogfight and isn’t ready for combat despite being designated as “combat-ready” that isn’t directly to do with the plane itself. Turns out, the helmet is looming as a potential weak link in the entire project. Huh? We’ve come a long way from the days of leather caps and goggles, of course, and the F-35 helmet is designed to be the last word in information-display systems for pilots, with an entire, massively complex data and camera system geared to individual pilots’ eye movements.

But according to The Economist, the helmets take two days to properly tailor to a pilot’s eye movements, and that can only be done by one company, Rockwell Collins. If you drop a helmet, you can’t borrow another pilot’s, because that’s been tuned to their eye movements, not yours. So if you wanted to cripple a country’s complement of F-35s, all you’d need to do is take a hammer to the pilots’ helmets, and they can’t fly — they’d have to troop off to Rockwell Collins to spend two days being fitted for some more headgear — which costs a mere $400,000 a pop. Same deal if the equipment-laden helmets develop a fault — unless you have a spare, you’re not in the air.

Then there’s the problem that the helmets are so large that pilots have complained of not being able to move their heads inside the cockpit. And at 2.4 kilograms, the helmets are heavy enough to severely or even fatally damage a pilot’s cervical spine if they have to eject. All things considered, it seems the Flying Heap of Crap really is not merely too expensive but too dangerous to ever send into actual combat.

ACMA’s musical chairs. The Turnbull government is becoming as slow and controlling as the Abbott administration was insofar as making key appointments — so far as broadcasting policies are concerned. The snail-like pace of reform of the reach and ownership rules is now the stuff of legend, but eyebrows are now being raised by the delays to naming the new leadership of the key media regulator, the Australian Communications and Media Authority. Longtime chairman Chris Chapman retired after 10 years in the role in February of this year. In the wake of Chapman’s retirement, ACMA deputy chairman Richard Bean was named acting chairman, while full-time authority member James Cameron became acting deputy chair, and making the positions permanent would have been very easy, especially as the two men concerned have the respect and standing in the media. But there are now just four members of the ACMA board — the two named above and two part-time members. The organisation is down two more full-time members. The 2014-15 annual report listed eight full-time and part-time members.

The job of naming a full-time chair and deputy chair falls to Communications Minister Senator Mitch Fifield. It is understood the federal government has had a report since April recommending the new chair and deputy and other positions — a decision could have easily been made well before calling the July 2 poll in May. After all, Attorney-General George Brandis made 56 appointments just before the government went into caretaker role in May. The government has had the best part of two months since the poll results were known to announce these important appointments, but it hasn’t. Rod Sims, the head of the ACCC, was appointed a part-time member in 2011 for four years, which is very curious given the competition regulator has started a review of how competition and trade practices law will mesh with the proposed changes to the media rules. An organisation chart dated August 19 doesn’t list Sims among the part-time members of the authority. So what’s the delay?

Did Labor really save public servants?

‘An agency in crisis’: Human Services struggles under Centrelink debacle

Re: ARENA: Calling an agency “Renewable” invites it to be dismissed as a popular fantasy without basis in fact. After all, we are not running out of coal, gas, uranium or any other mineral. If instead the agency’s title included the word “Greenhouse”, its name would be pointing to an undeniable problem whose solutions would be administered by the agency.

Thanks for the updates on the F-35, most illuminating.
Every time we see Brendan Nelson preening in public we must remind ourselves he is responsible for this monumental (& expensive) dud.

Re the F35 storyline that keeps on giving . . . . Surely it is well passed time for the Government to deliver a comprehensive, factual update, either denying or fully under-writing support for the F35 capability to secure Australian air support against all comer(s).

The F35 is not a joke! It must be fully capable of air supremacy or purchase be terminated. No ifs or buts. Too often Australia has been left with defective American military hardware/software incapability. Rather the shame now . . . . than subjugation later!

This sentence is dreadful: ‘The Turnbull government is becoming as slow and controlling as the Abbott administration was insofar as making key appointments — so far as broadcasting policies are concerned. ‘

Try: ‘The Turnbull government is becoming as slow and controlling as the Abbott administration in making key appointments in broadcasting policy.’