Video of the day: When John met Angela (again)

John Oliver won an Emmy last year for Outstanding Variety Talk Series, delivering a very sweet speech in which he thanked mentor John Stewart and then asked to be played off. But the best bit came off stage, when Channel Ten’s Angela Bishop, who got the first question, pointed out that last year he had told her Donald Trump didn’t have a chance.

In his own defence, Oliver told Bishop: “Maybe check on the state of your own country’s immigration policies before you steer it too hard at this one.”

Oliver means Australia’s refugee policy but, like many global observers, seems unaware that Australia’s borders are far from closed to migrants. In 2014/15, Australia accepted 168,200 migrants — 0.7% of its nearly 24 million population at the time. In 2014, the United States of America had 1.3 million migrants move into the country, a figure that counts both lawful permanent residents and unauthorised immigrants. That’s 0.4% of its 319 million population. 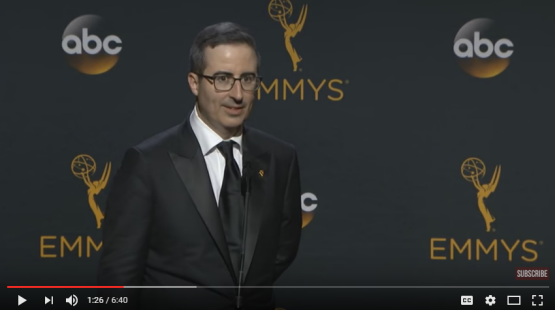