Lululemon's sponsorship of the event has blatant commercial benefits.

Last week in Sydney’s Barangaroo, ABC Classic FM threw a yoga party to the sounds of classical piano and cello. The event was to celebrate the launch of ABC Classic 2’s Classic Flow podcasts — designed as an accompaniment to yoga. The event video uploaded to Facebook shows several dozen yoga buffs moving to the music. But above the video, the post makes a curious mention:

“Join in from wherever you are in the world, as ABC Classic 2 Body Mind Life and lululemon athletica celebrate the launch of Classic Flow yoga.”

The words “Lululemon Athletica” link to Lululemon’s verified Facebook page. Meanwhile, the online ticketing page for the free event said the launch was “presented by the ABC and Lululemon Athetlica in collaboration with Barangaroo and BodyMindLife Yoga & Pilates”. 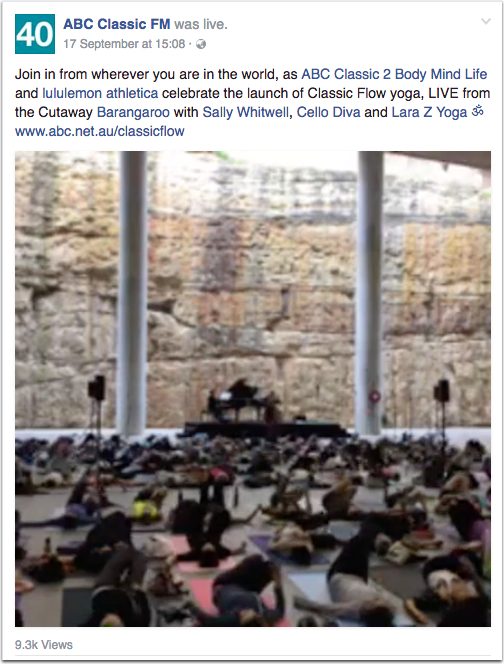 Lululemon Athletica is a high-priced sportswear brand targeted at wealthy women. It’s famous for its cult-like staff culture and for making clothing aimed at the thin and tall. It’s a slick, highly marketed commercial clothing brand — which begs the question: why is it being mentioned on the ABC?

The ABC’s charter prevents it from advertising on its broadcast channels, or on abc.net.au. But for many years at live events, the ABC has paired with corporate sponsors. The promotions though appear to have been quieter in the past (for previous ABC events, Crikey couldn’t find instances of sponsors being singled out on the ABC’s Facebook channels).

The ABC’s editorial guidance note on advertising and sponsorship states:

“References to a sponsor or a sponsor’s product or service must not be a condition of the sponsorship arrangement. Any sponsorship reference must be editorially justified.”

An ABC spokesperson told Crikey yesterday that Lululemon had signed a logo licence deal with ABC Events, a division of ABC Commercial, for the free launch event. The company covered the risk assessment, safety officers, security, cleaning, registration process and qualified yoga assistants who made the event possible. The company also paid an additional fee to ABC Commercial for the licence.

“Granting a logo licence is an established way of running a large-scale event,” the spokesperson said, offering Triple J’s Beat the Drum 40th anniversary concert and the Opera on the Harbour series as ABC productions that had involved similar logo licensing deals.

Lululemon’s sponsorship of the event has blatant commercial benefits. Few audiences are as valuable to advertisers as the wealthy people who listen to Classic FM, but the demographic is hard to reach, often favouring public broadcasting and other ad-free formats. Through funding Classic FM events, with the associated coverage on Facebook, advertisers have a unique opportunity to target classical buffs.

Lululemon has no involvement in the Classic Flow podcast itself. It’s entirely funded by the ABC, and Crikey is told the event was not promoted in the podcast. The Classic Flow homepage makes no mention of the event sponsors.

Earlier this month, the ABC signed commercial agreements with Australia Plus “foundation partners” Swisse, Monash University and the Victorian state government, which gave the three organisations “exclusive branding and advertising opportunities” across Australia Plus’ online, social media and TV presence, as well as ABC International events.

The Swisse partnership in particular was highly criticised, with The Checkout‘s executive producer Nick Murray questioning how the ABC would handle conflicts over coverage. “How is it going to be possible for the ABC to maintain relationships with commercial parties such as Swisse when it also broadcasts shows that Swisse dislikes? How will ABC management including Lynley Marshall and the managing director balance independent programming decisions with the commercial pressures from huge advertisers like Swisse?” he said on TV Tonight.

At the risk of lapsing into cliche leave our ABC alone.

So my cheque’s in the mail then, eh?