If you are a female athlete, which sport will pay you a living wage?

Say you’re a young woman who’s got the knack — you know, you can pick up a ball of any shape or size, or a bat, or a racquet and somehow always win best on field/court/ground — what sport should you choose as a career? Which one is going to pay you a living wage, cover insurance or provide childcare options in a job that requires regular interstate or international travel?

As the AFL races towards its first national women’s competition there are more and more professional or semi-professional leagues vying for a small pool of athletes, many of whom have shown that they can compete at the highest level in more than one discipline. Leagues might get to the point where they need to raise the money on offer to retain their stars — and the poaching has already started.

In the quickly growing world of women’s sport, pay rates for professional leagues vary wildly. So which sports have committed to equal pay, which are improving and which are lagging behind?

Netball — three feet away from the pack

Netball Australia recently announced a landmark deal for its players, with the average salary rising to $67,500 and the minimum salary at $27,375. The league has also made big steps when it comes to conditions other than pay, with all players to be given 12-month contracts and provisions for private health insurance up to $1500 and income protection for up to two years in the case of injury or pregnancy. The collective payment agreement also acknowledges the challenges players face juggling their part-time careers with their clubs, disallowing training between 11am and 4pm so players have the option to study or work as well. 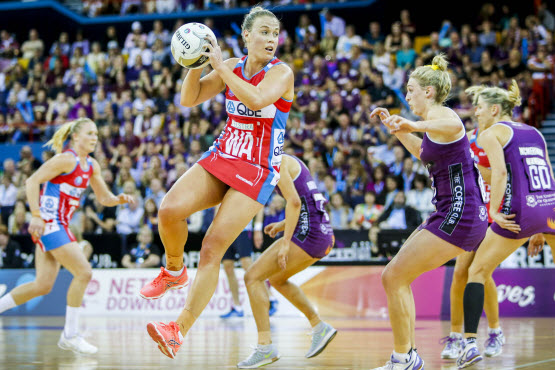 Clubs will also pay for children younger than 12 months, along with a carer, to travel with players. The pay deal comes off the back of a massive restructure of the ANZ Championship, with Australia and New Zealand to have separate competitions. The Nine Network has also agreed to a new broadcast deal that is designed to bring greater attention to the sport. The 80 players in the league will share in a total payment pool of $5.4 million, with each club having up to $675,000 to spend on its 10 players.

Cricket Australia has been moving ahead when it comes to pay rates for women, but the Southern Stars still trail the men. Earlier this year, it was announced that the Southern Stars’ maximum retainers would be increased from $49,000 a year to $65,000 a year and minimum payments from $19,000 to $40,000. In the women’s Big Bash League, the maximum retainer is at $15,000, while the minimum is at $7000. The Women’s National League has increased payments to $11,000, meaning that players who represent Australia internationally while playing all forms of the game at a domestic level could earn more than $100,000 a year, and domestic players earning a minimum retainer across test and Twenty 20 games would earn $28,000. 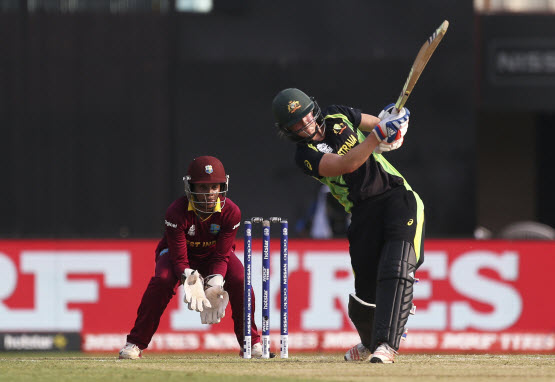 In the same announcement the Australian Cricketers’ Association said they were working towards an updated pregnancy policy and restrictions on training hours on weekdays. The ACA has also said it’s stumping up $500,000 for private health insurance for the players. The payment pool for women in cricket is $4.23 million, while some of the best male cricketers take home more than $2 million a year. Peter Lalor at The Australian reported at the time of the announcement that the ACA had originally made an offer of $1.45 million over the final figure, with the men willing to give up that money from their contracts in exchange for more involvement from the association and certain conditions guaranteed, but the offer was knocked back. The current pay deal is a 12-month one, and it is expected that the next pay deal will be a four-year agreement.

In contrast to the netball and cricket offerings, the AFL’s opening offer has been met with disappointment and anger from many in the community. The AFL’s fledgling league will offer a minimum of $5000 to players for the eight-week season, with two marquee players from each club set to earn $25,000 each. Players listed as a priority selection would take home $10,000 for the season. The AFL has said that it won’t pay for private health insurance for the players as part of their contracts, leading to the likelihood that a large chunk of that $5000 would go towards paying for cover. 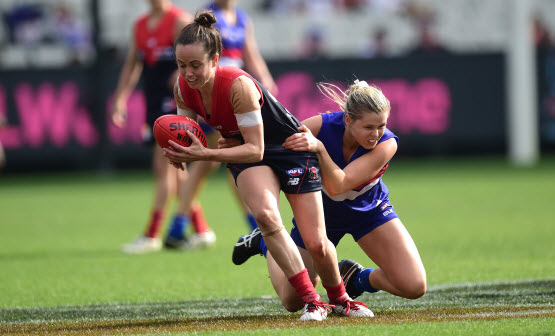 The AFL Players Association is in negotiation with the AFL on women’s pay rates for the start-up league, but has said that the two parties are “some distance apart” on terms. AFL boss Gil McLachlan has defended the numbers, pointing to the large investment that the AFL is making in the women’s competition and that they would be collectively earning $1.6 million.

“We’ll be spending five or six million dollars in investing in the league next year. In the eight teams, the women will be collectively earning about $1.6 million (and) the best players will be paid $25,000.”

“I understand the issue, but we’re building, and we’re investing in lots of different areas to ensure this is a success.”

The women’s pay rate currently on offer is well below the men’s league, with the average male player earning $302,104 for a 23-week season, in what is a full-time role. Rookies in the men’s league earn a minimum of $57,100 for a season and all players receive match payments on top of their base wages. 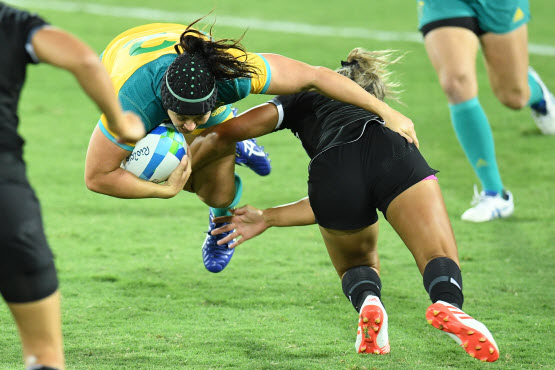 Even before the Australian rugby sevens team won gold in Rio, the Australian Rugby Union boss Bill Pulver had committed to move towards equal pay for the women’s team. The average female player for Australia earns around $55,000 while the average male player earns around $75,000. Pulver was quoted in the SMH saying “Our objective is absolutely to get to equal pay,” he said. “We’ve got a bit of work to do to achieve that, I absolutely acknowledge that. Right now there’s 10 men’s tournaments a year and five women’s tournaments a year, but they’re [both] professional for 12 months round. I would love to think [parity] is going to happen over the next couple of years.” The top women on the team earn up to $90,000, but base salaries are between $20,000 to $40,000. After winning a world championship and a gold medal within two years of turning professional puts the rugby sevens players in a good position to argue for more. 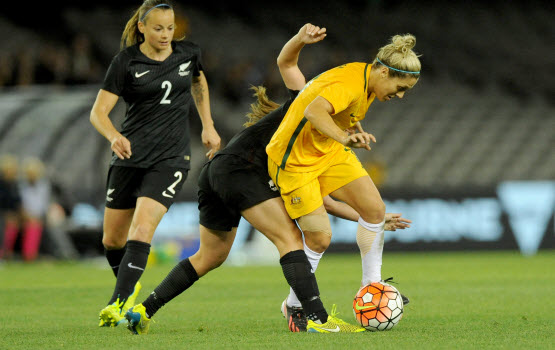 The Matildas’ pay dispute with the Football Federation of Australia came to the fore last year when Australia’s best female footballers went on strike over their pay and conditions, which included match payments of $500 and a base salary of $21,000. After negotiations late last year, the top base salary for our best female soccer players is $41,000, with a second tier of $30,000. Match fees are now $560 a game, leaving them well behind the Socceroos who earn at least six figure sums.

The domestic league pays even less, with SBS Zela reporting earlier this year that clubs have $150,000 as a salary cap for squads of 20 players. The expose also revealed that players feel they receive very little support, with no minimum medical standards and access to coaches and grounds difficult to find. Some players reported that they weren’t making any money at all by playing for the W-League. The W-League is reportedly set to bring in new base standards for the 2016-17 season, whereas the league currently does not have a minimum level of pay.

While many women will find a way to play the sport they love, in the increasingly competitive world of women’s sport, to attract the best players, the different leagues around the country will be comparing their offerings  — as will the players.

Alcohol ads, or cricket for the disabled: you decide

The problem might be that women are smaller, weaker and slower than men, so a women’s game will never provide the spectacle of a men’s game.
There, I’ve said it.

So you’re saying that they have to rely on skills instead of brawn? That sounds like it would make for much more interesting games.

Which is why women’s tennis remained interesting long after the men’s game went kapow, boom, bang.

The thing is that these are businesses as much as sports codes. And some businesses are more successful than others and generate more revenue, thus enabling a higher reward for the key players. The one area where women deserve heaps more than the men is in soccer, where women have shone and men have been duds.

Hear, hear. After decades of the Socceroos and the mens’ national league disappointing and boring me, I watched more soccer following the Matildas’ exciting 2015 Womens World Cup campaign than I have for many a year.

Our women’s cricketers have also just taken a 2-0 series lead in Sri Lanka! A few of our women’s squads are giving us very exciting sport to watch 🙂

I’m not sure in what world the AFL is at fault for paying women far more than they’re worth in the inaugural season of a competition. The women’s game standard is really aiming for VFL at best, but for a far shorter season and relatively tiny work commitment. VFL players play for a full winter of over 20+ games and will probably attract similar crowds and TV ratings, for about the same amount of money.

Why does the writer think that it’s so obvious that it goes without saying that in sports with both female and male teams, the women should be paid the same as men? In each of the examples of sports where there is both a men’s and women’s game, the men’s game has a far larger audience and earns vastly more revenue.

Women’s sport is great, there should be more of it and if all of us watched more of it, it would be a better world. At the moment, most of these codes are actually paying women players a higher share of revenue than men get, in order to professionalise the sports and position them to grow their audience and revenue in the future.

This is what they should be doing, and they probably don’t need to be congratulated for it, but nor should they be subject to simplistic complaints that they have not been able to require audiences to fundamentally alter their viewing habits overnight.

Hi Mork, I don’t think I ever say that women should be paid the same as men, but more make the point that in many of these sports, the women who are the best in the country are not paid a wage that would allow them to play the sport fulltime, without another source of income. In the case of the AFL, new teams like the Gold Coast and GWS have been fully subsidised by the league as they grow – their players aren’t on a lower wage because their teams aren’t profitable yet. If women, even at the highest levels of their sports, are constantly trying to juggle multiple jobs, or even spending more money than they make to be able to play (like in the W League), that is a barrier to the quality of the sport improving and becoming more attractive to watch and more profitable.

Does this mean that the men in the national male netball competition are getting a pay rise too?