The small Dutch software company says that the multinational media company took its code, and won't reply to emails about the story.

A Dutch multimedia journalism company has taken a swing at multinational media company Al Jazeera over an article it claims the Qatar-based network republished — complete with Danish source code — without permission. Scrollytelling, a journalism company that specialises in online multimedia projects (articles that include videos, pictures and text on one page), wrote to Al Jazeera on its own website, saying multiple attempts to contact Al Jazeera had been ignored.

“Initially we were taken aback and confused. We knew there must be some mistake. We contacted the author of the piece, Hidde Boersma, who told us he sold his piece to you. This is fine. Our source code however was not included in the sale, nor could it have been. Hidde promised to resolve the situation. In addition we contacted you directly too. After waiting patiently we received no response. After many tries through your editorial office we got hold of an editor who promised to return our call. This never happened either. As a final measure we sent you a DMCA takedown request and waited patiently. No response.”

The story, which originally ran in Dutch newspaper de Volkskrant in May, was republished in Al Jazeera, and Martijn Van Tol and Joost Baaij from Scrollytelling say their source code was stolen as well, but badly:

“To add insult to injury, you didn’t do a great job at ripping the code either. The social sharing doesn’t work, the ‘audio off’ option is gone, and the animations are glitchy and let’s not get started on how the slide transition is just plain messy. Your video doesn’t seem to be globally distributed like ours, and the story isn’t on https.” 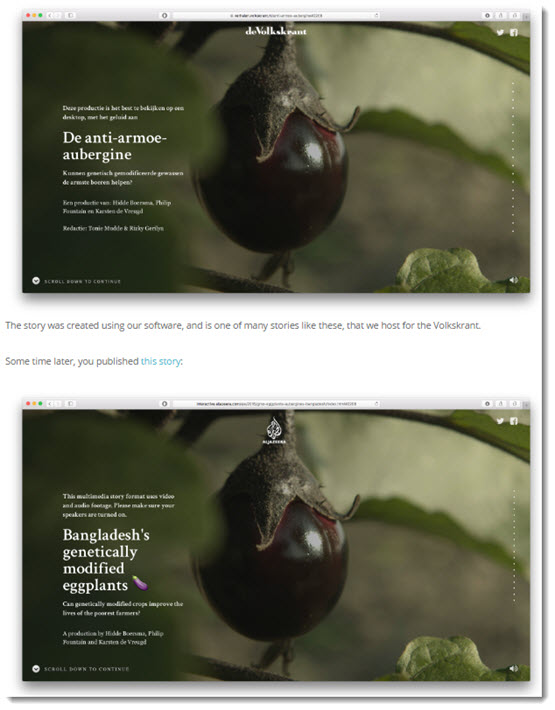 Searching times for small business. Break up, make up or go down?

Census site by students not all its cracked up to be