The Weekend Australian revealed too much about the woman who accused Jamie Briggs of inappropriate behaviour in a Hong Kong bar, says the Press Council.

The Weekend Australian shouldn’t have published so many details about the woman who accused Jamie Briggs of harassment in a Hong Kong nightclub, the Australian Press Council has ruled.

In January, the Oz was heavily criticised for an article that revealed many details about the public servant but did not name her, and included her pixelated image. In an adjudication published in The Weekend Australian on Saturday, the council states that it “accepted the publication intended in good faith to protect the privacy of the woman by withholding her name and pixilating [sic] her image. However, it did not consider sufficient steps were taken to protect the woman’s reasonable expectation of privacy.” 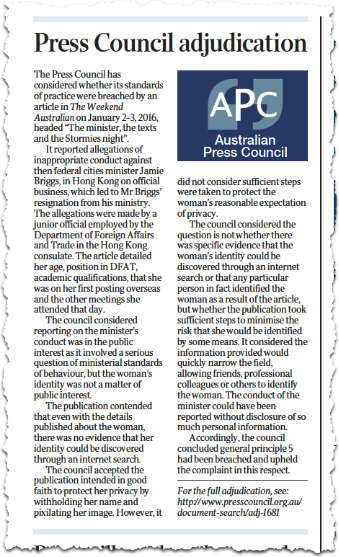 The Oz argued that reporting the woman’s age, as well as the fact that it was her first overseas posting, was intended to convey her inexperience, “and so her greater vulnerability”. It also published her specific position with the Department of Foreign Affairs and Trade and her academic qualifications. “The publication contended that even with the details published about the woman, there was no evidence that her identity could be discovered through an Internet search,” the adjudication states.

But thee Press Council said that wasn’t really the point. “The Council considers that the information provided in the article would quickly narrow the field, allowing friends, professional colleagues or others to identify the woman,” the adjudication states.

“This matter highlights for all publications the need to exercise care with respect to protecting the anonymity of individuals where this is appropriate. Where it once may have been sufficient simply to suppress a name or pixilate an image, greater care must now be taken in an era of powerful search engine capability.”

Then and now: The Australian’s changing tune on the Press Council