Trump used a segment with a celebrity doctor to answer questions about his own health.

After weeks of controversy about Hillary Clinton’s health, Donald Trump has released his own health records, in a television interview with celebrity talk show host Dr Oz. The records are detailed and lists a clean bill of health. The letter, from Dr Harold N Bornstein, revealed that he had only been hospitalised once, and this about his height and weight: 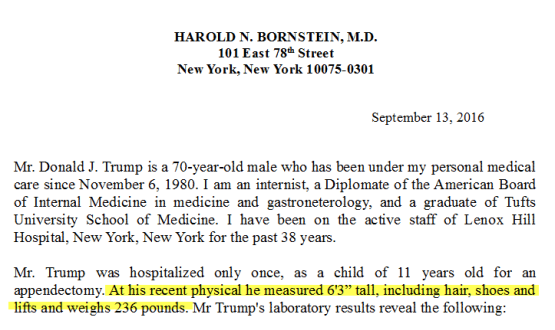 “I think if I had one thing, I’d like to lose weight,” Trump told the doctor. “It’s tough because of the way I live, but the one thing I would like to do is be able to drop 15, 20 pounds.”

We are most intrigued that his legendary hair is included in his height measurement, and also that he wears lifts in his shoes.