The AFP has not been called in to investigate a damaging leak against Labor from Treasury in the lead-up to the budget in May.

Treasury has indicated it isn’t pursuing the source of a leak to Laurie Oakes that was damaging to Labor in the lead up to the election.

In the week leading up to the budget, Nine’s veteran political editor Laurie Oakes hit upon every politician’s worst fear: he had obtained a leak. 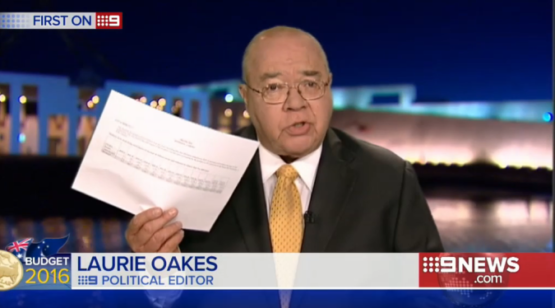 The Treasury document obtained by Oakes forecast that Labor’s planned tobacco excise would raise $28.2 billion over 10 years — close to $20 billion less than Labor had modeled. It was quickly seized upon by the government, claiming that it was another budget black hole for Labor.

Labor’s leader in the Senate, Penny Wong asked Treasury just before the election whether it had referred the leak to the AFP, as NBN Co did with damaging leaks about the state of the national broadband network. In a response published this week, Treasury said it did not intend to pursue Oakes’ sources because the safeguards in place to protect budget information before the budget were secure.

“During the lead up to the Budget, Treasury put in place significant additional arrangements to safeguard confidential information such as restricting access to documents on a strict need-to-know basis and further limitations on the attendance of personnel at critical meetings. On being made aware that Mr Oakes was in possession of a document purported to contain confidential information, appropriate enquiries within the Treasury were made and it was judged that those safeguards continued to be appropriate.”

Treasury described the leak as “disappointing”.

The Department of Prime Minister and Cabinet indicated it was still investigating two leaks from within the department as of May 5, 2016. We assume one is related to the draft defence white paper, which Prime Minister Malcolm Turnbull already confirmed was referred to the AFP for investigation.

Government doesn’t pursue source of leak in its favour.
Knock me down with a feather.