Former motoring enthusiast senator Ricky Muir announced on Facebook that he has bought a small business, but he hasn't said farewell to politics.

As Crikey tracks the careers of the politicians cleaned out in Malcolm Turnbull’s double dissolution election, we find that former senator Ricky Muir has moved on from the halls of Parliament to become his own boss — buying Canningvale Timber in Heyfield, East Gippsland.

“Soon Canningvale Timber will be fully transitioned into Muir Timber and our next journey will be in full swing,” Muir wrote on Facebook.

“It only makes sense that the former timber worker come Senator would end up going back to an industry he knows and loves. But I must admit, I never saw myself actually owning our own milling business.”

The former Motoring Enthusiast senator has worked in timber mills before and campaigned to save jobs in local mills in his time as a senator. Muir wrote that although he and his wife, Kerri-Anne, would be focusing on learning the ropes of small business for the foreseeable future, he could still be back in politics. “Does this mean that our political journey is over? Nope! When the time is right I will strike again.” 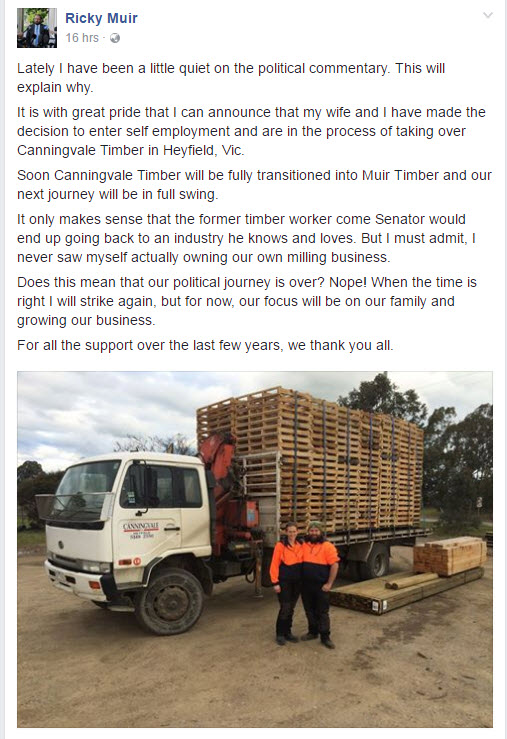 Ricky get your gun

pretty sure it’s a timber mill, not a paper mill – might need to change the heading there.

The business has been there about 20 years, making pallets. It is certainly not a paper mill, which would have required rather more than Ricky’s Senate payout to finance.

Wish him well. Malcolm must be pleased getting rid of Ricky, now he has clever people left to deal with, not.