What do Australians really think about offshore detention?

Former Department of Immigration staffer Henry Sherrell separates the signal from the noise when it comes to public opinion about Australia's treatment of asylum seekers.

In the last week of the election campaign, The Australia Institute released a poll claiming a majority of the public wanted changes to asylum policy. From The Guardian:

“A poll of more than 1,400 people commissioned by The Australia Institute found 63% of respondents oppose the bipartisan policy that refugees who arrive in Australia by boat should never be allowed to settle in the country, instead saying those found to have a valid claim for protection should be brought to Australia.”

In reporting this poll, Ben Doherty went to some length to demonstrate the validity. For example, the cross-tabs of the poll were published and it was highlighted how the poll was “a nationally representative sample”:

“‘The vast bulk of political discourse from the major parties on this issue has been broad “tough on border security” rhetoric. And while that tone may be perceived to be popular, the actual details of the policy do not appear to have public support.'”

I have no doubt this poll was commissioned and released to have the maximum political impact, because those at The Australia Institute are very good at what they do. Doherty is also an excellent journalist whom I respect. However, I had difficulty believing this particular story and poll. I thought of this today as there was a similar poll, this time commissioned by Save The Children:

“Pressure is mounting on Malcolm Turnbull to end detention of refugees on Nauru and Manus Island, ahead of two summits at which world leaders will discuss the global crisis.

“Save the Children released the results of a poll on Wednesday that show that two-thirds (66%) of Australians believe the prime minister should act urgently to resettle refugees held in offshore detention by the end of the year.”

I want to be clear. I’m not saying these polls have been deliberately doctored by advocate organisations to get specific results. The second poll was undertaken by Galaxy, a respected polling organisation. But the results simply do not accord with what we know about public opinion and asylum policy in Australia over the last 15+ years.

The most important current factor driving public opinion is absence of boats arriving (noting there are still boats leaving and being turned back). For example, in both 2012 and 2013, about 12% of the population thought asylum policy was the most important issue facing Australia. This is from the long-running Scanlon Foundation social cohesion survey (Table 8, page 21). The following year in 2014, this had fallen away to 4% (Table 9, page 22). This means regardless of the numbers supporting or opposing a suggested policy option from The Australia Institute or Save The Children, the issue as a whole is not registering in public opinion.

This Scanlon research is careful and methodical, now supported by a dataset of over 25,000 people stretching over a decade. It is not a snapshot, devoid of context in a highly charged political debate. It is supported by numerous Lowy Institute polls and also work out of ANU. For example:

“ANU Poll, March 2015 (Report No. 18, April 2015) asked respondents to indicate agreement or disagreement with the proposition that ‘Australia should take stronger measures to exclude illegal immigrants’. The term ‘illegal immigrants’ was not defined, although in the context of current political discussion it can be assumed that many, perhaps a large majority, would see the question as referring to asylum seekers arriving by boat. 65% agreed (38% strongly agree), 32% disagreed (11% strongly disagree).”

For a comprehensive list of sources on public opinion and asylum, see here. Taken over a longer-time frame and rooted in strong methodology, it shows a relatively static picture: 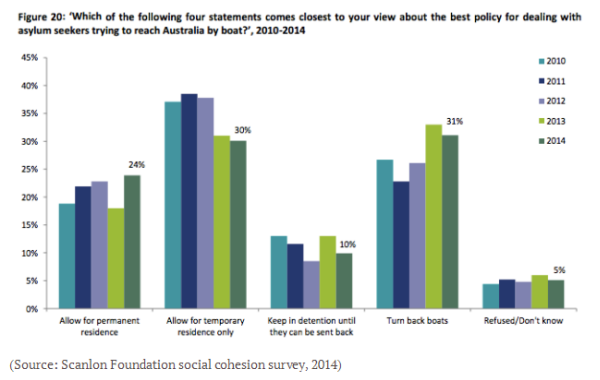 This is clear, cold evidence that public opinion is distinctly divided in Australia on the topic of asylum. Hardened positions do not change overnight on policies that have been contentious for such a period of time. For people who despair at the status quo, and I include myself here, trying to trick ourselves into believing the public is onside is a dangerous game which will end in failure. I previously thought the death of Reza Barati would lead to at least marginal change in public opinion but that never eventuated.

As I said previously, this does not mean advocate organisations are deliberating juking the stats to get their preferred outcome. The strategy behind the polls is quite clear: demonstrate the Australian people are ahead of the curve and use this to push for policy change. The numbers in both the pre-election poll and the poll today might hold up in a vacuum — about two out of three people wanting some type of change — but the fundamentals of public opinion and policy change don’t operate in a vacuum. For example, at the election, asylum policy wasn’t even a top 10 political issue. It might have been kicked along by Peter Dutton and The Daily Telegraph but it didn’t register in the way other issues did.

I spent about eight weeks in suburban Sydney and it was raised with me a number of times, mostly in the negative sense by people worried Labor would bring back the boats. Away from the personal experience, Malcolm Turnbull ignored numerous occasions to jump into the asylum debate while Bill Shorten stayed as far away as possible. The Greens — a party where asylum policy has come to be perhaps the defining issue — were largely unsuccessful, going backwards in the Senate and failing to capture additional inner-city electorates. To me, this combination of events reflects what we previously knew.

Asylum policy doesn’t register as a mover of political opinions in the manner advocates need. It is stuck, regardless of the compassion people might feel, regardless of the outrage. Politicians and other decision-makers know this public opinion better than most. They consume it and know when it actually cuts through. These advocate-sponsored polls might show what they say they show but this sentiment is not fixed or grounded in anything stronger than what someone read that morning over breakfast in their Facebook feed. They might show that when people aren’t thinking about these issues, their opinions become softer. However this doesn’t help the poor souls stuck on Manus as there is no impetus to change.

The political ramifications of this are clear: Malcolm Turnbull is not under any domestic political pressure at all to accept New Zealand’s offer of 150 asylum seekers per year. In fact, he is under pressure to do the opposite and hold the line for another three years. I used to believe he would have to do something about Nauru and Manus but, today, I don’t see how this arises. This is why New Zealand’s standing offer has not been accepted.

I genuinely hope the Prime Minister is working on a plan away from the day-to-day media cycle, a battle he would certainly lose to his conservative caucus. The New Zealand offer will hopefully make up a part of this response. Until then, other factors will push and pull at the margins of asylum policy. For example, recent pressure has reportedly come behind the scenes from Barack Obama, as he prepares to host a global summit of humanitarian resettlement. There was speculation countries had to commit a specific number of new resettlement places to score an invite to his summit. We’ll see if this holds up over the weekend.

I don’t want to say stop to any advocates doing what they think is the best response to the current policy mess. Save The Children and The Australia Institute have savvy, smart political operators working on these campaigns. But I feel the only thing these polls achieve is getting people already onboard, amped up, only to be deflated shortly afterwards.

*This article was originally published at On The Move

That is one of the bigger problems with this debate, and it makes the whole situation absurd.

The ‘vote winner’ argument is ripped to shreds when viewed in light of the indifference of the electorate. Who was this policy even for? People don’t vote to stop the boats, every now and then the political class gets hysterical and constructs island death camps for no particular reason. Then they go to an election all shouting about how they will stop boats betterer than the other fella. The result of the election ends up telling you nothing, anyone voting Green is already on board with the rest of the platform, the people voting Liberal and Labor likewise. Meanwhile Tones himself sank like a rock in the polls while doing his utmost to stop boats. Before that the ALP unleashed horrors and lost the election to, ahahaha, Tony Abbott.

But as you say, this also tells us that even if told about contractors on the public teat, straight up torture and abuse, the fascists in the department like The Pezz, multiple people setting themselves on fire, withheld abortion followed by spitting in PNGs face, the soft coup in Nauru, that time we caused someone to drown after turning their boat around, the month long prison ship internment of some refugees, Kiwis on Christmas Island having a riot over how crap it all is, the Australian people don’t much care.

An end to this must come from the system itself. This isn’t the problem of the Australian people, and voters are smart enough to realize it.

Draco – the voters (for T1&T2 – approx. 80%) may be smart (though I doubt & deny this) but the point is that they don’t give a shit.
It really hit me when a friend, on seeing the first evidence of abuse of children some years ago, said that women, no matter their politics, would not accept such treatment. She now knows how wrong she was.